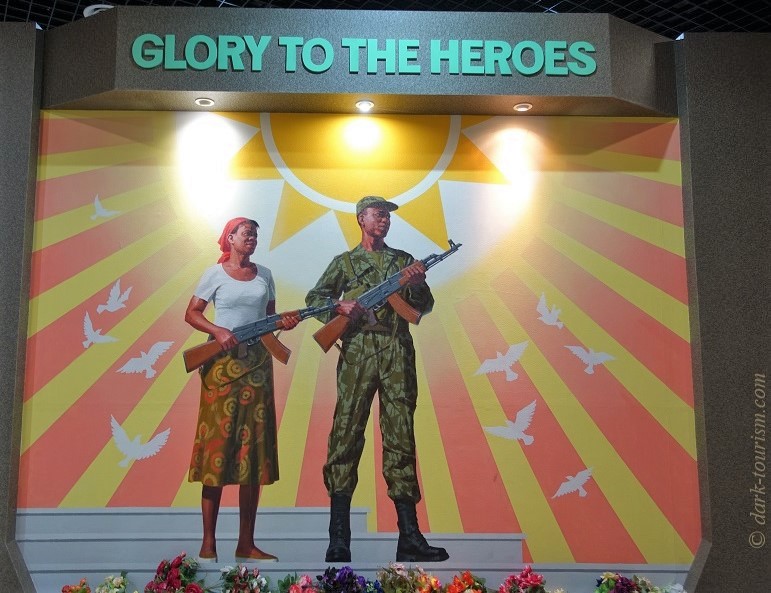 Many readers will wonder what the south-west African country of Namibia, one of the best-functioning democracies of the continent, can possibly have to do with North Korea, that staunch ultra-communist dictatorial hermit country in the far east of Asia. But there is a link. This:

The Mansudae Art Studio in Pyongyang. North Korea has a massive demand for propaganda posters, monuments and other socialist-realist art, and most of that is produced by the Mansudae Studio. It’s a veritable industry. The studio, founded in 1959, currently employs some 4000 people, a thousand of them artists, the best of the best, hand-picked from academies across the country. It’s a privileged job and the Studio’s output can be seen all over North Korea. So big is the “industry” that it also has an “Overseas Projects” branch, offering their services to other countries – at competitive prices. And several countries have indeed taken up that offer over the years, mostly in Africa, including Namibia.

When Namibia’s first president since independence in 1990, Sam Nujoma, saw the monumental burial ground and national monument called “Heroes Acre” in Zimbabwe he decided he wanted something like that for Namibia too. And so he commissioned it from the same art studio: Mansudae. The result, also called “Heroes’ Acre” and opened in 2002, is grandiose. Here’s a panoramic view of the main part of the complex:

Behind the eternal flame at the front, steps lead up a terraced slope – to the side of the steps are rows of graves, some only symbolic, of those noted “heroes” who fought for Namibian independence. At the top is a monumental complex dominated by a white obelisk and a bronze statue of an “unknown soldier” (whose face, however, looks uncannily like Sam Nujoma’s in younger years):

The soldier statue, brandishing a hand grenade and a machine gun is already quite North-Korean in style. But the real hallmarks of Mansudae’s style can be found in the form of a series of large bronze bas-reliefs on a wall behind the central obelisk. Here’s one:

The final relief is especially North-Korean-esque, featuring a victorious Sam Nujoma waving a flag in front of marching freedom fighters and cheering civilians:

Now compare that to a bronze relief I spotted in North Korea (actually part of the “Reunification Monument” in Pyongyang):

And as for bronze statues, consider these in front of the tall “Juche Tower” (itself one of the grandest monuments in North Korea):

The very grandest and best-known work of the Mansudae Art Studio, however, is this 20m tall statue of Kim Il-sung at Mansu Hill Grand Monument:

You can tell it’s an old photo – hence also the low quality, as it was taken in 2005 with my first digital camera (which had a then “massive” 2.1 megapixels – how time flies), because since 2012 the “Great Leader” Kim Il-sung has been joined by a similar statue of the same height of his late successor, the “Dear Leader” Kim Jong-il. Maybe one day it will become a trio, when the current “Supreme Leader” Kim Jong-un pops his clogs too.

But these giant statues aren’t the tallest ones that the Mansudae Studio has ever created. The very biggest, by quite a margin, is the “African Renaissance Monument” in Dakar, Senegal, which stands at over 50m tall:

But back to Namibia. In 2014, the National Independence Memorial Museum was opened right in the centre of the capital Windhoek. This too was designed and built by Mansudae’s “Overseas Projects” branch. In front of the museum stands a statue (also designed by Mansudae) of Sam Nujoma holding up a copy of Namibia’s constitution:

The architecture of the museum building is certainly striking, though it’s controversial, partly because it so starkly contrasts with the colonial-era historical buildings in its immediate vicinity (such as the Alte Feste and the Christuskirche – see Windhoek):

The exhibition inside covers the colonial era and the resistance against it, the long Namibian War of Independence against South-African rule and the UN-assisted path towards independence in 1990. In addition to some authentic artefacts and lots of historical photos there’s also plenty of Mansudae-designed interior art to be seen. Here’s an example, a bas-relief depicting one of the atrocities perpetrated by the German “Schutztruppe” (literally ‘protection force’, the cynical name given to the colonial military):

And then there are the paintings. Most are huge and depict battle scenes or amassed freedom fighters, but towards the end of the Independence War section visitors find this incredibly kitschy example with just two “heroes” (same photo as the one featured at the top of this post):

When I saw this I thought it could hardly be beaten in its over-the-top-ness, but not much later I found another clear contender:

I presume the group of figures in front of the very content-looking outline of Sam Nujoma is supposed to represent the diverse population of Namibia. Note also the flag-waving, cheering masses in the background in front of a very un-Namibian skyline of skyscrapers on the right-hand side.

For stylistic comparison, here’s just one example of the countless propaganda posters you encounter in North Korea itself:

The Heroes’ Acre and the Independence Museum are not the only works in Namibia commissioned from the Mansudae Studio. The New State House and the Okahandja Military Museum were also built by the Studio’s “Oversees Projects” branch – but neither are apparently open to the public.

Directly behind the Independence Museum, however, is yet another public monument designed by Mansudae, namely this:

This commemorates the victims of the genocide against the Herero and Nama people at the hands of the German “Schutztruppe” between 1904 and 1907 (see Namibian history). It stands directly in front of the Alte Feste (‘old fort’), the oldest building in Windhoek and originally the headquarters of the Schutztruppe.

But so much for the curious artistic link between Namibia and North Korea.

For more on Mansudae’s Oversees Projects see this article (external link – opens in a new tab). It has quite a few little errors in the text but provides a good overview and plenty of photos.