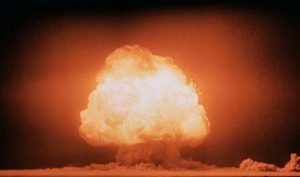 On this day, 75 years ago, on 16 July 1945, the first atomic bomb explosion was set off in what was called the “Trinity” test in the desert near Alamogordo, New Mexico, USA. The image above is a historic photo of the mushroom cloud that formed shortly after the detonation. The whole event was meticulously documented, including by means of super-high-speed cameras. Here’s another example; it shows