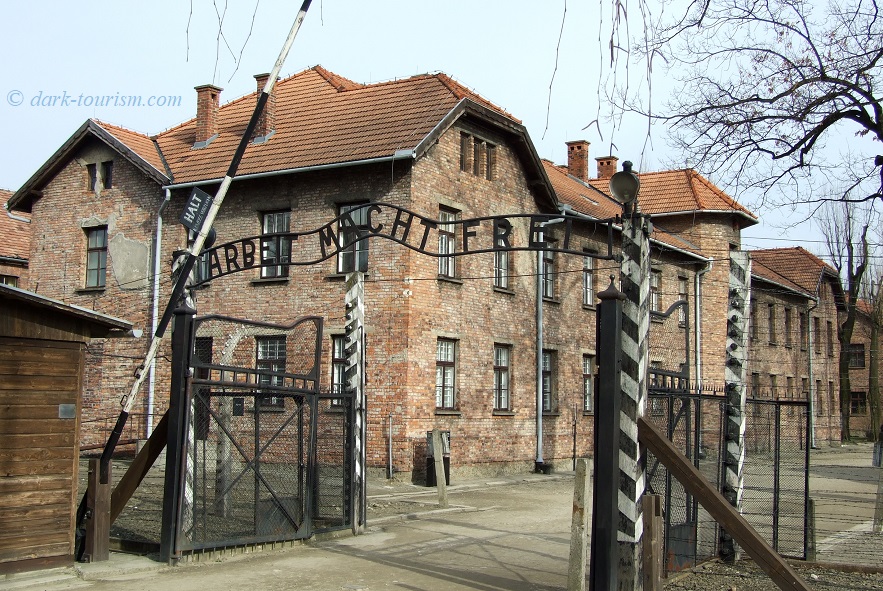 On this Day it’s International Holocaust Remembrance Day. The date was chosen because it was on this Day 76 years ago that Auschwitz was liberated. The above photo shows what is perhaps the most iconic item of the whole memorial site today, the sign “Arbeit macht frei” above the main gate to the “Stammlager”, Auschwitz I. The photo was taken in 2008, so it was still the original. In 2009 it was stolen (see below), but recovered. But after this shocking incident the original was henceforth stored in a more secure place and at the original site a replica was re-installed.

On my former Facebook page, which was purged last April after five years of running without problems, I used to mark this date most years with either a photo from Auschwitz taken by myself or with some links related to the topic and some comments of my own. Today gives me an opportunity to bring all these posts up again together – they’re taken from my archives and only slightly adapted for this blog post. So here we go, in chronological order:

On this Day: it is Auschwitz Day, or International Holocaust Remembrance Day – as 71 years ago, on 27 January 1945, the Soviet Red Army liberated the largest and deadliest of all concentration camps ever, Auschwitz-Birkenau.

The photo shows one of the “living quarter” barracks at the Birkenau site. Empty except for the equally empty bunk “beds”, but with just a bit of imagination you can picture the full grim horror of the place … easily one of the darkest sites on Earth, if not THE darkest of them all.

The next day I posted this follow-up:

The reason I’m posting this is because this same image featured in an impressive programme on the German cultural channel 3Sat that I watched yesterday evening. It was a documentary following three different groups of young people on their visit to the Auschwitz memorial site – a school group, a group of prospective policemen/women (who went there as part of their training) and a group from a home for ‘difficult juveniles’ (“schwererziehbare Jugendliche”). The programme makers wanted to find out what it does to people when they visit Auschwitz. What they found was incredibly moving and revealing.

I found it also proved a number of things that are very important to me as well: a) it is vital that we have this memorial (and others of its type), b) it is evident that it makes a incalculably huge difference whether you just read about such a place or if you actually go to see it with your own eyes – being right where it all happened just cannot be substituted by anything else – and c) despite the difficult nature of the memorial, and despite all the criticism it had to endure, I think the site’s management is actually doing a very good job (in commodification, preservation, crowd management and education).

I highly recommend to all followers and visitors of this page who can understand German to watch that programme. It’s available on YouTube.

Now back to today’s photo. This was taken in the Birkenau part of the memorial, more precisely in the part referred to as “Canada”. This was where all the belongings of those killed in the gas chambers were sorted (“Canada” because that country “was seen as a land of plenty”, according to Wikipedia). Amongst those belongings were also plenty of personal photographs. In the mid-2000s, a new section was opened at Birkenau in one of the “Canada” halls where a selection of these photos was put on display on a wall. Otherwise the room was left empty. As you enter you see what this photo shows. Just the wall of photos, reflected upside down on the shiny polished floor, but you can’t yet make out individual photos. This changes as you get closer and you can connect with the individual photos.

I found this an enormously effective way of trying to at least symbolically give the victims back some of their individuality that was so brutally taken from them by the Nazis. In fact, I found this part of Auschwitz-Birkenau even more effective and moving than all those heaps of shoes, hair, suitcases, etc. on display in the old main museum at Auschwitz I (i.e. in the “Stammlager”).

The personal photos on display on this wall show weddings, babies, family gatherings and the like – so images from happier days. It shows that the victims all had their individual life stories, their own personalities, their own happinesses and tragedies. It thus counters Stalin’s infamous line “one death is a tragedy, a million deaths is a statistic”. No, if portrayed like this, a million deaths is still a million tragedies, and not just the statistic that the perpetrators (!) would like it to be. And that is so important to underscore.

One particular photo that sticks in my memory more than most is that of a woman, elegantly dressed in fashionable period attire, saying cheers to the camera with a glass of wine and smiling broadly. This same photo also featured in that TV programme yesterday and brought back memories.

A visit to Auschwitz really does change you – and with lasting effect, as I experienced again watching that programme yesterday. As my guide back then emphasized: “Das muss man gesehen haben!” (‘you HAVE to have seen this!’) … I couldn’t agree more.

On this Day: it’s Auschwitz Day – or ‘International Holocaust Remembrance Day’ – marking the anniversary (this year it’s the 72nd) of the day the Soviet Red Army liberated Auschwitz in 1945.

The name Auschwitz has become almost synonymous with the Holocaust as such (it’s often used as a metonym to refer to the whole Shoah). The actual sites of the concentration camps/labour camp/death camp of Auschwitz (there were actually three separate main sites with different roles) are thus the foremost memorials of this greatest ever crime against humanity.

As such, Auschwitz must be the most difficult dark sites to manage too – and indeed it struggles with the sheer numbers of visitors and has often been the subject of criticism regarding exactly how the Holocaust is to be commemorated at this site. In many ways it’s such a tall order that it is practically impossible to get it right.

The article linked to above raises a few very valid questions about all this. I share the author’s respect for the site management’s efforts in general, but also some of the caveats. Some of these, however, simply stem from the fact that at Auschwitz dark tourism meets mass tourism. Crowd control alone necessarily entails some detraction from the solemn commemorative function that the more or less authentic sites of Auschwitz I (Stammlager) and Auschwitz-Birkenau should fulfil.

The article is a little bit one-sided, though, by addressing only the management issues of authenticity, reconstruction and the use of some of the buildings for ancillary touristic functions (esp. the infamous gatehouse of Birkenau – which is indeed problematic). But it does not address the issue of visitor behaviour – even though the title photo shows a prime example of highly dubious visitor antics.

Wielding a selfie stick right underneath the infamous “Arbeit Macht Frei” sign at Auschwitz is probably as disrespectful as any tourists’ behaviour can get. If contemporary visitors really cannot sense for themselves that at such a place their smartphones are NOT the most important things in the world, then I think they will have to be told so, and that the site management should enforce this. (It can be done – e.g. in Tallinn, Estonia, selfie sticks are now banned on the Old Town Square and the fines for violating that ban are hefty). I’m always shocked when I read about, or have to witness, such despicable visitor misconduct – and it irritates me that such behaviour is then used in the media to give all of dark tourism a bad name (not in this article, though, thankfully).

Another thing: the fact that the infamous “Arbeit Macht Frei” sign of Auschwitz 1 is not authentic but a copy, as the article’s author complains, should perhaps be explained too. It’s because the original sign was stolen in 2009 (a spectacular and shocking story at the time in itself), and even though it was later recovered, it was decided to keep the original in a safer place in future and put a replica up in the original location. So it’s for very good reasons, not out of negligence with regard to preserving authenticity.

But as I already said above, at Auschwitz it is pretty much impossible to get everything right to satisfy everybody and their expectations as to what the memorial should or should not be, do, look like, and how it should manage the crowds, etc., etc.

On this anniversary I didn’t post anything because I was still in hospital following an operation, but a few days later I posted this:

Since I missed International Holocaust Remembrance Day last Sunday (due to being in hospital), I make up for it by sharing a rather worrying article about the growing ignorance with regard to this topic within the UK …

<comment: and here is the original bulletin by the HMDT: https://www.hmd.org.uk/news/we-release-research-to-mark-holocaust-memorial-day-2019/ >

The date was chosen because it was on this day, 75 years ago, on 27 January 1945, that the Red Army liberated the concentration camp of Auschwitz.

This photo, which I took back in 2008, shows the end of the railway line inside Auschwitz II Birkenau (you can faintly make out that iconic gatehouse in the background – this also gives you an indication of just how vast this whole site is). This particular spot forms part of the main memorial monument site inside the former camp near where the gas chambers and crematoria used to stand (the SS blew them up before “evacuating” Auschwitz, so there are only some broken ruins left).

And some delegation from Israel must have left these wreaths in the colours of Israel’s national flag.

I presume no historical background info is really required here – everybody knows about Auschwitz, I trust. But actually going to the site is one of the eeriest and most profound things you can do within the world of dark tourism. And as my Polish guide said: “Das muss man gesehen haben!” (‘this is something one has to have seen!’). I had booked a German-speaking guide because none speaking English were available at the time, and in hindsight I am very glad I did, because I’m actually quite fond of German spoken in a heavy Polish accent … and in a way this also lent a certain additional level of authenticity to the whole experience. 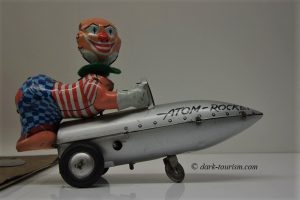 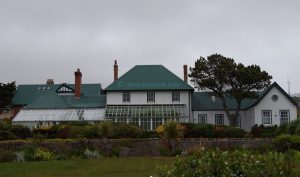 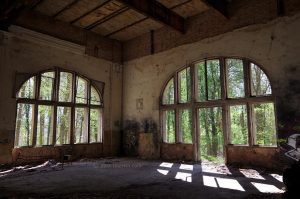