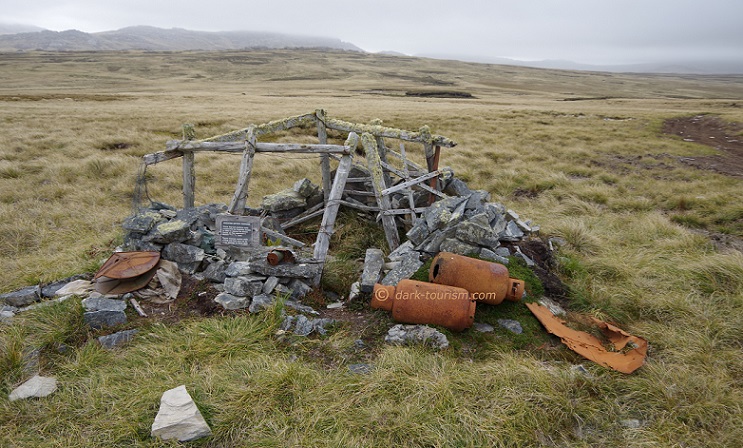 38 Years since the End of the Falklands War

The photo above shows an abandoned Argentine position near Wireless Ridge, north-east of Mt Longdon, not far from the islands’ capital Stanley. This position is comparatively well preserved. My guide even pulled out some hidden personal items left behind by the soldiers.

After showing me this tube of toothpaste, and a shaving kit also found there, my guide put them back into their hidden place, well out of view to the uninitiated. And I will not give away where they were found either. Battlefield relic souvenir hunters have already taken too much away as it is. 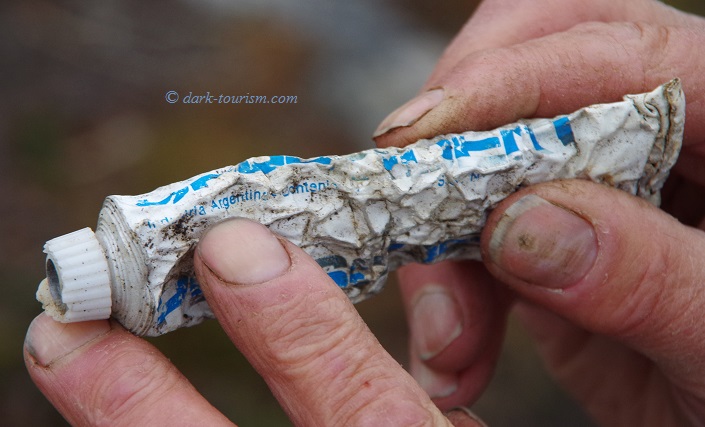 My guide, by the way, was Patrick Watts, himself a war witness and veteran of sorts: he manned the Falkland Islands’ radio station at the time of the invasion, and for some 13 hours was busy disseminating all the information he could get hold of to keep the islanders informed of what was happening. When the Argentine soldiers finally arrived in the studio and seized control, he opted for the offer of staying and working for the invaders – on the reasoning that he thought it would be better if his fellow islanders heard the orders and announcements by the new masters in a voice they were familiar with rather than some heavily accented broken English by one of the Argentinians. After the war Patrick became an ardent battlefield archaeologist and chronicler of the war, so I was in the most competent company I could possible have wished for. And a really likeable guy he was too. I still feel privileged to have had him as my guide on this tour of the battlefields around Stanley. Here’s another photo from that day, with Patrick’s 4×4 parked right in the middle of the former battlefield of Mt Longdon! 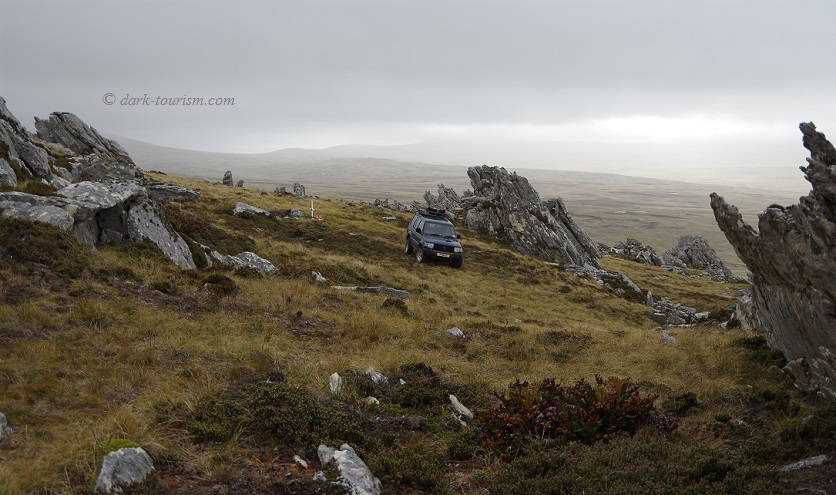 But back to the story of the surrender: in the last few days of the war there were fierce battles with heavy Argentine losses and with British troops advancing on the capital of the islands, Stanley (to the British, but temporarily renamed Puerto Argentino by the Argentines). And so it soon became clear that further defensive action was pointless. Thus General Menendez, the commander of the Argentine forces in the Falklands (or ‘Malvinas’ to the Argentines), phoned his superior General Galtieri on the mainland and agreed to take responsibility for a surrender.

The instrument of surrender was signed in Stanley’s Secretariat building by Menendez and his British counterpart Major-General Moore, who had to be specially flown in by helicopter from Fitzroy. Because of the delay of Moore’s arrival, due to heavy weather, the exact time of the surrender was put slightly forward to 8:59 p.m. local time – i.e. 23:59h GMT. This was to avoid confusion later over the date of the surrender (as happened with WWII … see here!). The actual time when the signatures were put on the document (about half an hour later) would have meant that it had already been 15 June back in Britain, so Menendez agreed to move the time slightly forward.

The surrender was also not unconditional (this word had actually been in the document draft, by default perhaps, but Moore agreed to have it crossed out). The Argentine soldiers had to give up their weapons, but their officers were allowed to keep their personal weapons and retained command over their units. The Argentinians were then all allowed to return home.

During their brief period as POWs they were treated well by the British (some say the conscript soldiers were probably treated better as POWs than they had been by their commanders during the war). Back at home it was a different story; the returnees were shamed. To this day, Argentine veterans keep fighting for recognition.

In Britain, on the other hand, the victory sparked joyous patriotic celebrations (and ensured a landslide re-election for Margaret Thatcher). Yet, here too, many of the veterans remained damaged, mostly psychologically, some also physically, and a few of them went on to campaign for a more realistic portrayal of what war is really like, beyond all the glorification of ‘valour’ and ‘bravery’. Things are rarely as simple as black and white, so even this war, victorious for Britain, a “shameful” defeat for Argentina, remains controversial and a complex subject matter.

Yet you have to understand that the Falklanders are still grateful to the British military for having liberated them. Hence it’s no wonder they have a grand Liberation Monument just outside the building where the surrender had taken place, and the street leading up there is named “Thatcher Drive”. 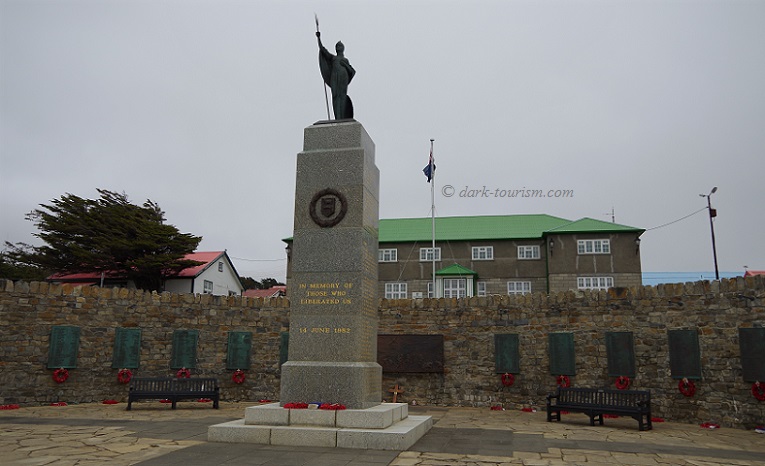 Travelling to the actual locations of this war, and in this context learning so much about it that I hadn’t known before, was one of the most outstanding, educational, moving and most memorable highlights of all my dark-tourism explorations. Incidentally, I summed up the chronology of the Falklands War here, and also compiled a separate chapter that summarizes the underlying sovereignty dispute with Argentina.

Moreover, I met some wonderfully friendly people amongst the locals … there is something about British islanders – they’re often so extremely nice (I had a similar experience on Montserrat and St Helena). And the scenery of the Falklands, despite its barrenness, also made a deep impression on me … as did the wildlife watching.

And speaking of wildlife … this is also not all just idyllic and peaceful, but can also have its dark elements, as I found out at a gentoo penguin rookery on the small Sea Lion Island to the south of the main islands West and East Falkland.

Life in a penguin rookery is anything but cosy. It is extremely stressful. Not only is there a lot of “social tension” amongst their own … and the strains of parenting in such a socially charged set-up are frequently very obvious too. 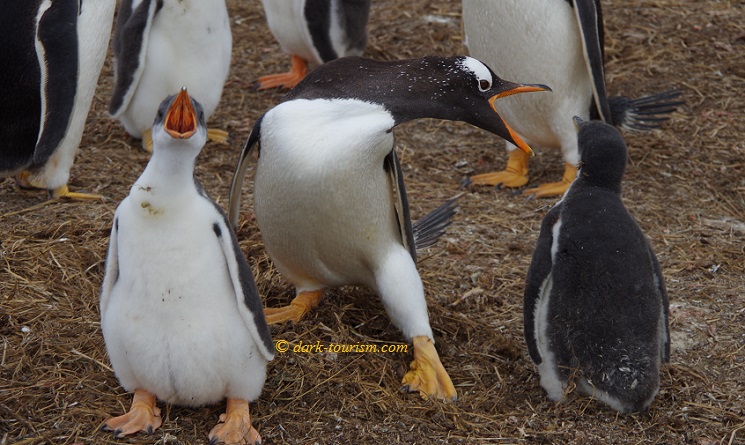 But the penguins are also under almost constant aerial attack from skuas (a big brown seabird of prey), so the adults have to be alert at all times and defend their chicks against such attacks collectively. It’s obviously the young chicks the skuas are after – the adult penguins are too big for them. 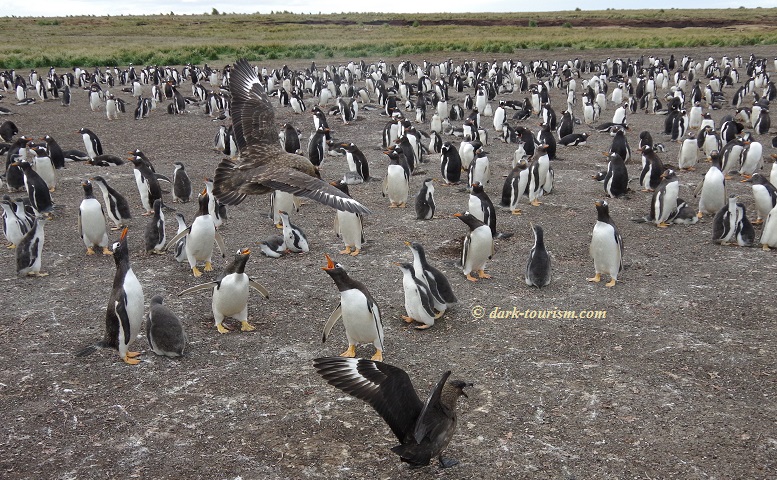 Skuas are quick to seize their chance the minute the penguins let their guard down or a chick strays too far from the colony. Once away from the collective, a lone chick is doomed. A single parent penguin also has practically no chance in fending off skuas, who often work in teams of twos or threes. I witnessed such a scene, and I have to confess that despite the rule that you should not intervene in such a natural setting, I did. 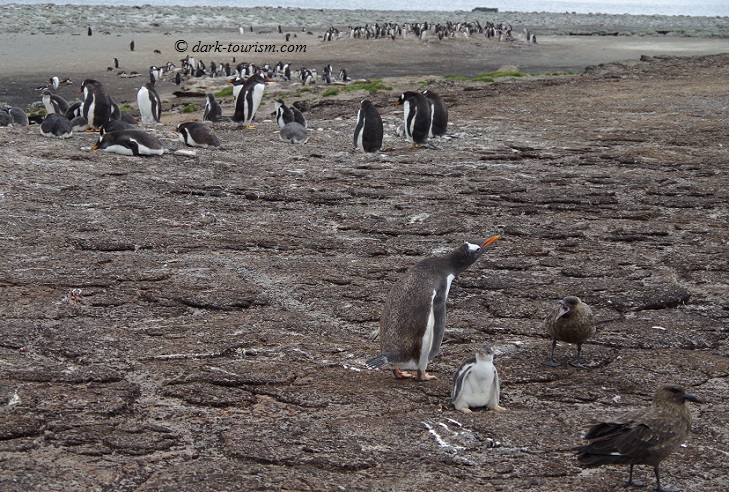 When I saw a lone mother and chick just eight yards from the safety of the rookery under co-ordinated attack by a pair of skuas, and one of them already dragged the chick almost up into the air, I instinctively ran up to chase the skua away. With success, if only temporarily. The skua dropped the shell-shocked chick and flew off to a vantage point some ten yards away, where it took up its observation position again. I then waited until the chick was reunited with its mother before moving on. 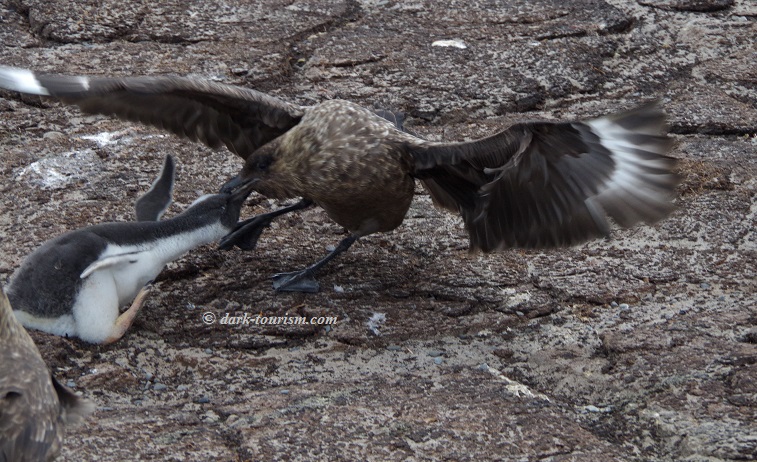 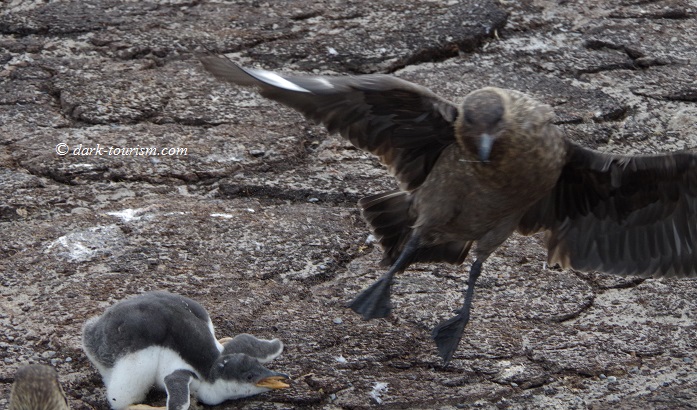 But I guess in the long run the little one was probably doomed anyway. On closer inspection of the pictures that I had taken I later saw that the chick didn’t look too fit and healthy, and the mother (or father?) didn’t appear too determined to fight for it either. So I guess natural selection just had to take its course. But I just didn’t want it to be on my watch! Call me sentimental, but I didn’t think, I just acted instinctively. 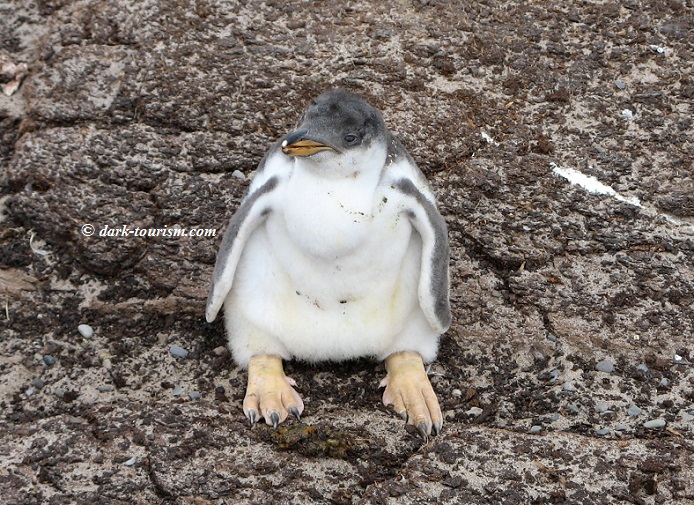 Anyway, it goes to show that dark tourism is not necessarily only about human tragedy, as in war, murder and disasters. Nature itself provides much darkness too.

[Note: this post re-uses some text originally published in two separate posts on Facebook in 2016 (now all gone), as well as two photos used there before, but the rest is all new.]