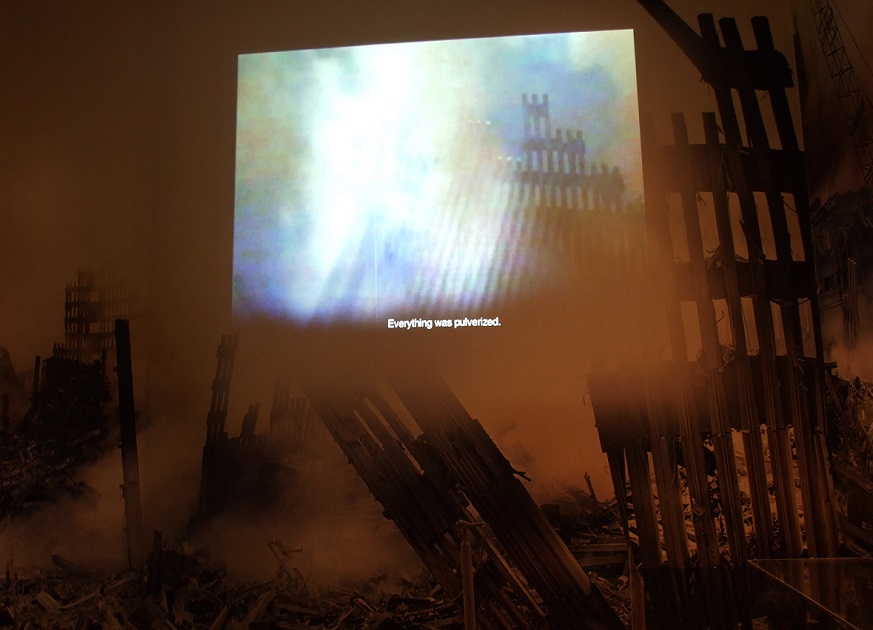 A Dark Anniversary and a bit of Time Travel

On this Day it’s the 19th anniversary of 9/11 – i.e. the terrorist attacks in the USA by means of hijacked planes, two hitting the Twin Towers of the WTC in New York, one the Pentagon near Washington D.C. …

The photo above was taken at the former “Tribute WTC” visitor centre in New York (now relocated, reworked and renamed “9/11Tribute Center”) and shows a projection in the exhibition part of the old centre, involving iconic images of those spiky steel facade elements that remained upright after the collapse of the towers.

This date was also always marked on my DT page on Facebook, but since my complete purge from that platform earlier this year I can only continue that tradition on this blog instead.

As I’m still very busy with my book, I’m making my life easier today by re-posting below all those 9/11 anniversary posts that I had put on the Facebook DT page (now taken from my archives), in chronological order, i.e. starting with 2015 … so it’s also a little bit of nostalgia …

On this Day: 14 years ago, on September 11, 2001 … do I even have to carry on? The events of 9/11 changed the world … in many ways. And that includes perception. Note the plane in the background – we’ll never perceive planes heading roughly in the direction of big buildings in the same way we did before 9/11. The images of those airliners piercing the Twin Towers in New York are forever engrained in public perception. But while the main focus on this day will, as usual, be on New York and “Ground Zero”, I thought I’d give you a photo of the other main memorial site instead, namely at the Pentagon near Washington D.C. (or Arlington, Virginia, to be precise). The memorial is composed of steel structures symbolizing seats – some pointing towards the Pentagon, some away from it, to represent the two groups of victims, those in the building and those on the plane. Each come with their own tiny reflecting pool. Compared to the National 9/11 Memorial site in New York, this 9/11 Pentagon memorial is rather subtle, despite its area size. It is still dwarfed by the massive hulk of the adjacent Pentagon building (view that as symbolic too, if you wish).

On this Day: 15 years ago (has it already been that long?!?) this particular date, the 11th of September, or “nine-eleven” in American English, became one of the most momentous dates in modern history, when hijacked planes were flown into the Twin Towers of the World Trade Center (WTC) in New York in the biggest ever terrorist attacks on American soil. Both towers collapsed and nearly 3000 people were killed.

This photo shows part of the memorial at the “Ground Zero” site of the former WTC that has been constructed around the “footprints” of the destroyed Twin Towers – this one is that of the North Tower.

Today, the adjacent National 9/11 Museum (which is one of the most outstanding memorial museums I’ve ever seen!) will be closed, while special commemorative events mark this anniversary date at the open-air memorial. First there will be a private ceremony for families of the victims, then from 3 pm the memorial will reopen for the general public to pay their respects. Later in the evening the “Tribute in Light” art installation will once again illuminate the New York sky with two shafts of light representing the lost Twin Towers until midnight. The museum will reopen as normal tomorrow.

On this Day … I guess you know what’s coming … 16 years ago, “9/11” happened. It changed the world, also for dark tourism. So the date has to be marked here.

The National 9/11 Memorial & Museum in New York is one of the most popular dark-tourism destinations worldwide (ca. 5 million visitors in its first year alone). There are various other sites related to 9/11 not only in the USA but pieces of the WTC, for instance, ended up in museums all over the world.

Most of these are mangled steel girders left behind after the collapse of the Twin Towers. But the item in today’s photo is different and unique: the twisted antenna mast that used to stand at the top of the North Tower. It too is now a museum piece – namely in the “Newseum” in Washington D.C.

The Newseum is, as the name is supposed to suggest, a museum about the news, or rather: about news reporting, the media in general, its history, development and risks. It’s excellent – and the 9/11 section especially so.

The mangled antenna is the centrepiece, but note also the background: there are hundreds of international newspapers’ front pages published immediately after the attacks. It’s extremely interesting to see the different approaches – especially those that did not succumb to the most obvious (the fireball after the South Tower was hit, which a majority of papers picked, by default, it seems).

I remember the front page of the German news magazine “Der Spiegel” standing out in particular. Instead of choosing a photo showing the devastation, the debris, ash-covered victims or so, it used a frame from the video footage of the second plane hitting the South Tower, namely the one just before it disappeared into the tower, i.e. the split-second before its impact changed the world (since it was only after the second plane had hit that it became absolutely obvious that this was an attack, not some big tragic accident).

On this Day it’s 9/11. But this post is not about that 9/11 of the year 2001 in the USA. Instead it’s about another 9/11, an earlier one, and one in which the USA was not the victim but rather played its part on the side of the perpetrators.

This is a statue of Salvador Allende, the democratically elected socialist president of Chile, who on 11 September 1973 lost his life in the bloody coup staged by the Chilean military under general Augusto Pinochet (and with a good dose of assistance by the CIA!).

Whether he was assassinated or forced into suicide during the aerial attacks and subsequent storming of the presidential palace that day has long been a matter of debate – though after an exhumation and forensic examination it was officially concluded in 2012 that he must indeed have shot himself.

The statue seen in today’s photo stands right in front of the presidential palace La Moneda in Chile’s capital city of Santiago de Chile. In addition to Allende’s full name and his birth and death years it features a quote from Allende’s “farewell speech”, which was transmitted on radio directly from the palace during the coup, with gunshots and explosions audible in the background. In that speech, Allende already spoke of himself in the past tense but encouraged his people to keep up the fight for a better society. It took a long time, but Allende’s prediction, also made in that speech, that those dark days of military dictatorship wouldn’t last forever was ultimately borne out.

Today’s photo was taken at “Ground Zero” back in August 2002, i.e. less than one year after the event, when the place was still very visibly scarred from the disaster. The former WTC site itself was already a big hole in the ground and a construction site. Some neighbouring buildings, however, were still left in their damaged state, as the ones seen in this picture, whose façades were still covered in tarps and netting. I found the flag waving against this background quite iconic at the time.

Today, of course, the damage has either been repaired or the destroyed buildings have been replaced … No damage is visible any more. And at the site of the WTC’s footprint is now one of the most-visited memorials in the world, the National 9/11 Memorial & Museum, also the most expensive such complex ever constructed.