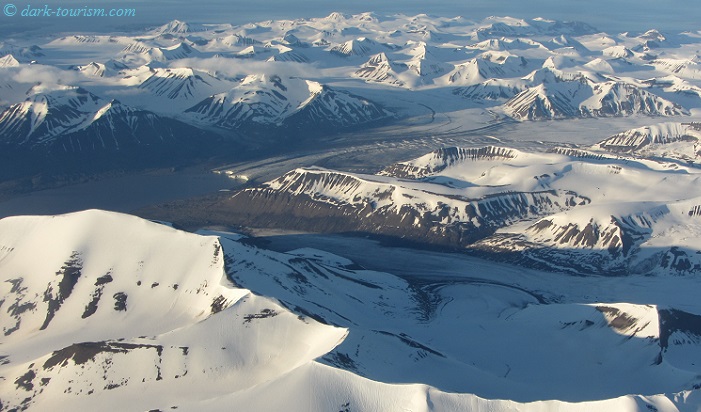 A Virtual Escape into the High Arctic

In the northern hemisphere we’re at the height of the summer right now, and many of us have to deal with hot temperatures and sometimes humid conditions. So I decided to provide some respite by directing today’s “virtual travel” exercise, which I think these blog posts can be seen as, far north, beyond the Arctic Circle: to Svalbard. So you can cool off a bit, in travel dreams …

I’ve only ever been north of the Arctic Circle once, namely on my summer 2012 trip to Norway, including a few days on Spitsbergen, and Murmansk in the northwesternmost part of Russia.

The Svalbard archipelago, with the main island Spitsbergen, is located roughly halfway between the northern end of Norway and the North Pole. It is in fact the northernmost spot on Earth that you can travel to in comfort as a tourist. Tourism is still relatively new to the territory, though. The place was opened up for tourist visitors only in the 1990s after the end of the Cold War (when a proper airport was also built near the main town Longyearbyen).

Svalbard had nominally been placed under Norwegian rule through the Svalbard Treaty of 1920, but with a few exceptional conditions. It had to remain demilitarized and an economic free zone. Thus Norway had a highly unusual arrangement with the Soviet Union, which was allowed to maintain coal mining operations in the archipelago. During the Cold War that meant that the leading nation of the Warsaw Pact was able to exploit coal reserves in a land that nominally was enemy territory, namely that of NATO member Norway. This peaceful coexistence in the interests of the extraction industry partly continued after the end of the Cold War, and one Soviet, now Russian-administered, coal-mining town is still in operation, namely Barentsburg, though at a scaled-down level.

The most fabled Soviet ghost town on Spitsbergen, however, is Pyramiden. The coal-mining settlement was a “model” Soviet community, with workers enjoying much higher wages than in their homeland, and much better infrastructure too. The services provided were intended to showcase Soviet socialism in its best light, and included sports facilities, a cultural centre, a workers’ canteen, bars, schools and what not. But after the Cold War, the extra privilege and support soon began to crumble. It also didn’t help that many of the coal reserves were close to being exhausted. And so the company running Pyramiden, “Arktikugol” (meaning simply ‘Arctic coal’) closed the place in 1998. Thus abandoned it became a ghost town, preserved by Arctic temperatures.

This ghost-town-ness and the opportunity for a kind of time-travel trip back to the USSR then began to attract tourists, and so the Russians kept holding on to Pyramiden and a skeleton staff looks after the place. These days there’s even a hotel with a restaurant/bar again, so visitors can even stay overnight. Most, however, come on day tours by boat from Longyearbyen during the summer season.

Summer in the high Arctic means it never gets dark. In fact the lead photo above (repeated below) was taken just before midnight. The shadows get longer at night time, but the sun never leaves the sky. That in itself is quite an experience (and can throw sleep patterns off balance!).

So, in what way other than such extreme remoteness and middle-of-nowhere-ness, can Svalbard be regarded as a dark-tourism destination? Well, the splendid ex-Soviet ghost town of Pyramiden (named, by the way, after the pyramid-shaped mountain it is located at) is an obvious choice, though it’s not the only point of interest, there are others too.

But first a bit more about Pyramiden – and more photos. In the summer boats arrive at the town’s small harbour next to a giant former coal-loading pier.

From here you are escorted by a Russian (but English-speaking) guide and a couple of guards armed with bear-grade rifles. This is not just for show. Polar bears are indeed the greatest threat to humans in these territories. Just a year before I went there, a group of Brits on a camping trip in Svalbard were attacked by a polar bear who killed one of them before they managed to shoot the bear. In fact carrying a rifle and being able to use it is a prerequisite for being allowed to travel independently anywhere in the archipelago outside the capital Longyearbyen (that’s too busy with humans for the bears to venture there). In the case of the killed Brit the campers were partly to blame themselves. Apparently they hadn’t set up the alarm trap wires properly. So their negligence cost two lives, that of their travel companion, and that of the bear. Given how endangered these great creatures are that is just as tragic at least.

But back to Pyramiden: a top highlight of the walking tour of the ghost town is the former cultural centre and sports complex, named after Soviet space-age hero Yuri Gagarin. Outside stands a large plinth crowned by a Lenin head.

Inside the abandoned centre plenty of Soviet-era relics can still be seen – photos from its heyday, old newspapers, broken furniture, dried-up pot plants, and old propaganda posters, one of them a bilingual celebration of the Norwegian-Soviet agreement in Spitsbergen.

The concert hall in the cultural centre still has a grand piano on stage – now the northernmost specimen of its category and as abandoned as the rest of the place! However, I remember once watching a documentary about Spitsbergen and Pyramiden, and two of the protagonists tuned the piano and played it! A most surreal scene indeed …

Another highlight of the tour of Pyramiden is the former workers’ canteen and its kitchen. Again plenty of Soviet relics and decorative artwork can be found here.

At the opposite end of the square that the cultural centre’s Lenin overlooks is a sign in front of an abandoned residential building (its windows now inhabited by nesting seagulls) showing yet another polar bear, a mining symbol, the figure for the latitude (79 degrees north) and the inscription in Cyrillic saying “Arktikugol – Spitsbergen”. In the background is the glorious expanse of the Nordenskiöldbreen glacier.

The actual coal-mining operations at Pyramiden were unusual in that they took place not deep underground below the town, but high up inside the neighbouring mountain that gave the town its name. It would be interesting to go up there and explore more, but that was not possible with the guided-tour set-up.

A visit to Pyramiden ends with popping into the hotel bar – where many visitors take advantage of the tax-free and subsidised prices, so you can have a shot of vodka (in style) or whatever else (not so in style) at a cost you could but dream of in mainland Norway. They have a small, old-school museum next to the bar as well. The whole atmosphere is thoroughly Russian!

If you want to experience more of this, you can also go on tours by boat (in the summer, by snowmobile in winter) to visit another Spitsbergen coal-mining town from the Soviet days, Barentsburg. This is not a complete ghost town, but remains partly in operation, and although the population has shrunk to under 500 it is still the second-largest settlement on Spitsbergen after Longyearbyen. Here you’ll get a guide from “Arktikugol” and can explore parts of the town. Again, the place feels totally Russian, vehicles have Russian number plates, a Mil-Mi-8 helicopter flew overhead, and there’s still lots of Soviet-era signs and propaganda. Like at Pyramiden, a big Lenin head still overlooks the town centre, and a monument behind it proclaims in Russian “Communism is our goal”; this is obviously no longer so, but I guess it’s just that nobody ever bothered to take the sign down.

Not all billboards are propagandistic. One I spotted was basically just a large painting of a birch forest – probably to remind homesick Russian workers of their homelands here on treeless Svalbard.

As in Pyramiden, you can end your visit in the town’s very Russian bar for a cheap drink. They also have a museum, but that appeared to be closed when I was there. Shortly after my visit, in 2012, a new bar and restaurant called “Krasny Medved” (‘Red Bear’) opened in Barentsburg with an adjacent microbrewery! This was briefly the northernmost brewery in the world, apparently, until in 2015 another one opened in Longyearbyen a few dozen miles further north still. As in Pyramiden, you could, if you want, also stay overnight in Barentsburg, and you’d even have the choice between a hotel and a cheaper hostel!

En route between Barentsburg and Longyearbyen the boat passes yet another former coal-mining town; this is Grumant, abandoned as early as 1965 and a complete ghost town, or rather a small assortment of dilapidated buildings. It oozes an extreme air of isolation and remoteness.

It’s not only the Russians who have been mining here, there are Norwegian mines too, though the scale of mining has much declined. Yet you can see many remnants of mining around Longyearbyen too. And miners are clearly still revered, as exemplified by a few monuments in town, such as this:

To my surprise I found that it’s not just in post-Soviet enclaves on the island that you can encounter Lenin. No, the “Kroa” bar/restaurant in the middle of Longyearbyen also had one behind the bar, reflected threefold to thus even outnumber the Soviet equivalents in the territory of Svalbard!

In the same place I saw that hanging on the wall behind some tables in one corner was a rather gruesome painting of a polar bear – shot dead and bleeding from the mouth. I doubt you’d get many places where such an image would be deemed suitable as decoration in a restaurant.

Apart from such surprise dark details, Soviet mining ghost towns and dangerous polar bears, Svalbard is just a phenomenally scenic place – provided you like it Arctic. Ideally I’d go more often to such places, but it’s hard to convince my wife to pick such a place over somewhere warmer and greener 😉

In addition to the sheer beauty of the glaciers, icebergs, mountains and their reflections in the fjords, the place is also good for wildlife watching. I didn’t personally see any (live) polar bears, reindeer, nor any whales on the two boat tours, but plenty of seals, such as the incredibly large bearded seal, and of course countless seabirds, including the endearing puffins.

To finish this rather long blog post today, I give you yet another photo taken from the plane as it flew in at around midnight descending to lower altitudes on its approach to Longyearbyen. That way you got magnificent views over the totally uninhabited parts of this Arctic wonderland. One of my favourites is this picture of merging glaciers!

And here comes the third of the four themes of our most recent poll (which didn’t have a winner, hence all four are fielded). So now for reflections – and I mean that literally, mostly, though a little bit of reflecting in the figurative sense will also feature. But this is primarily a visual blog post.

I like photographing reflections! I’m always on the lookout for reflections wherever I travel. Hence I have loads of such photos that accumulated over the years. So the 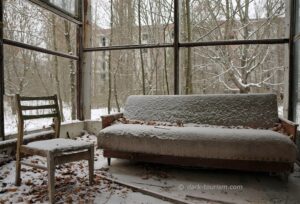 And here comes the second of the themed posts (after last week’s “DT & hands”) that featured in our most recent poll, which didn’t have a clear result. So for this time I’ve picked furniture. 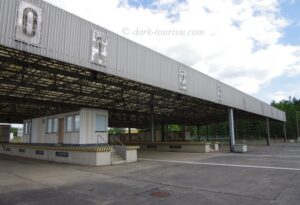 Today is the 31st anniversary of the official reunification of Germany on 3 October 1990. I already marked this last year on the 30th anniversary with a special post that recycled four posts from my purged Facebook DT page taken from my archived version. Today I won’t repeat that. Instead I’ll give you a few photos from different corners of Germany that illustrate the diversity of the country and its dark-tourism portfolio.