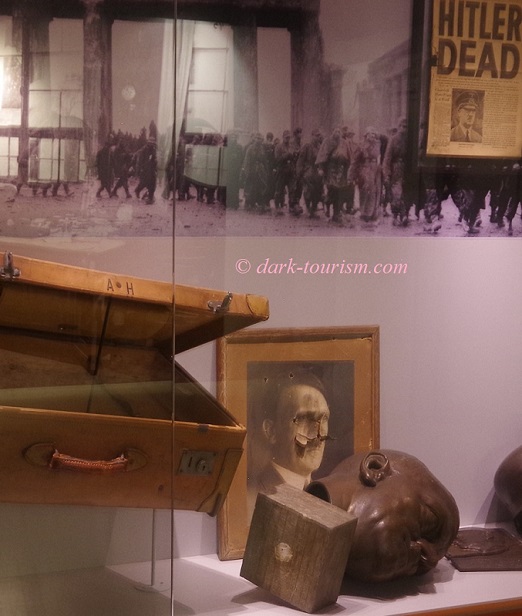 As a suitable first blog post photo I thought I should pick the very one that started the whole Facebook fiasco (for more on that see here). While it may have been against “community standards” there (though I don’t think it really was, but so what), we do not have any such restrictions of freedom here. So consider it for yourself.

What I wrote about it on Facebook on that day (at a time when I was trying to insert little allusions to the coronavirus crisis) was this:

“On this Day, 131 years ago, on 20 April 1889, a certain Adolf Hitler was born in Braunau am Inn in Austria. Fifty-six years later he was in lockdown (!!!) in his shelter, the legendary Führerbunker, in Berlin, as the Soviet Red Army advanced and it had become undeniable that the war was lost and the Third Reich finished (somewhat short of the thousand years it was promised to last). And so, shortly after his final birthday, Hitler committed suicide in the bunker. And just over a week later, Germany surrendered unconditionally to the Allies, thus bringing World War Two to an end in Europe.

Hitler’s death also brought down his image as an icon in many places, even quite literally. People vented their anger at Hitler by toppling busts and destroying images of the dictator.

A couple of examples of this are on display at the large Mémorial de Caen peace museum in Normandy (see link in my comment below) as seen in today’s photo.

The suitcase seen on the left here, which once belonged to Hitler (spot his initials in the centre of the top of the suitcase), was apparently found at the Berghof at Obersalzberg, Hitler’s favourite home away from Berlin during his reign.”

Now I’m asking: what was so offensive about this? Yes, it showed the image of the unmentionable dictator, but in the context of the liberation from his rule, so it’s the exact opposite of promoting Nazism. Yet it still triggered maximum censorship, complete silencing and erasure of everything I’d ever put on that platform (also on my personal account).

What I can’t get my head round is the fact that I had occasionally posted much “riskier” photos (e.g. ones with swastikas visible in them) for years without any such censorship coming my way. So why on this occasion?

Or could it really be that the “offence” was not the mentioning of Hitler and showing images of him, but the fact that the bust and painting are damaged, defaced? So was it actually rather seen as a case of  “Führerbeleidigung” (literally ‘insulting the leader’) and it was this that was my “crime” with this post? “Führerbeleidigung” was indeed a criminal offence in the days of the Third Reich; so is Facebook picking that up again? It’s certainly not doing enough against real neo-Nazis, but when I come along with an image of a defaced Hitler and a story about the liberation of France from Nazism, I get hammered down. Does make you wonder, doesn’t it?

But back to the image. It’s just one part of the generally excellent Mémorial de Caen, the largest and most eminent of the many museums/memorials in Normandy related to D-Day and it also covers its wider context (from the aftermath of WW1 to the end of the Cold War). In fact, I’d say if you are travelling to that part of the world but don’t have time for all those sites, make this memorial museum your priority. They also offer guided tours by minibus to some of the D-Day-related sites and landing beaches, which is a convenient way of seeing these especially if you don’t have your own vehicle.