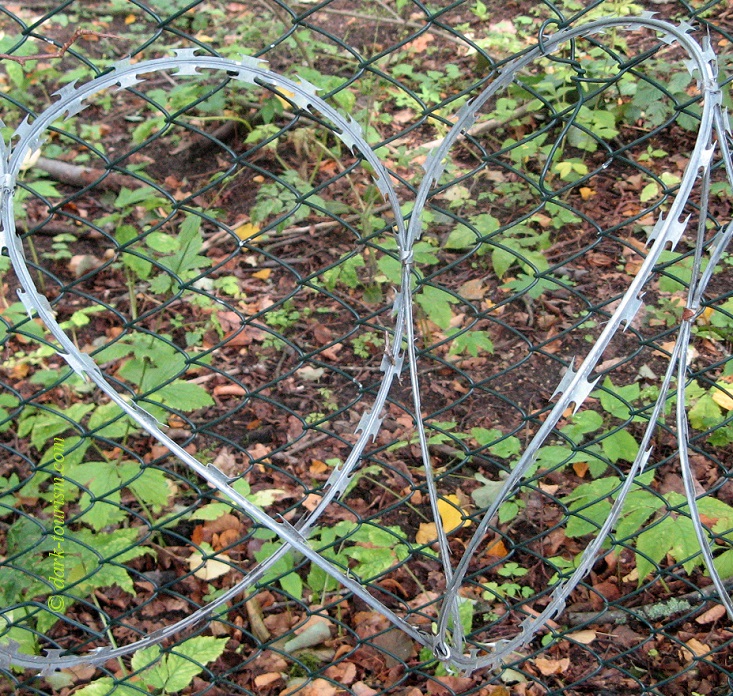 Today is 14 February, Valentine’s Day! Last year I marked this date with a post featuring a photo of a dark bas-relief by Norwegian sculptor Gustav Vigeland plus photos of a few more works by the same artist on public display in Frogner Park in Oslo, Norway.

For today I searched through my archives looking for other things that could be related to Valentine’s Day, like hearts, flowers and other symbols of love – but with a dark-tourism-relevant connection, of course. I didn’t find many hearts. The featured photo above, repeated below, is one of them:

This is a piece of razor wire (the nastier type of barbed wire) forming the shape of a heart – spotted near Wolfschanze in Poland, so at a very dark place indeed. The heart-shape is totally by chance, of course, but I found that quite an evocative juxtaposition: heart-shaped razor wire – the lovely and the nasty rolled into one!

Another bizarre heart I found is this one:

This was part of an installation inside the foyer of the Okinawa Prefectural Peace Memorial Museum in the Ryukyu archipelago. That group of Pacific islands had since the 19th century been annexed and incorporated into the Japanese empire and it’s where towards the end of WWII the last major battle was fought, one of the bloodiest ever, which ended in a US victory, but at a high cost in casualties. That battle and its aftermath is what the museum is mainly about. But what the installation involving this heart, which seems to be dangling from a gallows, is supposed to signify, I haven’t been able to really work out.

As for flowers, of course I could have selected photos of flowers or wreaths placed at memorials or tombs, but that didn’t seem right for Valentine’s Day. Except perhaps this one:

This to me looked rather romantic indeed – also because of where the red “flower” (I don’t think it’s a real one) is placed on this angelic-looking sculpture. I spotted this many years ago in one of Europe’s largest cemeteries, namely Ohlsdorf in Hamburg, Germany.

Cemeteries often offer rather romanticizing statuary and sepulchral art, even though the borderlines between love and mourning and allusions to some form of afterlife are generally blurred. Here’s one I saw in Montparnasse cemetery in Paris:

I guess that to most readers this will look familiar. And indeed it’s basically a copy of a famous neoclassical sculpture entitled “Psyche Revived by Cupid’s Kiss” by Italian sculptor Antonio Canova (external link, opens in a new window). Canova made two versions of the original; the first one is now on display in the Louvre in Paris, the second one in the Hermitage in Saint Petersburg, Russia, i.e. in two of the world’s most eminent art museums. The version in Montparnasse cemetery is most likely a later replica.

The theme of a winged angel embracing a female figure is quite frequently encountered in cemeteries in countries like France and Italy. Here’s one from the fabulous Cimitero Monumentale in Milan:

An exceptionally romantic piece of sepulchral art I found in a far less famous cemetery, namely in Ondrejsky in Bratislava, Slovakia:

Finally, let’s leave cemeteries behind and try and find romanticism in socialist-realist art. It seems rather unlikely, but consider this:

This is a detail of the huge mosaic that wraps itself around the “Haus des Lehrers” (‘House of the Teacher’) in East Berlin, Germany, then the capital of the GDR (East Germany). It is one of the largest and most impressive relics of socialist-realist art in Germany, and despite its associations with the repressive regime of the GDR, I do hope that this splendid piece will be preserved.

This detail was probably meant to convey the idea of intercultural relations, but the two figures look like they’re taking it very much to heart, well beyond the mere duties of socialist solidarity. Just look at that embrace … there’s clearly more going on here.

Have a good Valentine’s Day, whoever you may or may not be embracing or kissing or giving flowers to.