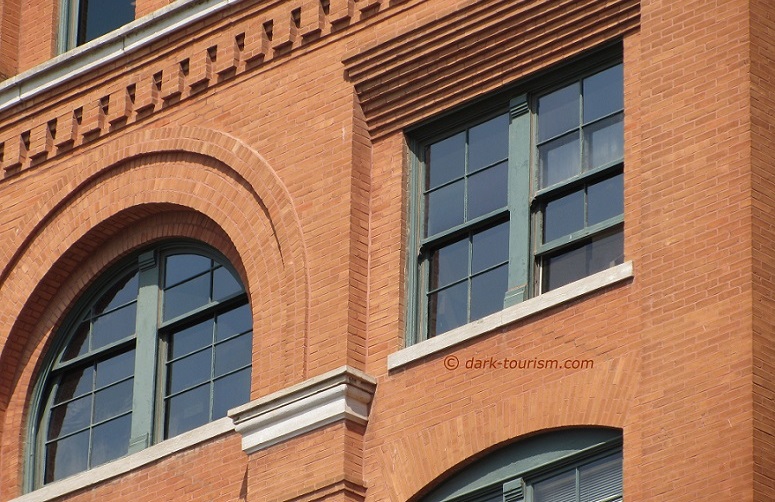 I visited the spot on Dealey Plaza on the western edge of downtown Dallas as part of my USA South-West trip back in 2012, when I took the following photos. This first one shows Dealey Plaza seen from the west, looking north-east:

If you look closely, you can see a little white cross on the tarmac on the right of this frame. There are two more crosses, and they all mark the spots where JFK’s open car was when those three shots were fired. The assassin shot from a sniper’s nest on the sixth floor (fifth in British counting) in what was then a school book depository. Here’s a photo of the renovated building taken in 2012:

The building houses a museum about the assassination on that very floor, from which it also takes its name: the Sixth Floor Museum. Oswald’s sniper’s nest at the window from where the shots were fired has been recreated as it would have looked back then. Inside the museum no photography is allowed (and that rule is strictly enforced!), so I can’t give you a photo of this sniper’s nest. The best I can offer is this zoomed-in shot of the window as seen from the outside:

The museum details in minutiae the events leading up to the assassination from various perspectives, including Oswald’s, as well as the aftermath, the investigations and conclusion. The various conspiracy theories about the assassination get a mention too, but the museum treads the official line. Outside on the grounds around the building and the street it’s on (Elm Street), numerous “freelance” guides and brochure sellers continue peddling whatever their favourite conspiracy theory is. It’s a strange atmosphere. On the one hand you can’t but notice that the narrative is contested, on the other it is quite touristy. Some people even try to have their picture taken (or attempt a selfie, these days) standing on one of those crosses in the street – which is a bit risky, because it is still a busy road. But I haven’t yet heard of any selfie-takers getting run over on these already tragic spots …

Finally, it’s time to bring back the “tradition” of having theme polls on this blog, i.e. I give you four options and you choose one. In the latest such poll, the theme “dark tourism and clothing” was the winner, with two others narrowly behind, so I’ll field those again to give them both another chance; the other two are new suggestions:

Please vote by leaving a comment below stating your choice (or, if you’re a subscriber to the Newsletter, you can also vote by replying to the newsletter mail that will go out later today).