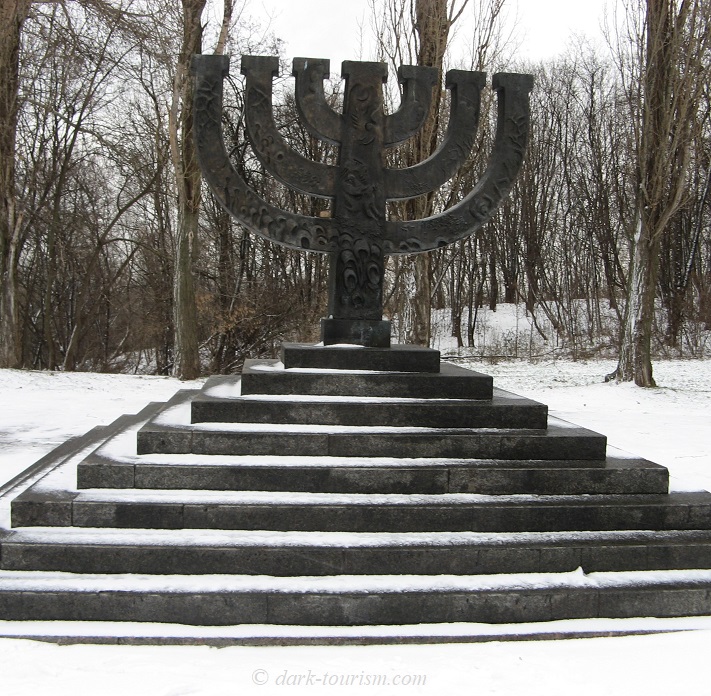 As the brutal war that Putin’s Russia has launched against Ukraine continues, there has been another clash with the world of dark tourism too.

On Tuesday there was a missile strike on the Kyiv TV Tower, once the world’s tallest steel lattice structure, seen intact in this photo from 2006:

The link to dark tourism is this: the TV Tower is directly adjacent to a very dark site of the Holocaust, Babi Yar, or Babyn Yar in Ukrainian spelling, a massacre site and mass grave. During the last two days of September 1941, the Nazis assembled and machine-gunned to death a large number of Jews from Kyiv in a ravine at this site, which was then filled in to become a mass grave. Afterwards the perpetrators proudly reported the astonishingly precise number of 33,771 victims. An unimaginable mass murder. More executions took place at the same site until 1944 to bring the total death toll to somewhere between 70,000 and well over 100,000.

In Soviet times this significant site was hardly commemorated; a nearby typically grand monument failed to acknowledge that by far the majority of victims were Jews and instead referred to them as “Soviet citizens” who were “victims of Nazism”. This is located not exactly at the original massacre site but in a separate small park a bit further away.

Only after Ukrainian independence following the dissolution of the USSR, did further commemoration take place. This is the central Menorah Monument near the Babyn Yar ravine (same photo as the featured one at the top of this post):

Another newer memorial is the Children’s Monument, dedicated specifically to the many child victims of the 1941 massacre. The endearing structure is to be found on the edge of the park that Babyn Yar is in, close to the Dorohozhychi metro station (which currently serves as a bomb shelter):

In 2001 a cornerstone for a Jewish Heritage Community Center was laid at the site too, on the 60th anniversary of the second day of the initial massacres, now marked by an additional memorial stone, pictured below:

Last year, President Zelenskiy (who is Jewish himself) unveiled another larger monument at the site, a “Mirror Field” (metal columns and plates with symbolic bullet holes in them); and there two more newer elements: a “Crystal Crying Wall” and a symbolic wooden synagogue – but for all those I have no photos. I had also heard of plans to finally add a proper modern Memorial Center, with a museum, as I understood it. But I presume this is all on hold now too.

Whether anything of the memorial site at Babyn Yar was actually damaged in Tuesday’s rocket attack, and if so to what degree, remains unclear. Some reports claim there was damage (e.g. this one), some are more cautious (e.g. this one – external links; open in new tabs). But the outrage especially in the global Jewish community was great, understandably.

Babyn Yar is a sacred site, one of the most significant Holocaust memorial in Ukraine. That this was attacked, even if it wasn’t deliberately targeted and may or may not have suffered “collateral damage”, it’s an evil desecration.

Yet, compared to what the civilian population of Ukraine currently has to endure, this is of course infinitely less serious. It’s heartbreaking to read the news and see the images and footage. I’m really quite thrown off balance by it all. Hence I will leave it at this rather shorter post.