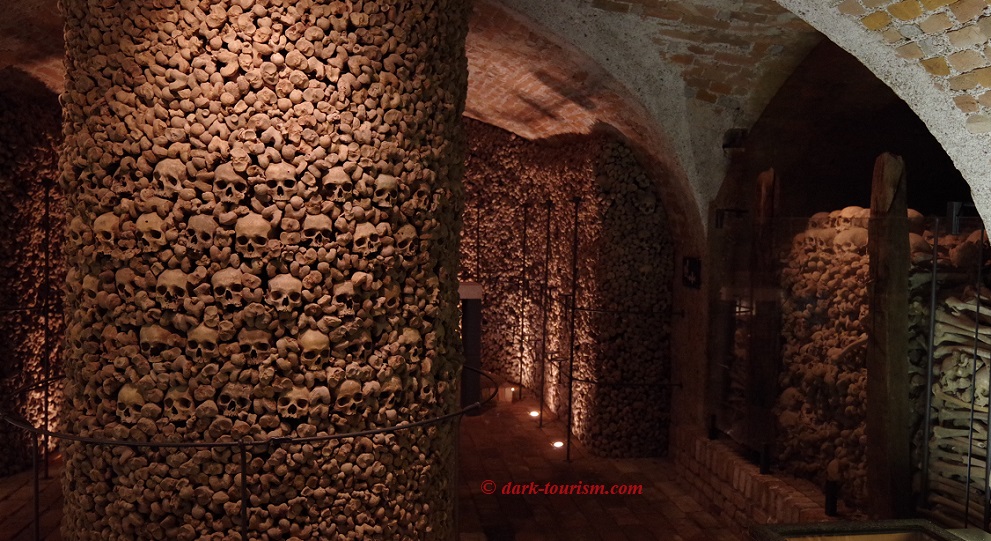 This week I resumed a little bit of travelling, for the first time since January in fact, namely by going to Brno in the Czech Republic, which is only a 90-minute train ride away from where I live (Vienna). Brno (Brünn in German) had long been on my to-do list but had been too easy to postpone given its proximity. Now, with all those pandemic-induced restrictions it had become a more immediate option to test the waters of travelling during these COVID times. So I travelled with my wife by train on Tuesday and came back the same way on Thursday.

I managed to tick off all four significant dark-tourism attractions of Brno during that time: the ossuary underneath sv. Jakuba (St James) church (featured in the lead photo above), the famous Capuchin Crypt with its semi-mummified dead monks on display, the old prison tracts inside the casemates of Špilberk Castle, and the Cold-War-era fallout bunker 10-Z inside the foot of the hill that the castle sits atop of. Here are a few more preliminary images:

This week’s biggest news item (other than the coronavirus pandemic for once) was of course that horrendous blast in Beirut, Lebanon. While in Brno I watched the first footage of the explosion on the Internet, and I have to say that I haven’t been able to get those images of that enormous shock wave out of my head since. Back home I did some more reading up on the disaster. Apparently the 2,750 tonnes of ammonium nitrate that caused the blast had the explosive power of between 0.7 and 1.8 kt TNT (depending on which source you consult), i.e. between ca. 5 and 13 per cent of the power of the Hiroshima bomb (only in terms of kinetic energy, of course, Hiroshima was naturally far worse in terms of the additional heat and radiation it unleashed). This makes the Beirut blast of 4 August one of the ten biggest non-nuclear artificial explosions in history! (Ammonium nitrate has been involved in three other entries in this grim league table, and five others also happened in harbours.)

The images of the destruction caused are shocking as are the hardships created by the disaster for this small country already pummelled by multiple crises … not just the pandemic, but also the Syrian war next door with the masses of refugees that have fled to Lebanon, and all that on top of a financial crisis and rampant corruption and mismanagement – of which the totally preventable tragedy this week was only the worst manifestation, as has meanwhile emerged. Apparently there had been warnings that this could happen for years, but the authorities did nothing. This will surely have serious political repercussions too.

Personally, I’ve followed the call for donations to help the stricken city. I felt I ought to. I have found myself strangely captivated by this disaster more than any other since the 2011 Japan tsunami (or the Indian Ocean one before that in 2004). It’s absolutely haunting me. Please consider donating too.

Finally, let’s also not forget that today is the 75th anniversary of another disastrous blast: the atomic bombing of Nagasaki on 9 August 1945, the second and so far last such nuclear bombing, three days after Hiroshima. In the West, and especially in the USA, the bombings have long routinely been justified as a necessary evil in order to end WWII swiftly and thus ultimately save lives. But there were other voices too at the time. Yet this moral justification narrative became the established one, so much so that even any indication of challenging it would be seen as “unpatriotic” in the US, as the controversy over the 50th anniversary presentation of the topic by the Smithsonian Institute demonstrated.

However, the international historian community has increasingly moved away from that older narrative in recent years. Instead the currently more accepted interpretation is that Japan surrendered not so much because of the atomic bombs (although the Tenno pushed that argument in his surrender speech – perhaps as part of a face-saving effort or just to play along with what the Americans wanted), but more so due to the fact that the Soviets had declared war on Japan too and begun an invasion of Japanese-occupied Manchuria. And the country had been on the brink of defeat anyway. Even within the US military’s highest ranks at the time of the atomic bombings they were seen as militarily unnecessary and cruel, as ultimately a war crime. Here’s an intriguing article, released today about all these issues that is well worth reading. The historical photo below was taken from that article. Although in black and white it bears an unsettling similarity to some of those blast images from Beirut, doesn’t it?

Please note that I’ll be away travelling again (this time to Italy) all next week and probably won’t be online much (if at all) during that time, but I’ll be back and regularly contactable again from the 15th.

[Subscribers to this blog’s newsletter – see above, if you haven’t signed up yet! – will recognize most of this post’s text, and its images, as derived from today’s Newsletter bulletin. For once I followed the often encountered practice of having parallel content in posts and newsletters, but that will change again when either I have more than one post in a week, when there is another poll, or when there is no post at all – which will soon become a realistic possibility, because I’ll receive the proofs for my book at the end of this month and then work on that will have to be my top priority again and I can’t guarantee I’ll find the time for regular blog posts for a while. Fingers crossed, though.]