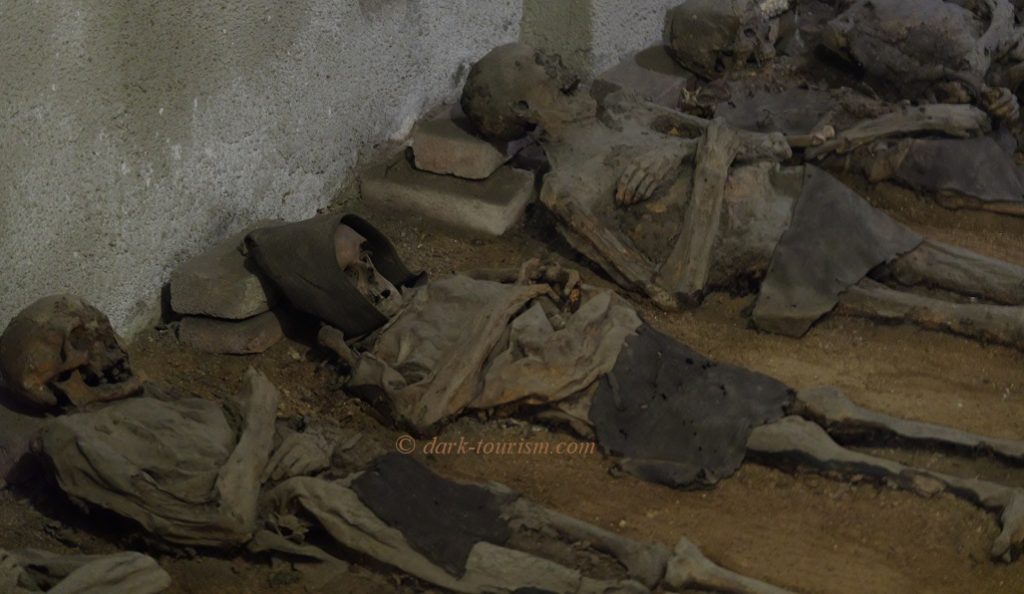 This post’s theme was not decided by a poll this time but just by myself. For one thing it allowed me to reconnect to the first of my little trips I made this summer, namely to Brno, Czech Republic. The photo above was taken in one of the prime dark sites in that intriguing city and shows some of the fabled mummies to be seen in Brno’s Capuchin Crypt. They’re only semi-mummified (naturally, through the crypt’s micro-climate, it is said); you also see some bare bone. I found the hooded mummy in the centre one of the scariest-looking specimens here.

I was a little surprised to witness quite a number of families with small children visiting the crypt. I wouldn’t have thought that such a “spooky horror” attraction was something for children, but clearly it did not actually noticeably scare any of the kids. Never underestimate the dark-tourism potential in children, is something I took home with me from this visit …

The other reason why I picked the mummies theme is that it, again, allows me to dig into my archive so I can make do without having to write too lengthy new text for this blog post. I lack the time for that right now as I am still knee-deep in editing work for my book, and that has to take priority. (Also don’t look for Brno chapters on my website – I haven’t found the time to compose and upload those either, and for the same reason.)

So here are a few more mummy photos posted before (on my purged Facebook page, now to be found in the reconstructed archive pages that I turned my saved material into).

First here are two more mummies in a church crypt, this time that of St Michan’s in Dublin, Ireland:

Yet we typically associate mummies rather with ancient Egypt as well as Latin America. I don’t have any photos of Egyptian mummies, but I visited some in a cave near Uyuni, Bolivia. Here’s an intriguing one:

Getting nearer and taking a closer look revealed that the mommy mummy also had a coin placed in one of her eye sockets … and some coca leaves sprinkled over her dreadlocks!

In fact it is quite common that the mummies in Bolivia (and elsewhere in the Andes) are given “gifts”. This tradition of leaving grave goods also explains the can of beer seen in the previous photo … and the coca leaves next to it. (This is Bolivia, after all, where coca leaves are a common and legal recreational ‘drug’ that’s good for endurance and helping with the altitude; but they wouldn’t make a good souvenir to be discovered at customs checks back home).

So the can of beer wasn’t (as some may have suspected) trash left behind by disrespectful visitors. Actually these mummies don’t get many visitors – other than locals, who would not do such blasphemous things anyway. But the place is not a tourist attraction. It’s normally kept secret (and this is why I can’t disclose the exact location beyond “near Uyuni”).

However, my guide took me there to make up for the fact that we had to change plans. The original plan would have been to drive across the Salar de Uyuni to the foothills of Tunupa volcano to see the much more famous Coquesa mummies (which are on the usual tourist trail). But the Salar was too flooded at the time to allow for a safe drive. My guide reported that the night before two jeeps with tourists who had risked the drive anyway got stuck in the salt slush and had to overnight out there before they could be rescued the next morning. We obviously didn’t want to follow that bad example.

On balance I think the outcome was better in terms of mummies – going by photos I’ve seen online, the Coquesa mummies look less striking than these at the undisclosed location. OK, the drive to the volcano would have been cool, but we were at least able to drive around on the water-covered salt flat for a bit in the vicinity of Colchani, so I did get to see the fabled mirage-like mirror-surface optical effects at Uyuni.

But back to mummies. The same mummy cave in Bolivia also held another surprise:

This is obviously not a human mummy but that of a puma (aka cougar or mountain lion, the largest cat in the Andes). This was hung above the top of the entrance to the cave with the human mummies – inside, so you only see it when you turn around after having entered the cave or when you’re leaving. That’s when I suddenly discovered it – which lent an extra dose of scariness to the visit.

Why the puma mummy has been placed there isn’t entirely clear. My guide ventured something like to protect the entrance in a spiritual way … but I haven’t been able to ascertain that or find anything else out about this particular place.

But it was an unexpected bonus highlight of that trip through the Andean Alto Plano of Bolivia … which was back in 2012.

Next comes a partial mummy, and one much closer to home …

This is a particularly spooky image, I find (and others have told me the same upon seeing it). It is the mummified head of a person who had committed suicide (actually I was told it’s a replica), and is one of the many spooky artefacts on display in the Kriminalmuseum (‘Crime Museum’) in Vienna – where I live (that’s what I meant by “closer to home”).

Suicide is regarded as, perhaps not a crime proper (you can hardly be punished for it either), but as a “sin”, certainly from the point of view of the Catholic world view that has long been prevalent in Austria. (I hasten to add that I do not share that view with regard to suicide: in my opinion it should be everybody’s right to end their own lives if/when they decide they must do so.)

Apparently, though, it is seen as not at all ethically dubious to put the head on public display here, amongst all those artefacts and specimens related to all manner of serious crimes (lots of them capital crimes).

The Crime Museum in Vienna is in fact a very interesting little dark-tourism gem that isn’t so well known, but deserves more attention. But be warned, it’s not for everyone – and this mummified head isn’t the only scary thing to see here. There are plenty of other gory displays, including another mummified head, in this case that of a person executed in the 18th century.

Finally I’ll leave you with a picture of yet another mummy at that Bolivian site (see above), but this time heavily treated digitally, so that the result is quite a beautiful impression vaguely resembling an X-ray image, but in colour: