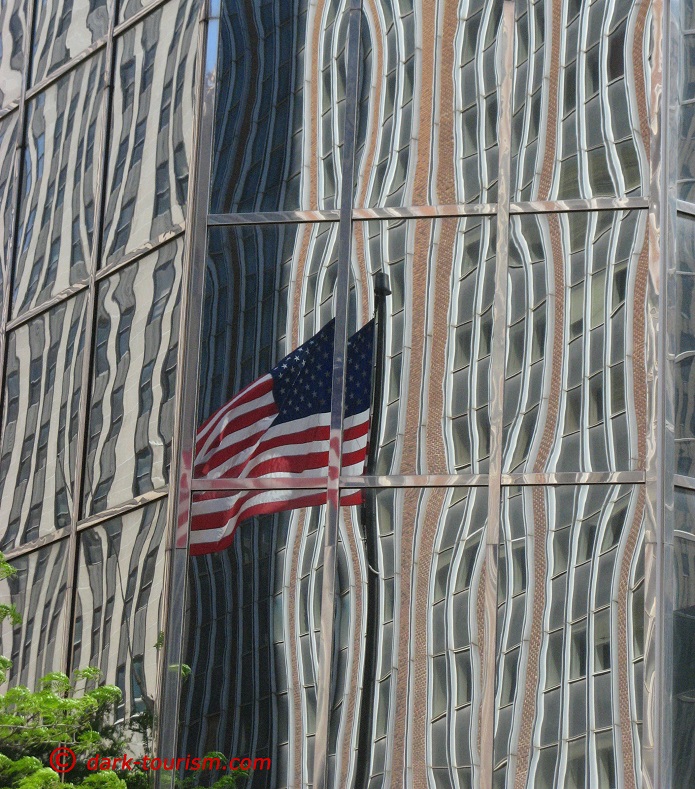 This theme was not decided on by a poll, but just by myself, and the link to today’s significant date should be obvious.

But let’s start at the beginning. So, what kind of stars feature in dark tourism? For one thing there’s the old communist or Soviet five-pointed red star, like these:

These particular specimens used to be attached to the gate of a GDR-era Soviet military garrison at the compound that had been the concentration camp of Ravensbrück during the Third Reich (this kind of reuse of the camps was not limited to Ravensbrück, there was also one of the Soviet ‘special camps’ at e.g. Sachsenhausen) and these stars are now on display at the present camp memorial’s main exhibition.

The Soviet Union may have gone, but Russia partly clings on to the old red star symbol to this day. For instance the Russian Air Force still uses the red star symbol on its planes, and illuminated red stars still crown some of the towers of the Kremlin in Moscow:

Outside Russia, Soviet five-pointed stars can also still be found all over the former Eastern Bloc and ex-USSR, such as at this monument featuring a MiG-21 fighter jet on a plinth seen through the cut-out shape of a Soviet star:

This is in Karkaralinsk, a remote town in the middle of Kazakhstan in the Karaganda region. Also in Kazakhstan, but closer to the capital Nur-Sultan (the former Astana, now renamed in honour of the former First President Nursultan Nazarbayev), is this broken red star, which is part of the ALZHIR gulag memorial complex in Malinovka:

The acronym ALZHIR, by the way, stands for the Russian for “Akmola Labour Camp for the Wives of the Betrayers of the Homeland ”, i.e. it was a Stalin-era forced-labour camp not for the actual persons accused of whatever anti-Soviet “crimes”, but for their spouses. So for that reason alone, by mere association, they were also regarded as criminals, without even having done anything. German has a word for this practice: “Sippenhaft”, literally ‘clan imprisonment’ or ‘clan liability’, but there isn’t really a proper translation for this particular form of collective punishment; this camp was a prime example of the concept, though.

Five-pointed red stars are not confined to the communist realm. You can even find them in what’s almost the total opposite of the Soviet world: Hollywood in Los Angeles, California, USA. The famous “Walk of Fame” on Hollywood Boulevard is a series of five-pointed stars set into the pavement (or ‘sidewalk’ in American English) with the names of famous actors or other popular culture celebrities, such as this one for horror movie actor Vincent Price:

Other star symbols include the Jewish six-pointed Star of David, which also features on the graves for Jewish soldiers at the American war cemetery near Omaha Beach in Normandy, France:

This cemetery is the final resting place for those US soldiers who had fallen during the D-Day invasion of Nazi-occupied France in June 1944.

The topic of D-Day neatly takes us from stars to stripes! In addition to the amphibious landings, aerial bombing raids and the dropping of paratroopers behind enemy lines were also part of the massive operation. And the planes involved on the Allied side had special black-and-white stripes as markings on the wings and fuselage, such as on this aircraft:

This particular refurbished plane from D-Day is on display at the RAF Duxford branch of the Imperial War Museum in Britain.

Stripes also featured quite recently here on this blog, namely as part of the post on the theme “dark tourism & clothing”, which included concentration-camp-inmate striped clothes and an Argentinian prisoner outfit. Here’s another one of the latter sort, on display at the Museo Penitenciario Argentino in Buenos Aires:

Naturally occurring black and white stripes are mostly associated with zebras, like these in this unusual photo:

Now the juxtaposition of these two species in the same place (you wouldn’t get to see that in the savannahs of Africa!) may look a bit bizarre, and you could rightly ask: but what’s the association with dark tourism? It’s this: the photo was taken on the Croatian island of Brioni, which used to be the main private resort of Tito, former Yugoslavia’s leader (some would say dictator). He passed away in 1980, but some of the menagerie of animals he kept on the island are still there (or their offspring). The former guest house now welcomes tourists and one of the island’s attractions is the on-site Tito Museum, where the cult of personality about Yugoslavia’s big man is still alive and kicking.

Zebras also inspired the common name for a type of road crossing for pedestrians: zebra crossings. Normally these are also black and white stripes, but in the district of Castro in San Francisco these have been replaced with crossings with stripes in rainbow colours:

The reason for the rainbow colours here is that Castro had become the epicentre of the gay rights movement in the USA in the 1960s and 70s, and this also included some dark aspects, in particular the assassination of Harvey Milk in 1978, who was the first openly gay man voted into a government office in the US. There’s a monument to him in Castro and his story is featured in a special topical museum about the area and what it stands for.

Also in Castro I spotted this rainbow-coloured version of the US flag flying outside one building:

This finally takes us to what I bet you’ve been expecting all along from the title of this post – THE Stars and Stripes – although you probably didn’t expect it in rainbow colours but in its unmodified form, such as in this photo:

This particular stars-and-stripes flag is flying atop the “Iwo Jima Monument” in Arlington on the edge of Washington D.C. … actually it’s called the Marine Corps memorial, but it’s informal name springs from the fact that the sculpture recreates the iconic photo staged as a symbol of victory in a battle against Imperial Japan on the island of Iwo Jima in the Pacific theatre of World War Two.

The highly iconic flag of the USA also lends itself to various juxtapositions and I’ve collected a few over the years. Here are some examples:

This first one was taken at the memorial fence on the western perimeter of the Oklahoma City National Memorial. This mainly commemorates the worst terrorist attack on US soil before 9/11, namely in 1995, but the fence has also informally been used by people to attach mementoes dedicated to other stories and atrocities (e.g. the shootings on Utøya island in Norway in 2011). Yet you can read a lot into this image, what with it also including a small Christian cross and a chain throwing shadows on the flag, which itself is behind the fence …

Another example involving a US flag behind another wire-mesh barrier, is this:

This photo was taken not in the USA, though, but in Germany, namely at the Emigration Center in Bremerhaven, which includes a recreation of the arrivals section of Ellis Island, New York, where would-be immigrants were checked over before being allowed into the country. Visitors can even go through a mock interrogation with an “immigration officer” at an interactive computer station to see if their answers to the questions asked would have passed the test or whether you’d have been rejected. (I passed, but only because I already knew from another emigration-themed museum in Hamburg which were trick questions, so for instance I did not reveal the fact that I have relatives in the USA … apparently if you already had relatives in the country you would be held in custody until one of them came to collect you.)

Back to the actual USA, this following photo was taken at Fremont Street in downtown Las Vegas, Nevada, namely during a light show display on the inside of the LED-screen roof over the pedestrianized portion of the road:

At one point in the show the image of the Miss Liberty statue in New York swooshed past against the backdrop of the stars-and-stripes flag … and obviously this opens up some re-interpretation possibilities too (civil liberties drifting out of view?).

The following juxtaposition is a drastic one and seems to suggest banning guns in the USA:

In fact gun sales have surged in the US this year, to a record 17 million in 2020 so far! Apparently that’s in part a reaction to the current crisis, demonstrations and clashes with police (I’d like to see someone trying to shoot at a virus, though). The photo, however, though taken in the USA, namely at the Newseum in Washington D.C., shows an artefact from elsewhere. It was in the war correspondent section, and this was the lid of a laptop used by a journalist during the siege of Sarajevo in the 1990s. The juxtaposed images thus indicated that the journalist worked for a US network, and that he was an unarmed member of the international media.

And as the final image of this post I repeat the lead photo from the top. This warped image of stars and stripes was taken on a mirrored glass facade of an office block in Oklahoma City:

Of course the reason why I chose the theme of stars and stripes for today is the fact that the world’s eyes are on the USA on this date because of the presidential election. But we will have to wait at least until tomorrow morning before we’ll know a/the result, possibly a few days longer if it gets tight. Nerves will be on edge all around, I’m certain, not just in North America but globally …