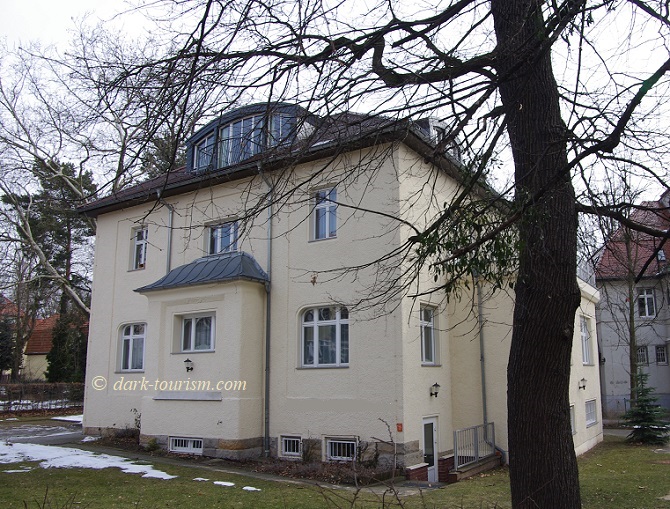 Let’s start on a grand scale. This is Villa Grande:

This grand pile, more a stately mansion than a mere villa, really, was the oversized home of Vidkun Quisling, the right-winger who assumed power in Norway during World War Two as Germany‘s Nazis invaded, with whom he happily collaborated. That’s what’s given the English language the expression “a quisling regime”!

Today the building houses Norway’s capital Oslo‘s Holocaust Centre, which I think is fitting and partially compensates for Quisling’s co-operation also in that grim chapter of history.

Next up is a no less grand mansion called Villa Torlonia in Rome, Italy, which was home to an even more infamous right-wing dictator, and the father of fascism, Benito Mussolini.

Here the Duce (‘leader’), as he liked to be called, held court in grand receptions with dozens if not hundreds of guests, received foreign dignitaries and, on a quieter, more discreet level, his mistresses. But he actually lived here with his family too. Paranoid about the possibility of Allied air strikes (which did in fact hit Rome, but never Villa Torlonia) he had an air-raid shelter built, first in a former wine cellar next to the house, then in the basement underneath Villa Torlonia proper, and finally he had a full-on reinforced concrete underground bunker constructed that was located underneath the park around the house, connected to it by an underground tunnel. It was never quite finished, though. Before it was ready for use, Mussolini had been ousted and so construction was halted.

After many years of neglect and after having almost been forgotten, this bunker has more recently been refurbished and made accessible to the public (if only on guided tours). The main house, meanwhile, is now used as an art gallery.

Visually much less grand, but certainly even darker historically is Villa Grimaldi in Santiago de Chile. During the military dictatorship of yet another right-winger (see a pattern developing here?), namely Augusto Pinochet‘s, this place was turned into the primary clandestine detention and torture centre in the capital of Chile from 1973 onwards. Some 4500 political prisoners are believed to have passed through this grim institution, of whom at least 200 “were disappeared” (often by dropping the tied-up and sedated victims into the sea from helicopters). This photo shows the watchtower that was constructed at the Villa Grimaldi site:

Today the complex is one of the main memorial centres dealing with this dark period of Chile‘s modern history, which still has repercussions today. It now bears the epithet “Parque por la Paz” (‘peace park’) and houses monuments and topical exhibitions. Especially poignant is a small exhibition in a purpose-built modern annexe in which remnants of rusty iron rails are on display – victims of the “disappearing” operations were often tied to such weights to not only make them drown quicker, but also for the bodies not to bob to the surface. Occasionally tiny remnants of victim’s clothes could be salvaged from the seabed too, such as a shirt button which is now picked out by a magnifying glass in one of the display cases:

If you thought it couldn’t get much darker than that, think again. Next up is this pretty mansion, at least a villa, but humbly referred to simply as a ‘house’. This is the House of the Wannsee Conference in the south-west of Berlin, Germany:

It was here that on 20 January 1942 some 15 top-dog Nazis had a “business meeting” to discuss how to co-ordinate what they called “Die Endlösung der Judenfrage” (‘the final solution of the Jewish question’), the worst phase of the Holocaust. It was at this meeting that it was decided to use gassing for the systematic mass murder on an industrial scale of all the Jews held in ghettos and concentration camps, especially in Poland. The conference was chaired by Reinhard Heydrich – hence the construction of the three dedicated death camps Treblinka, Sobibor and Belzec and the mass extermination of Jews in their gas chambers was code-named “Aktion Reinhard” (‘Operation Reinhard‘). Heydrich himself was assassinated in Prague a few months later, so he never saw the full implementation of the ‘Final Solution’.

Also present at the Wannsee Conference was Adolf Eichmann, another prime “Schreibtischtäter” (difficult to translate: the literate ‘desk perpetrator’ doesn’t capture it … what is meant by this is somebody who doesn’t carry out the evil deeds himself but administers them bureaucratically without getting his own hands dirty). Eichmann took the minutes at the meeting and from them prepared the document that set the “Endlösung” in motion. He survived the war and fled to South America, but was later captured and abducted by Mossad agents and put on trial in Israel (he was sentenced to death and executed). The footage of this frail little bureaucrat showing no remorse for what he had done is amongst the most striking of any Nazi trial.

But back to more villas. Here’s one of a ruin.

This was Casa Caoba, which was one of the mansions built for Rafael Trujillo, the Dominican Republic‘s ruthless dictator from 1930 to 1961. In fact this was his favourite residence (he had several), and he would hold grand feasts here. But it was also here where he committed the majority of his sexual crimes. He was known for “feasting” on thousands of (often underage) girls, preferably virgins, who his minions picked up all over the country and delivered directly to their master’s bedroom door. This was his bedroom:

It looks inconspicuous now – but if you know that this was the brutal serial rapist’s principal den, it takes on a very sinister aura …

Back to Germany. This villa stands in Dresden, Saxony, just a stone’s throw from the local Stasi HQ and remand prison at Bautzner Straße.

This villa is, however, not dark because of an association (at least not directly) with the Stasi. It was the residence of one Vladimir Putin, who in the 1980s was the chief of the KGB in this part of what was the GDR! As we all know, Putin went on to a much grander and more powerful position in Russia, but his former residence still stands. When I visited Dresden a few years ago, I found that the building is now home to one of those anthroposophical Rudolf Steiner schools!

Finally back to Chile again, to the coastal city of Valparaiso this time, where my guide pointed out this pretty wooden villa, which is “haunted” in a different way:

Allegedly, so my guide claimed, this villa is “haunted” because some murder took place inside it – hence nobody wants it now and it just stands abandoned and falling into dereliction. I personally don’t believe in haunted houses, ghosts or any such “paranormal” stuff, but I thought it was a pretty image to end this villa-themed post with.