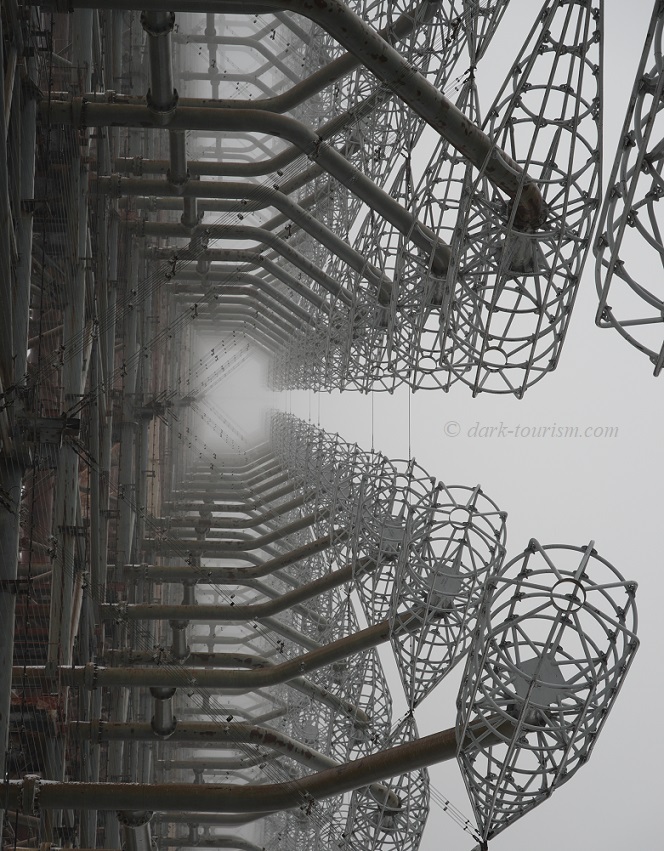 It was part of the Soviet Union’s Cold-War-era early-warning systems supposed to detect the launching of missiles aimed at the USSR. Its location close to the Chernobyl NPP is apparently no coincidence, as such an installation required loads of electric energy. In the West it acquired the nickname “The Russian Woodpecker” due to a knocking noise often interfering with amateur radio that was traced to have come from within the USSR. (And back then many in the West didn’t distinguish between “Russia” and the “Soviet Union”, so it came to be that it got that nickname despite it being located in Ukraine not Russia.)

You can read more about this installation in this chapter on my website. Here I want to concentrate just on the visual aspects.

I’ve been to Duga twice. On my first Chernobyl trip back in 2006, the abandoned site was still off limits to civilians (and never visible; I only learned about its existence in later years). But it did form part of my second Chernobyl trip in May 2015. I caught the first distant glimpse of it from the rooftop of that 15-storey apartment block in Pripyat. This is a cropped image:

On the second day of that trip we drove up to Duga and walked around the base. I was totally in awe of this strange and massive object. It’s so huge that from up close it’s impossible to fit it into a single frame even with the wide-angle lens I had taken along. (I meanwhile own an even wider lens, so next time I will try it with that!):

There are two installations side by side, in fact. Together they are more than half a mile (750m) long and the taller of the two is 500 feet (150m) high. But apart from the sheer size, it’s the mysterious technology that wouldn’t look out of place in a James-Bond movie or Doctor Who episode; that really makes for distinctly Sci-Fi-like appeal. You can further enhance that by photographing it at odd angles, like in this photo:

Once tiny lifts could take personnel up if maintenance work was required. But these elevators have of course long been disabled and electric components broken off and taken away:

These days the only way up would be by the rusty ladders you can also see. It’s said to be a workout, taking a healthy young man about half an hour to reach the top. I didn’t attempt it. I looked at the rusty bent ladders and didn’t trust them to necessarily support my weight:

But I’ve seen footage of daredevil stalkers prancing about precariously at the top (you can see images in this blog post from last year from a film about stalking Chernobyl). Not only does this look foolhardy, it evidently is. As I’ve read in this excellent book (my review), one stalker fell to his death from Duga a few years ago.

I stayed safely at ground level and just enjoyed the photo ops even down there. Here’s one of my favourites, as it looks almost like an optical illusion of a reflection, but it’s just straight cables spun between two components of the array on every level:

On my return trip to Chernobyl in November 2018, my guide took me back to Duga as well, and this time we found it atmospherically semi-shrouded in mist:

Incidentally, the radiation-warning sign may suggest greater contamination than there actually is at this site. Our Geiger counter remained rather calm the entire time we were there. Anyway, it was a fantastic sight to behold looking up:

Again, using different angles, some very atmospheric photography was possible. Here are two of my favourite shots (one of them already featured above):

On this occasion in 2018, we spent much longer at the site and also explored the control rooms and the abandoned small garrison town behind the huge radar arrays that once had the code name Chernobyl-2 and was a closed military town (now it’s a ghost town). Here’s a photo taken from the rooftop of the building directly behind Duga:

The inside of the control centre had been heavily looted, but here and there you could make out computer frames and remnants of monitor screens, as on this console:

There were also training rooms, a model of the installation, Cold-War-era propaganda posters and in one room there was this fantastic space-age wall mural, which was even in surprisingly good condition after all these years of abandonment:

We explored various buildings, including a fire station, a cinema/theatre and a sports complex before heading back out.

Back at the checkpoint at the entrance to Duga/Chernobyl-2, we were eyed by a grim-looking dog behind a gate. I was glad the dog was on the other side …