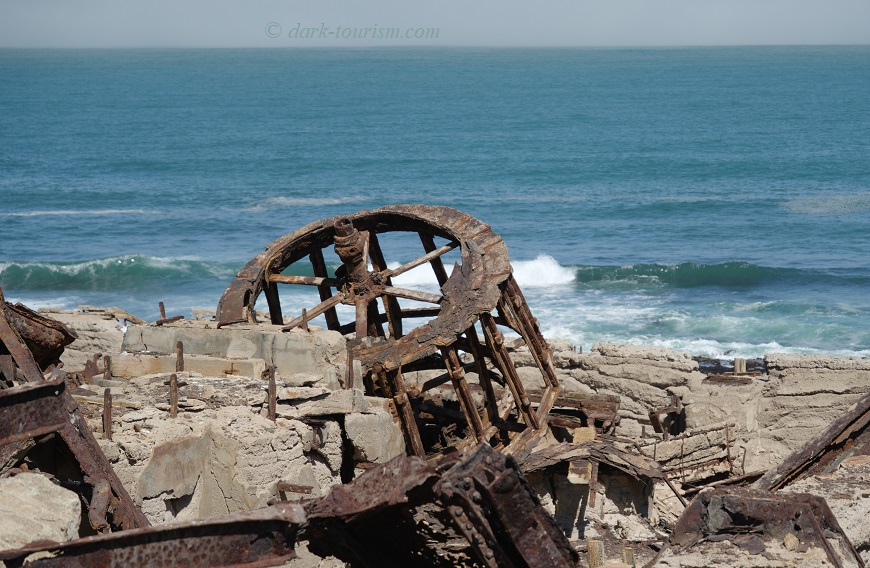 The name comes from the actual Elizabeth Bay on the Namibian Atlantic coast where the town and diamond mine were established in the 1920s. The bay was given its name by the British in the mid-nineteenth century, during the German colonial era it was known as “Elisabethbucht”. Locally the name is these days often abbreviated to “E-Bay” (confusing for those who use the online auction website of the same name). Unlike at Pomona or Kolmanskop there is still a working modern diamond mine at Elizabeth Bay (see below).

As with Pomona, access is only possible by guided tour with a local operator who has the concession to do so, and permits issued in advance are required to be allowed into the “Sperrgebiet” (‘forbidden zone’, the restricted-access diamond-mining area in the south of Namibia – see under Kolmanskop). As “E-Bay” is closer to Lüderitz, where the tours start, this is only a half-day excursion. At the ghost town we had well over three hours and I spent that time frantically exploiting all the fantastic photo opportunities.

As this ghost town is very close to the ocean, it is prone to being engulfed by the typical coastal fogs that form from the cold Benguela Current, especially in the mornings and evenings. And indeed, as we arrived there was still some fog lingering:

After a short while, however, the mist began to lift and the sun came out. You can see the receding fog bank in the following photo – in the foreground are the pier and water intake for the current diamond processing plant.

But not much later on the fog lifted enough to reveal a full view of the bay:

Turning around 180 degrees the view goes towards the former diamond processing (separation) plant of the old E-Bay mine:

We then explored this from close up – it’s a fantastic industrial ruin full of rusty and bent steel and this maze of steel pillars:

I’m sure the proximity to the sea and the regular coastal fog cause a faster corrosion here than at Pomona. Look at that big wheel-like thingy in the next photo (same as the featured one at the top of this post):

Another difference to Pomona and Kolmanskop is that here there is much less desert sand, so you don’t get those atmospheric scenes of half sand-filled or semi-covered buildings. It’s more a rocky desert here:

On the right in this panoramic view are the residential houses of the white colonial miners, in the middle is the general shop, in the far distance is the housing for the local (black) manual workers, and on the right some auxiliary buildings as well as the mine director’s mansion.

En route to the residential buildings stands what is left of the large ex-community centre. This was mostly too risky to enter. Just look at this extremely dilapidated piece of the front facade:

Some of the former residential buildings are extremely eroded from the coastal wind and fog. Interestingly, it’s often the bricks that are more eroded, sometimes completely gone, while the cement that holds/held them together is still there, creating some bizarre shapes and patterns:

Yet another difference to Pomona and Kolmanskop is that you can often see the ocean in the background, as in this next shot through some more bizarrely eroded structures with precariously hanging empty window frames:

While some residential buildings are severely eroded, of some little more than the foundations is left, some others are better preserved. And inside one of those I spotted this fantastic wall mural depicting a tropical island paradise with palm trees. Pretty much the opposite of the reality at Elizabeth Bay …:

At the far end of the whole ghost town complex were the blocks of housing for the local (black) workers. As in Pomona, these labourers had to make do with just simple niches in communal sleeping quarters without much privacy. But unlike at Pomona, here they came in double tiers. By now these blocks are also quite dilapidated:

At the very far end of this complex was a larger workshop building with a boiler room and a large kitchen. The brick chimney is still standing, but the rear wall showed cracks from the roof to the ground on both sides, so that will probably collapse before too long.

At the other end of this large building the roof was already missing and parts of the wall too, forming a kind of brick arch:

As usual at these Namibian diamond-mining ghost towns, the mansion for the former mine director is not only the grandest but also today the best preserved building:

In fact it is partly still in use. It was in the courtyard of this building that there is a little on-site museum with some artefacts, period photos and a German plan of the town back in the day. It was also here that our guide put out a spread of snacks (including home-baked pastries) and hot tea and coffee for us to help ourselves to.

As in Kolmanskop, I found some traces of brown hyenas at Elizabeth Bay. In this case not just tracks, but also droppings. The white colour is a telltale sign of hyena poo. That comes from the fact that hyenas can, and do, actually eat bones (see also here).

Finally, we also saw the current diamond mine and processing plant at “E-Bay”, though obviously we couldn’t get close, let alone go in. But I took this photo as we were driving past en route back to Kolmanskop:

Of the three ghost towns in Namibia that I visited on three consecutive days, Elizabeth Bay was perhaps the most fascinating for its industrial ruins, all that bizarre erosion and also the fabulous coastal location (and that fog!). On the other hand it lacked those atmospheric intrusions of desert sand into the interiors that you find at Pomona and especially Kolmanskop, which makes particularly the latter so extremely photogenic.

But so much for ghost towns. The next blog post will be something different, although possibly still more from Namibia …