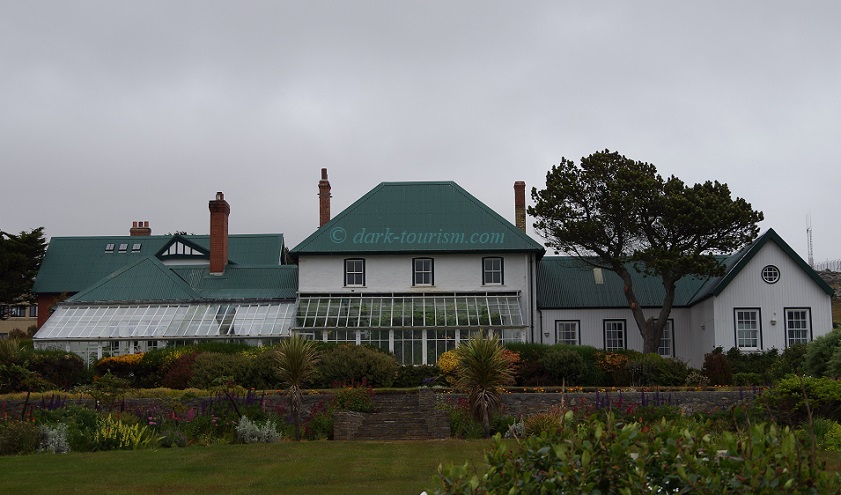 Amongst the first targets of the landed troops was Government House in the Islands’ capital Stanley, which you see in the photo above (I took this in late December 2013). The governor had only a small handful of Royal Marines for the defence of the town at the time, so they were quickly overwhelmed and had to surrender. And so the occupation began.

2 April 1982 was not the end for British rule over the Islands, however. Instead it was the beginning of what would turn into a 74-days-long war, in which, as we all know, it was the British side that, after a daring military operation 8000 miles away from the homeland, gained the upper hand in the end and liberated the islanders from the brief Argentine occupation.

When I was in Stanley on New Year’s Eve 2013, I was given a tour of some of the battlefields around Stanley where the final decisive battles were fought, and my guide was one of *the* veterans of battlefield tours on the Islands. He had also been an eyewitness of the conflict. In fact he was right in the midst of it in those days in April 1982. He operated the local radio station, and as the invasion was unfolding distributed accounts from callers all around the Islands where the Argentinians showed up. Eventually, of course, they stood at his door with machine guns in hand as well and he had to surrender the radio station. He was given the choice of leaving or staying on and co-operating. He chose the latter, on the basis that it was probably better if the islanders heard the orders issued by the new power in charge at least from a familiar voice (rather than from some heavily Spanish-accented Argentinian voice), in order to keep things relatively calm. He stayed in Stanley with his family during the occupation and continued to work at the radio station. He later also witnessed the Argentine surrender. In the immediate aftermath of the war he was involved in the clear-up after the battles and later became a dedicated researcher of the whole Falklands War, but especially the battlefields around Stanley. His were quite some insights. Invaluable.

Here are some more photos from that day on and around Mt Longdon where some of the decisive battles played out. This it what battlefield tourism in this rough terrain looks like:

You need a sturdy vehicle like this – and be able to handle it. On our way down we passed a another 4×4 that had got stuck in the peat bog who needed help to get them out.

On Mt Longdon we were shown various war relics, such as this former Argentine gun position:

Amongst the bigger artefacts we saw was this heavy gun barrel:

Apart from remnants of weapons, there were also countless more mundane objects to be found amongst the rocks.

Dotted around were also little memorials to the fallen, sometimes just the odd little poppy or simple individual plywood cross, sometimes whole clusters of such mementoes, as well as some official plaques, even with names.

Most unexpectedly there was also a rather large monument made from cut granite with a plaque and metal poppies attached:

Back downhill we checked out some more Argentine relics in the barren landscape, before returning to Stanley.

Again, there were various objects to be found, including one rather big one:

The most remarkable objects, however, I thought were the smaller, personal ones, such as these:

These items were hidden inside an ex-Argentine position but our guide knew exactly where to find them … and after showing them us he took great care to put them back in their hidden place so that they wouldn’t end up as battlefield souvenirs. You are not supposed to take anything, but people have done. Even quite heavy objects like gun barrels have disappeared over the years. I wonder how people got those items through customs at Mount Pleasant airport, because the checks were really thorough. (Mount Pleasant is the RAF base on the Falklands and the runway is also used by the civilian planes that fly there from Chile.)

Anyway, not least due to these battlefield tours my trip to the Falklands remains one of the most intensely memorable ones I’ve ever undertaken. It was also one of my most educational trips, prompting me to carry on with much additional post-trip research into the origins of the conflict and the whole status of the Islands, which is often quite ill understood by the general public …

[Note: parts of the text above were adapted from an earlier text that I lifted from my archives of former posts that used to be on my purged Facebook page, namely from what I had posted there exactly three years ago today.]