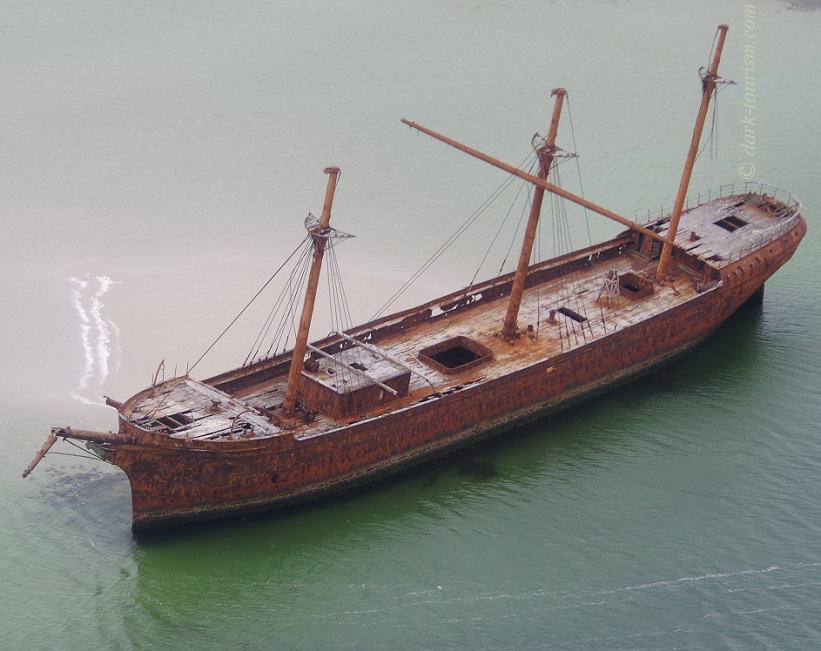 Yesterday, the until recently most talked about dark-tourism destination in the world, Chernobyl, was in the news and all over the Internet again. There were reports of the Chernobyl NPP having had its electricity cut off by the Russians, who currently occupy the region. This sparked some fears that this might lead to disaster, or at least to some radiation leaks. But the IAEA (who should know these matters) quickly issued a statement saying that they reckon such risks are in actual fact very low. The spent fuel rods in storage at the plant are decades old and as long as they are kept under water, they won’t overheat even without any electricity. Still, this further intervention at Chernobyl rightly sparked outrage. Without electricity, the workers decommissioning the plant cannot do their jobs, which includes dismantling the old sarcophagus now under the New Safe Confinement structure by means of remote-controlled machinery. See also this recent press release by the IAEA (external link, opens in a new tab.)

But now to the feel-good story. Also on the news yesterday were reports about a sensational discovery in the Antarctic waters. An expedition managed to track down and photograph the wreck of the Endurance, the ship of Sir Ernest Shackleton’s 1914-16 Antarctica expedition, also called “Endurance”. The ship hit pack ice early on, got stuck in it and was thus immobilized. As the ice increasingly crushed the vessel, it had to be abandoned by the crew who camped off-board on the ice. The ship eventually sank on 21 November 1915.

After that, Shackleton and his men made the remarkable journey to Elephant Island, first on foot and then with the help of a couple of lifeboats from the Endurance that they had taken along. Leaving most of the crew camped at Elephant Island, Shackleton and a few of his men then sailed one of the boats all the way to South Georgia – a remarkable nautical and navigational feat given the ca. 800 miles distance they had to cover. After hitting the south coast in May 1916 they then had to climb over a mountain range and reached an outpost of civilization in the form of the Norwegian whaling station of Grytviken. (OK, some may say that whaling isn’t exactly the best beacon of civilization, but you know what I mean.) From there they were able to organize help, and eventually the entire crew that had been left camped on Elephant Island could be evacuated in August 1916. Not a single man was lost!

This outstanding story of, literally, endurance, leadership and heroism would have made big headlines back in Britain, had it not been for the fact that at the time World War One was raging in Europe. And so only very little attention was paid to Shackleton’s story at the time. Shackleton began another expedition in 1921 but died of a heart attack while at South Georgia on 5 January 1922. In accordance with his window’s wishes he was buried right there at Grytviken, at the very whaling station he had miraculously reached in 1916. In a way he had come full circle.

The ruins of this ghost town of Grytviken (it was abandoned in 1965) and Shackleton’s grave there are a regular stop on those few South Atlantic cruises that make it to South Georgia, usually as part of a longer trip including the Antarctic peninsula and/or the Falklands. So this is one of the most remote dark-tourism destinations in the world. (One that I will probably never get to see, given this remoteness, my aversion to cruises and the extreme costs involved.)

Now, a century after Shackleton’s burial on South Georgia, an expedition organized by the Falklands Maritime Heritage Trust called “Endurance22” (financed by a large sum from an anonymous donor) managed to locate and inspect the wreck of the Endurance off the coast of Antarctica at a depth of just over 3000m. The wreck is in remarkably good condition, thanks to the icy waters which keep wood-eating worms away and generally act as a preservative. In line with the Antarctic Treaty there were no interventions with the wreck and no artefacts were salvaged, but the wreck was 3D-scanned, photographed and filmed with the help of hi-tech, remote-controlled submersibles. Here is the official press release (external link, opens in a new tab).

Please note that the photo at the top of this post obviously does not show the Endurance. Instead it’s the wreck of the Lady Elizabeth, which since 1936 has been stuck, i.e. partially beached in shallow waters in the bay outside Stanley, the capital of the Falkland Islands. I visited the archipelago in 2013/14 and took this photo from a small plane that took me to Stanley from Port Howard on West Falkland. But since the expedition that located the Endurance was organized by the Falklands Maritime Heritage Trust, I thought the connection was good enough.