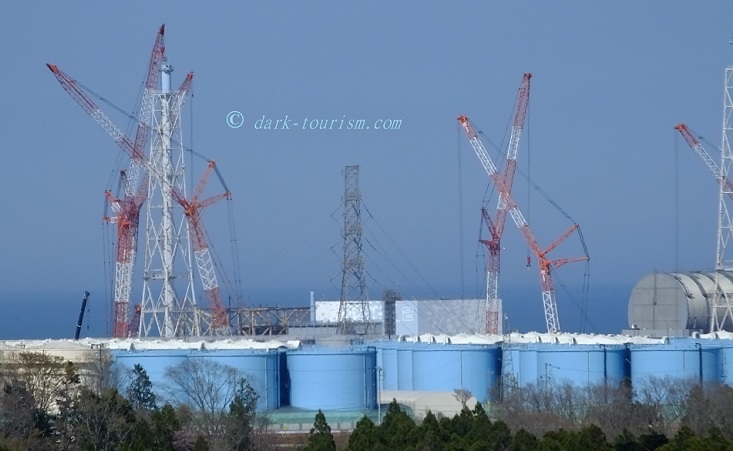 You may have seen some headlines about Fukushima lately, namely about the site of the stricken nuclear power plant (NPP) planning to release a million tonnes of radioactive water into the Pacific Ocean. This is not actually news, as this move has been in the pipeline for a long while, nor is it all that sensational and threatening. Over a year ago there were already similar headlines (about the possibility of such a move coming), and on my ex-Facebook page I posted the following text in reaction to this article:

“This recent article is about an issue that may at first look much more alarming than it ultimately is. When I was in Fukushima in April this year, I was already told about this, including the controversial possibility of releasing (at least some of) the accumulated water from the tanks into the ocean. Of course simply putting “radioactive water” makes it sound scary. But one has to remember that this is only about tritium (hopefully – see below).

Amongst the stacks of documents and charts I was given was also one comparing the relative levels of radioactivity for different radionuclides. Tritium was at the very bottom of the table at ca. 1/32 of carbon 14, 1/344 of potassium 40 or 1/1222 of iodine 131. So it’s quite low, really. Moreover, tritium-contaminated water is regularly released by reprocessing plants in France and the UK without that causing much of a media stir. But Fukushima (like Chernobyl) is different, of course. Sensationalism lingers at every corner, conspiracy theories are never far away.

A much greater element at play here is actually one of plain marketing considerations rather than one of nuclear physics. The locals, in particular those involved in the only recently rebuilt fishing industry of the region, fear that news of a release of Fukushima’s tritium water could be a major PR disaster for them. And of course those fears may be well founded.

What is, however, much more worrying in this article is the little side remark that alleges that TEPCO may not after all have managed to filter out all the other radionuclides from the water, as was also confidently claimed when I visited. But if that is indeed not the case, I mean if that claim is wrong and they failed to filter everything else out, so that other, more dangerous radionuclides are still in the water, then that would mean that the release of this water could be much more problematic. I wonder if we will ever get to know for sure …”

In this new article in The Guardian they do mention that the release of tritium is quite routine at other nuclear sites, but the PR worries of the local fishermen are nevertheless quite real. They point out that South Korea, for instance, has still not lifted its ban on the import of any seafood from the Fukushima coastal waters, and they’ll be quite unlikely to change their stance if the tritium is released, with the very likely accompanying media panic.

I also checked other media outlets, and the first few dozens that were returned in my online query were predominantly of that sensationalist nature just saying “contaminated water” or “radioactive water”, but quite a few commendably at least said “treated water”.

More worrying, however, is all that contaminated topsoil scraped off the land in the Fukushima exclusion zone and currently held in millions of plastic sacks in open-air storage facilities. What’s to become of that long-term is uncertain. Even worse is what’s at the core (pun intended) of the problem: the reactor cores that suffered meltdowns in the 2011 disaster. These still have to be removed … and then the question will be what to do with that highly radioactive waste. And there’s also still material in the spent-fuel pools. So there are bigger worries than all that water.

If you’re wondering where all those masses of contaminated water come from: it is because of groundwater that accumulates in the basements of the destroyed reactor blocks and hence gets into contact with radioactive materials. So this water has to be constantly pumped out and sent through the filtering plant and then stored on-site in big tanks, such as you can see in the above photo against the background of all those cranes at work at the reactor blocks (which are also visible, just about, including the block with that new rounded superstructure on top). But space is limited, which is the main reason for the plans to release the water into the ocean. They simply can’t carry on adding endless numbers of additional water tanks.

To connect the topic to that of dark tourism: in spring last year I went on a two-day tour of the Fukushima area, including parts of the Red Zone (aka “difficult-to-return-to zone”, i.e. the total exclusion zone), with a special permit and a guide. We were not allowed into the premises of the NPP, but we could see the plant from a nearby hill – and that’s where I took the above photo from (with a zoom lens, we were not as close to the plant as it looks in this image). The most interesting parts of the tour, however, were the ghost-town street of the abandoned town of Okuma and the ruins of a fish farm and processing plant on the coast that was destroyed by the tsunami of 11 March 2011.

For those who have seen the Fukushima episode in the 2018 Netflix series “Dark Tourist” (here’s my in-depth review) I’d like to add this: my tour was the real thing, with an actual guide who works with the local authorities and who obtained official permits. We were also given measuring devices calculating the accumulated extra radiation exposure during the tour and it stayed within the margins we had been told beforehand. Ambient radiation was elevated to a degree along the road through the Red Zone, and a particular “hotspot” was the uncleared undergrowth next to the fish-farm ruins. But it was nowhere near any levels justifying the degree of panic put on for the Netflix series. And it was put on. What you see in the series is not a real tour, as I found out at Fukushima (the guide in the series is not a real guide and the “tourists” were apparently hired). Unsurprisingly the locals were quite unhappy about the exaggeratedly sensationalist portrayal of Fukushima in that series, not just about the illegal activities also shown in it (unauthorized entering of an abandoned Pachinko hall) but also that all the recovery efforts were omitted … and then that ludicrous scene about whether the restaurant food was safe to eat. (It was, the local health-and-safety regulations are actually stricter than they are in Tokyo.)

But so much on this topic here. Do take a look at the full account of my Fukushima tour on DT’s main website, though.