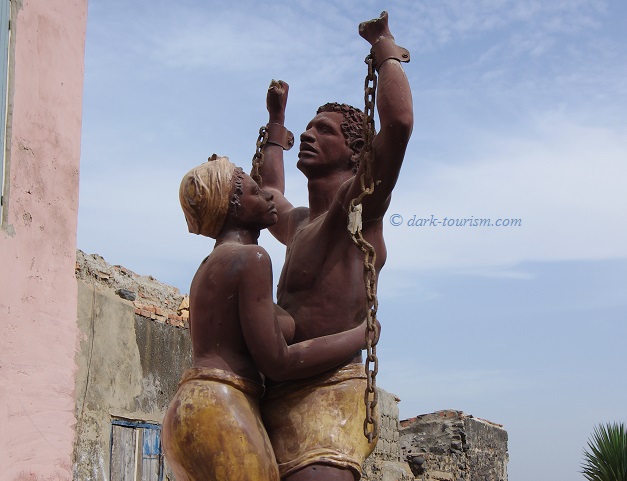 Juneteenth – and the topic of slavery in dark tourism

Today is the 19th of June, celebrated as “Juneteenth” in the USA. Narrowly defined it commemorates a declaration of emancipation/freeing of slaves in Texas in 1865 on that date, but is now more generally celebrated to mark African Americans’ civil rights and freedom. Amidst the current Black Lives Matter protests, this date has been given an extra boost.

Regarding the subject of slavery, this also features in dark tourism. Sites related to the Transatlantic Slave Trade in particular have become specific travel destinations, both in several countries of origin of the slaves, predominantly in West Africa, as well as in places where these slaves were transported to and were used for forced labour, mainly in the Americas.

The former include several of the forts (e.g. in Ghana, Benin, Nigeria, the Gambia and others) used by the slave traders to hold the captives who were to be shipped to the Americas and sold as slaves. Perhaps the best-known particular place in this context is the Maison des Esclaves (or ‘House of Slaves’) in Senegal, now one of the principal tourist attractions of the country’s capital city, Dakar.

The House of Slaves is located on a small island, Île de Gorée, in the harbour of Dakar, connected to the mainland by ferry. On the island you can also see a “freed from slavery” monument, featured above. (I know it’s a bit crude, and unfortunately also damaged … see the broken hands: the chain may be broken, but so are the fingers of the freed slave’s hands!)

At the Maison des Esclaves itself, tourists can explore the old dungeons in which the soon-to-be-slaves were housed before their harrowing transatlantic journey aboard overcrowded ships. This one was labelled “enfants”, so it was for children: 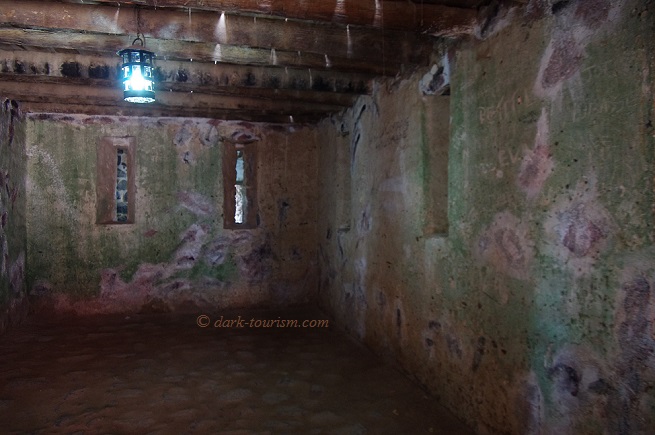 It was in fact quite common to send youngsters into slavery. From the point of view of the slave traders, this made sense: they were less likely to be “recalcitrant” than adults, and for their future “owners”, a slave being so young promised more “mileage” as forced labourers, especially in the plantations, where most of the slaves ended up.

The passageway through which the enslaved unfortunates went to board the ships is known as the “door of no return” at the Maison des Esclaves. Indeed a grim outlook, and the light at the end of this passageway promised nothing but a life of hardship, if not death at sea (the slave ships regularly lost a certain percentage of their “cargo” to diseases or mistreatment, somewhere between 10% and 25% of every shipment!). 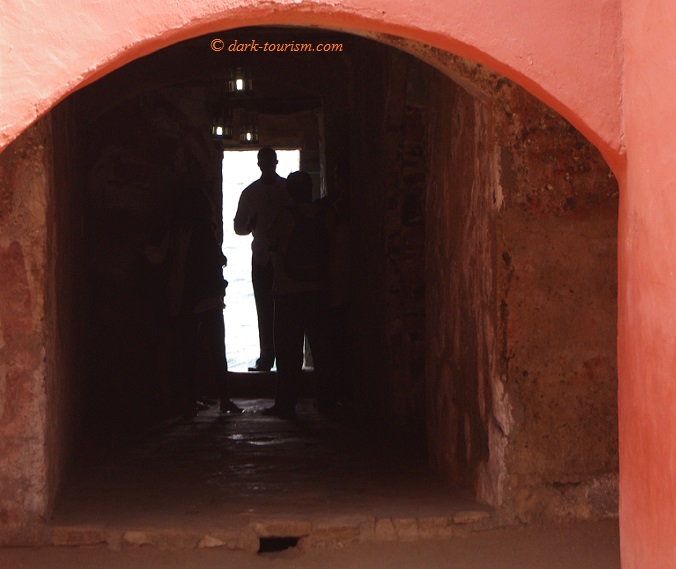 At the destinations of the slave trade shipping routes, you can here and there also find sites dedicated to this colossally tragic and cruel period of history, e.g. in the Caribbean such as at the slavery museum in Kura Hulanda in Willemstad on the Dutch Antilles island of Curaçao. In the former Dutch colony of Suriname in South America I also spotted various items related to that part of the world’s legacy of slavery (mainly in the countless sugar plantations), such as these shackles: 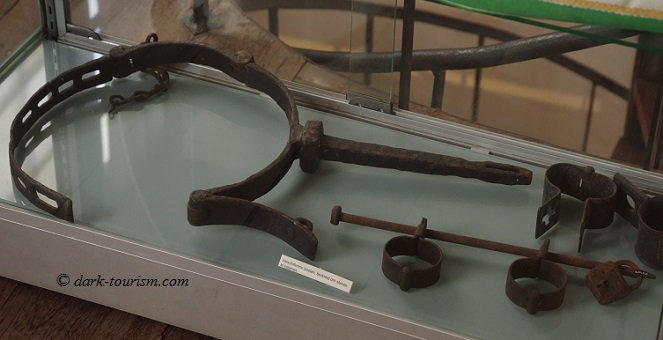 These are artefacts on display at the museum exhibitions inside Fort Zeelandia, the historical core of the ex-colony in the capital city Paramaribo. Also amongst the exhibits was this flagon that a sign comments on (in Dutch – this is my translation): “Flagon with depictions of two slaves, Andreasi and Akotti. There are few objects left on which slaves are depicted in such a way”. Indeed. It reminds me a bit of racist cartoons from the 1930s. 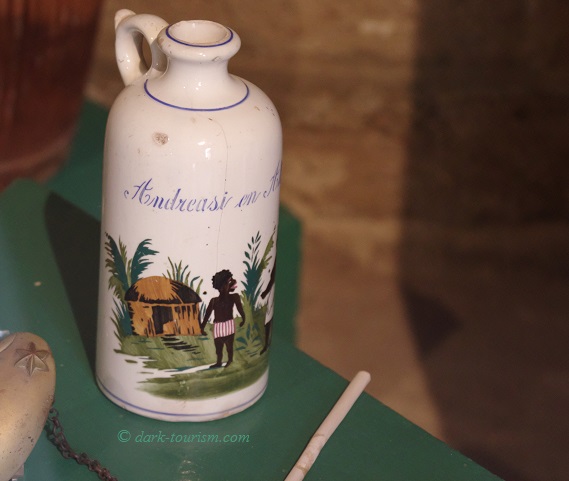 Islands in the Atlantic were often used as stopovers and distribution centres, such as what today are the Cape Verde Islands. And here too the odd relic from the slave trade days can still be found, such as this old pillory in Cidade Velha on the main island Santiago: 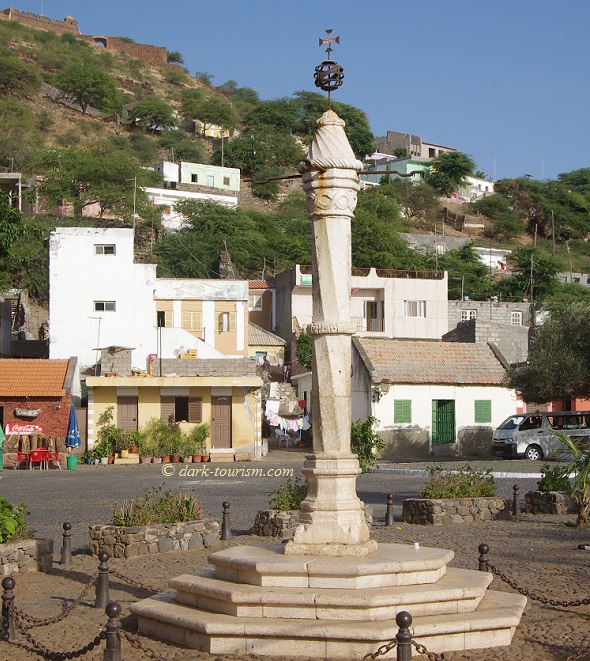 Further south in the Atlantic is another island that has a multiple connection to slavery: St Helena. Slaves were put to work here, and also not only sold but even “let”, as announced on this historic poster on display at the Museum of St Helena in Jamestown: 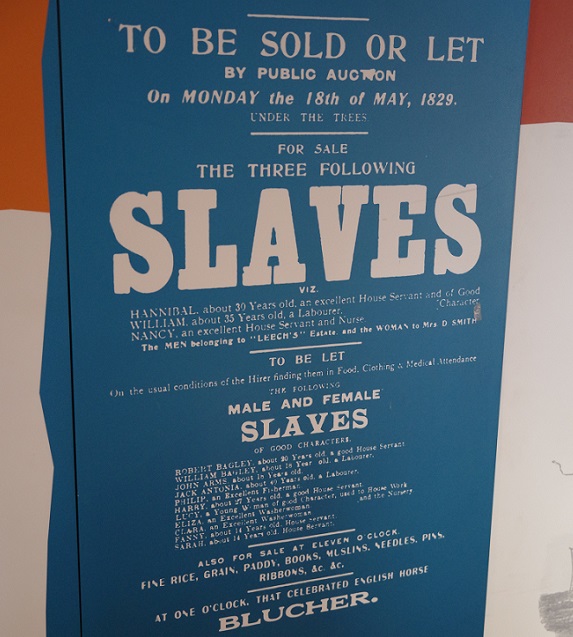 What I find particularly cynical about this poster is the fact that the offering for sale or hire of slaves as “commodities” comes together with offers of food items, household objects and even a horse!

St Helena, however, also played a role in the end of the Transatlantic Slave Trade. After the British Empire abolished slavery in 1834, the Royal Navy began hunting down slave ships and between 1840 and the mid-1860s thousands of freed slaves were deposited on St Helena. Some 5,000 of these died on the island from diseases they had already contracted, many others were later moved on, but a few hundred ex-slaves stayed on the island. As recently as in 2006, burial grounds of former slaves were discovered during a road construction project in Rupert’s Bay, which led to an extensive archaeological survey. Some of the items found are now on display in the Museum of St Helena.

The latter is also in collaboration with the main institution covering the topic in Britain, namely the International Slavery Museum at the historic Albert Dock in Liverpool. Amongst the many exhibits in this museum is a model of a slave ship, showing how the slaves were kept like sardines under deck, just above other cargo: 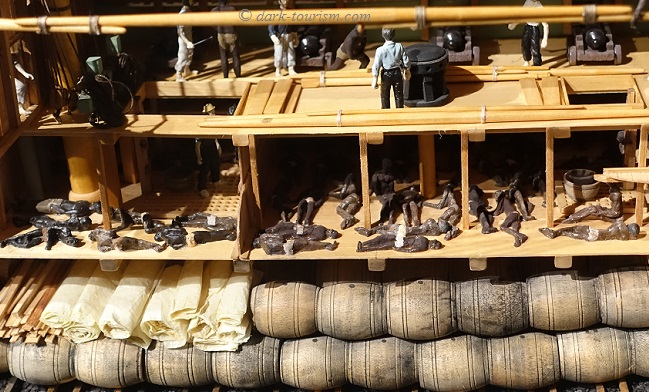 The museum also makes it clear that the issue of slavery is far from over and confined to the history books. It may not be practised as openly as was the case in those 400 years of the Transatlantic Slave Trade, but it does still exist, in the form of human trafficking and extreme exploitation and deprivation of freedom of workers, maids, and so on e.g. in parts of the Arab world.

And of course the legacy of the longest and most systematic human rights abusing trade system in history also lives on, not least in the USA’s long history of racial segregation and repression, which somehow is even seeing a more open renaissance in the form of alt-right white supremacy ideas raising their ugly head again. And of course in the form of police brutality aimed disproportionately at African Americans. And that brings us back to our starting point. I’m intrigued what the news will have to say about BLM protests in the US and elsewhere this evening …