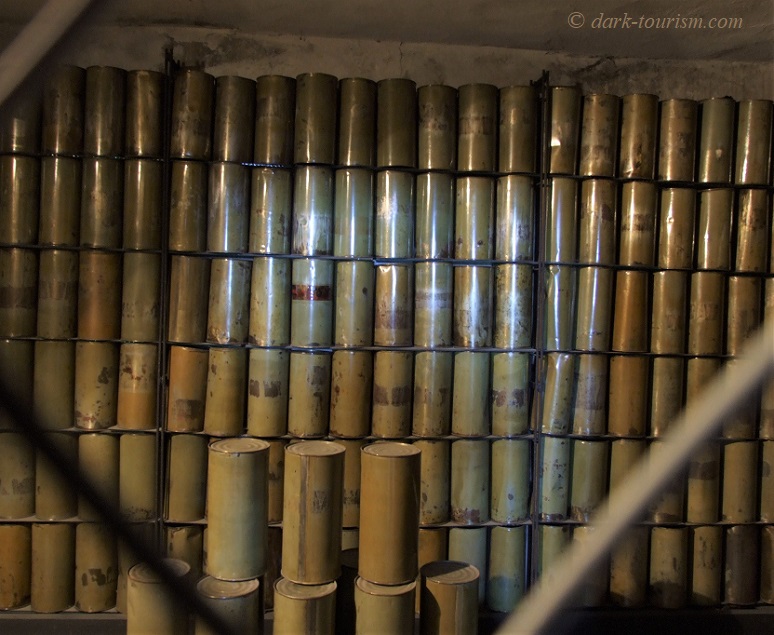 On (or around) this day, 77 years ago, on 23 July 1944, the concentration camp of Majdanek was liberated by the Soviet Red Army. They found only a few hundred weak and ill prisoners left. The rest had already been “evacuated”. The SS retreated with such haste that they didn’t destroy much evidence of their deeds here, so the camp fell into Soviet hands almost completely intact. It was the first large camp to be liberated and thus the first concrete insight into what these Nazi camps were like. Probably as a result of the shock this created, initial estimates of Majdanek’s death toll were vastly inflated. Today a lower total is mostly agreed, of around 80,000. Still, what sets Majdanek apart from all other camps except for Auschwitz is the fact that, like Auschwitz, it fulfilled the dual role of concentration camp (for forced labour) and death camp (for systematic extermination of, mostly, Jews).

I visited the memorial site of Majdanek as part of my first research trip to Poland quite a few years ago, in the spring of 2008. As I got to Lublin, the city to the east of which the camp lies, a wintery spell had covered the region in a rather thick layer of snow. At Majdanek this added an extra dose of eerie atmosphere, as the weather made the rows of barracks look almost black and white, like in historical footage. It also meant that there were hardly any other visitors so for most of the time my wife and I had the former camp all to ourselves, which added further to the unique atmosphere. I also think it enhanced the aesthetics of the photos taken in the open air.

As I shouldn’t overdue it with typing long texts (because of my post-operation left hand) I’ll give you more of a photo essay below, with only minimal text. For more in-depth background I have to refer you to my main website’s chapter about Majdanek.

By the main road leading past the site you find the principal monument, an abstract stone construction of quite large proportions:

From there the area of the former camp extends up a gentle slope. Watchtowers and double barbed-wire fence are still in place. And in the background you can see how close the city of Lublin is:

At the end of the paved road that now runs parallel to the eastern perimeter of the camp is the other large monument here, a dome of concrete over a mound of ash:

Next to this is the former camp crematorium:

Inside the ovens have all been preserved:

In a side room was also a dissection table. The sign in the background (in five languages) explains that this dissection table was used to extract valuables from corpses, such as gold teeth or things they may have swallowed.

The grounds of the actual camp can be entered through a gap in the double fence:

We actually spread our visit to this large site over two days. When we returned after our first day, it had begun snowing again:

Of the ten rows of twelve barracks each that used to house the inmates, two rows have been preserved/reconstructed; here is one of those:

One of the barracks could be entered. Inside are rows of three-tiered bunk beds:

The wintery weather (in late March!) created icicles on the edge of the barracks’ roofs:

In addition to the two rows of barracks in which the inmates slept there is also a row of work and ancillary barracks, including a communal shower room:

Contrary to a surprisingly popular misconception, the shower heads were never used for gassing victims – at some camps the gas chambers were indeed disguised as shower rooms, but the gas was not fed through the shower heads. At Majdanek the shower room was just that, so it was genuine. But the real gas chamber was certainly the grimmest part of the camp memorial today:

At Majdanek both methods of gassing used by the Nazis were employed, through carbon monoxide (like at the death camps of Operation Reinhard) and, like at Auschwitz, through the pesticide Zyklon-B. The blue colouration in the photo above is from that arsenic-containing substance. It came in the form of dry pellets that were poured through the opening in the ceiling and the deadly gas was released on contact with air.

In a storeroom next to the gas chamber there was still a huge stack of Zyklon-B gas canisters. This was perhaps the eeriest and most unique sight to behold at Majdanek (hence the photo below also served as the featured photo at the top of this post):

In another storeroom were thousands and thousands of victims’ shoes amassed in wire mesh “cages”:

I’m currently planning another return trip to Poland later in August (after the already fully planned trip to Riga and Tallinn next week). We’ll stay in Lublin again, primarily as a base for an excursion to the all-new memorial at Sobibor, and also for going to Izbica, Trawniki and Zamość; but if time permits I’d like to go back to Majdanek as well to check if anything major has changed there. If so I’ll report back here (and on my main website, of course).

But so much for now.