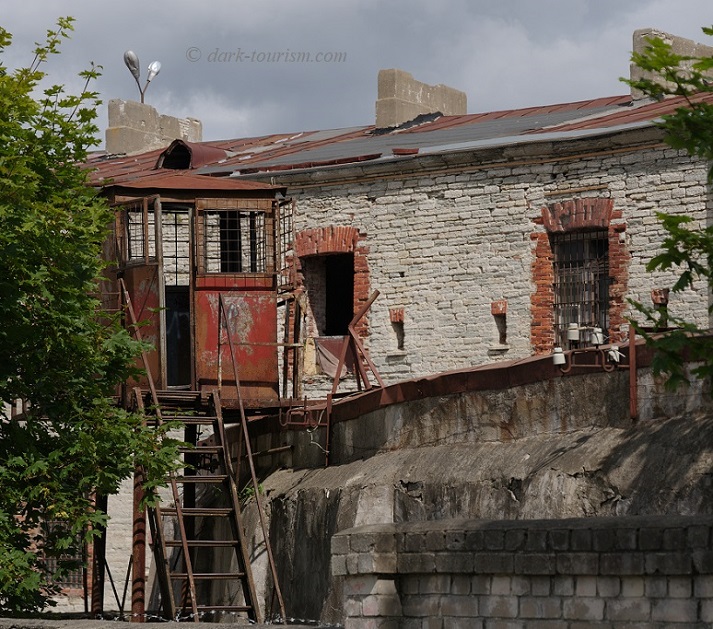 I’ve just finished the last updates on my main website for Tallinn, Estonia. The last significant chapter to go up was this one for Patarei prison, based on my visit to the place at the end of July this year. I already featured a couple of Patarei photos in this general Baltics post on this Blog that I uploaded in August. However, Patarei is such a photogenic place that it really deserves another post of its own. See also the photo gallery on the website. Here I’ll reproduce a couple from that gallery in a somewhat different format and will add several extras not featured on the website, since in contrast to that more encyclopaedic site this blog is frequently more about the visual (rather than about museum narratives).

Consider for instance this atmospheric photo taken at the outdoor “tiger cage” cells – this one featured an artistic representation of a female prisoner:

Inside, the prison became even more photogenic – in that dark way. Like this grim cell tract corridor in the main building:

Also part of the museum is the ground floor of one of the annexes to the old prison building. Inside you can see a number of single-occupancy cells, such as this one:

Upstairs in the main wing the cells were much larger and used to be more communal, with multiple bunk beds like these:

You’d be forgiven if you came to the conclusion from the absence of any people in my shots that I had the place all to myself. In fact, though, nothing could be further from the truth. It was actually really busy when I was there. But I always go to great pains to ensure my shots do not have anybody in them, if at all possible. Sometimes this means having to wait a long time for people to move on.

Along the main corridor were a few guard posts, such as this one:

This one could even be entered, so I assumed the guard’s position to check the view from in there out into the corridor:

One of the most atmospheric shots I manage to get in, I think, is this one of a barred prison window with net curtains (who would ever have expected that inside a prison cell tract!):

Another beautiful image (in that beauty-in-decay sense) of a prison window is this:

This photo, had I already had it, could have been one to feature in the broken-glass themed post from 23 February this year.

Back outside, actually just outside the premises, this is a view of one of the many rusty-metal watchtowers you find at Patarei (same as on the featured photo at the top of this post):

… or maybe this should have been “watchtowers you can still find at Patarei”. That’s because the place is changing. There are some big plans afoot for the future (more about that in a bit), and some changes have already occurred. Consider for instance this photo taken from the road showing the west wing of the complex (the museum is in the east wing):

You can see that the chimney stack on the left is now free-standing in the middle of an empty space. This used to look very different. Compare that with this photo I took back in 2014 during my first visit to Tallinn:

If you look closely at the top of the chimney stack you can also see that it seems to have been repaired. From newer photos I’ve seen I also know that the chimney now bears the letters “Merekindlus”, meaning ‘sea fortress’ in Estonian. This is also the name of the project for the future of the site. This is a twofold project. On the one hand, the museum exhibition in the east wing will be upgraded and expanded to become an “International Museum for the Victims of Communism” (see also Maarjamäe). The website promises, though, that the original cells will be preserved.

However, and on the other hand, the plans for the rest of the large complex have far less to do with preservation. Rather the opposite. The idea is to convert it into a rather commercial mixed-use site with offices/businesses, restaurants, shops, entertainment facilities and apartments and the inner courtyards are to be covered by glass roofs, thus altering the appearance of the ex-prison substantially.

This poster by the entrance to the inner large courtyard (which currently is used by artists and pop-up food stalls) features a glimpse of that future:

They call it “the future is beautiful”, but I find it rather sad that apparently only such a degree of commercialization is considered “beautiful” (you can also get more details from the associated website – external link).

And a lot has been lost in terms of dark-tourism appeal already. Interestingly, you can travel back in time, as it were, by means of the photos you can still find online, such as on Google Maps (see here). In the past, when Patarei was more of an urbexing attraction, you could even see the abandoned hospital of the complex. This is presumably either already gone or will be removed in the course of the commercial conversion. The same will probably apply to the abandoned library that shows up on some photos or to the many examples of artful graffiti. These photos were mostly taken between 2014 and 2017; one from 2021 shows workers in high-vis vests clearing away debris …

Already gone for definite is the system of yet more outdoor “tiger cages” that used to fill the inner courtyard (where the pop-up arty scene is now). These were branching off a central corridor and with a guard walkway above. You can also find some good photos of Patarei as it used to be on the abandonedspaces website (external link).