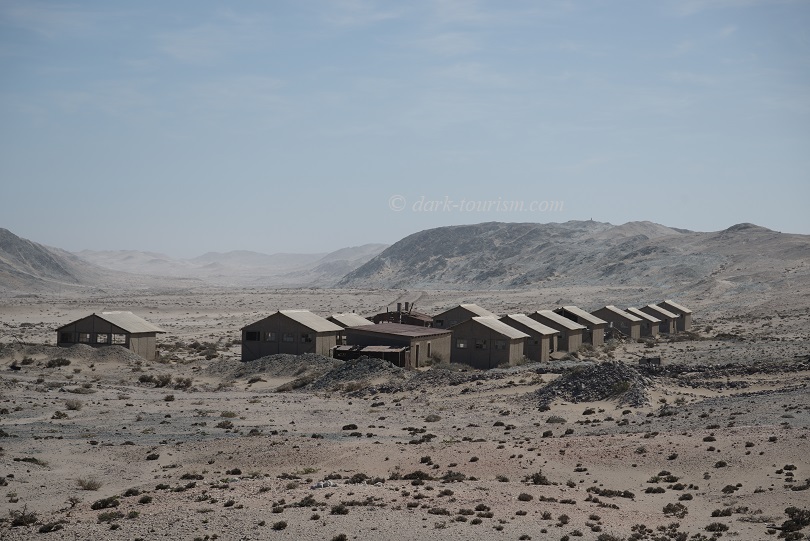 As promised in the previous Blog post about the famous ghost town of Kolmanskop, I now bring you another photo essay about a far less well-known ghost town in the south of Namibia: Pomona.

This desolate place lies deep inside the “Sperrgebiet”, i.e. the ‘forbidden zone’, the restricted-access diamond-mining area stretching from Lüderitz all the way to the Orange River at the border with South Africa. A special permit is required to gain access to this vast area, and plenty of strict rules apply. But there are tours for visitors, conducted by a local operator who has the concession for doing this. You cannot drive to Pomona yourself, you have to be on such a tour. They cost a lot of money, even more so for my wife and myself, because we were the only takers that day. Normally these tours are designed for four participants – so we had to pay extra. But it was an amazing experience and we felt it was well worth the investment.

The key difference to the rather touristy Kolmanskop is that Pomona is anything but. In fact for the entire time we spent with out driver-guide inside the Sperrgebiet, something like seven or eight hours, we never encountered another soul or saw another vehicle. And the drive was a total of 270 km! This is real serious desolation. It truly feels like the end of the world.

At Pomona we were left to our own devices exploring the ghost town, while our guide drove ahead to the old school building where we would later have the lunch that was included in the tour price. And we took our time exploiting the plentiful photo opportunities – without anybody else present. We had the whole place to ourselves. This was just one of the many good photo ops:

Another key difference to Kolmanskop is that at Pomona you get access also to the actual mine and the former diamond processing plant, so there’s an additional industrial element to this sort of urbexing in the desert.

Inside one of the ramshackle buildings a stable metal upper level could be reached for bird’s-eye views and photos:

Lots of machinery could be found, such as rows of sieve tubes for filtering diamonds from the desert sand, or this big machine with a large rusty flywheel:

Of a further such wheel I spotted only a tiny bit poking out of the sand dune that had formed in the interior of another building of the plant:

Outside the processing plant I came across another highly photogenic object lying beautifully in the smooth desert sand: a skull of an oryx, complete with the characteristic horns of these impressive animals:

What a fantastic souvenir this would have made (though how we could possibly have got it back home intact is another question). But of course one element of the Sperrgebiet regulations is that you are not allowed to take anything out of the zone. That applies not only to diamonds or other gemstones, but indeed to everything. But, to be honest, that’s in line with the old urbex ethos: leave nothing but footprints, take nothing but photos. And I think this photo is one of the best I took on the entire Namibia trip.

After the industrial part of Pomona we headed to the former workers’ living quarters lined up in the middle of the desolate desert landscape (same as the featured image at the top of this post):

In rather stark contrast to the more or less luxurious villas that the white German colonialists lived in, the local black workers had to make do with much more limited space and basic amenities. They slept in large communal halls with just a small concrete niche per worker – not a lot of privacy. Today the sleeping quarters are largely filled with sand:

In addition to the sleeping halls there were also a few workshops, such as this one, which may have been a bakery back in the day.

Another difference to Kolmanskop was that the desert sand was not trodden on by hundreds of tourists’ feet but was mostly pristine, as in this long tongue of a dune behind another ramshackle house:

We then walked towards the German part of the ghost town, where the elite used to live back in the day. This is also where this long wooden building could be found, which may have been the community centre or maybe the general store:

The houses in this part stand on the crest of a hill, hence there is much less infiltration of desert sand here, as you can see in this interior shot:

One building had a barred window – but it wasn’t a prison (that stood about a kilometre to the south and I didn’t walk all the way there). I guess this was probably a diamond storage facility.

As in Kolmanskop or Elizabeth Bay, the poshest buildings were those for the upper echelons of the town’s residents, such as the mine director’s or the doctor’s house.

Like so many German colonial towns of the time, Pomona also had a “Kegelbahn” (‘bowling alley’), but unlike the fully restored example at Kolmanskop this one was decidedly dilapidated:

Something that sets Pomona apart from the other ghost towns in the Sperrgebiet that I’ve seen is the fact that it has its own cemetery. This is set back from the town a bit and makes for a truly desolate spot.

But so much for this post – for more background info about Pomona and yet more photos do check out the brand-new chapter for that place on my main website!

And I have yet more up my sleeve in this category – wait and see.