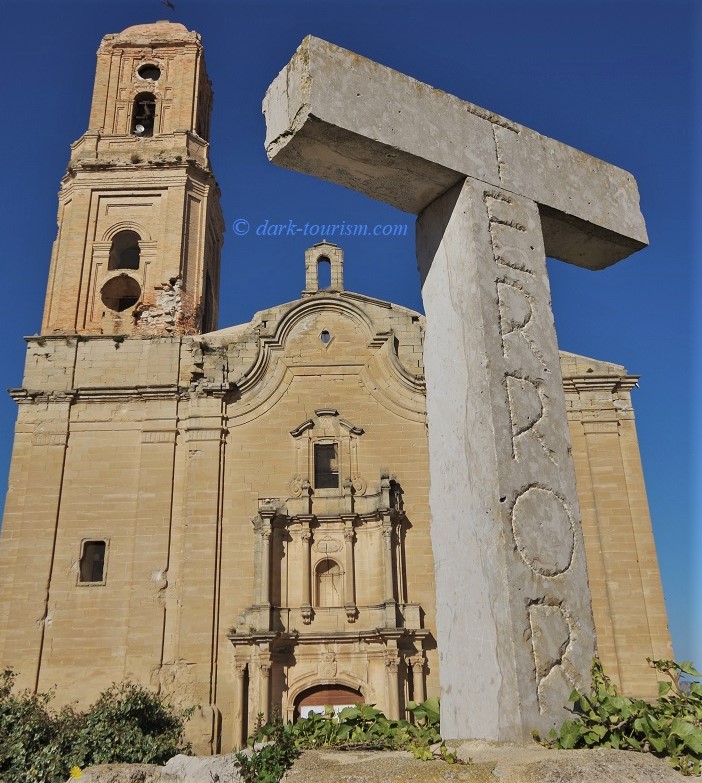 In 2015, just before the 79th anniversary of the outbreak of the conflict, my wife and I went on a trip to Spain and a good part of it was spent studying this topic at some of the authentic locations. So here is a series of photos from that trip.

It began in Barcelona, where we joined a Civil-War-themed walking tour, led by an Irish woman who worked for a local ex-pat British expert on the Spanish Civil War. These tours are aimed primarily at foreign visitors, especially anglophone ones, and have a strong focus on the international involvement, including that of author George Orwell. The photo below was taken on that tour, in the Gothic Quarter of Barcelona. It shows scars from shrapnel that came about in a bombing raid by the Italian Air Force.

Mussolini’s Fascist Italy, like Nazi Germany, sided with Franco and both provided vital support to the Nationalists. So it came that the Italians flew air raids against Barcelona from bases on the Balearic Islands. On one such raid the bombs that created these still visible scars also killed a number of children who were playing in the courtyard outside this church at the time. This caused much outrage, also abroad, and an image of one of the dead children later formed part of this English-language propaganda poster:

If you recognized the line in this poster, that’s probably because you’re familiar with the song of the same name by Welsh rock band Manic Street Preachers. The song was about the Spanish Civil War and especially the participation of the “Internationals”, i.e. foreign volunteers who came to Spain to support the Republican cause.

After Barcelona we went to Zaragoza and from there drove to Belchite, a ghost town that was left in the state of destruction it suffered during the war in 1937. It was on Franco’s orders that Belchite was to serve as a memorial (to propagandistic effect – to the tune of “see, this is what communists do!”).

Walking through Belchite it felt like it had been laid to ruin only recently. You could even see a shell embedded in the side of one of the town’s churches.

The other church ruin in Belchite was even more dramatic, and that’s where I took this next atmospheric photo … I like the way in which the cross atop the church tower is leaning sideways, as if in mourning:

Belchite is not the only ghost town within the former Spanish Civil War battlefields, and not the only one to feature damaged churches either. This photo (same as the featued image at the top of this post) was taken in the similar ghost town of Corbera d’Ebre:

The T-shaped (almost cross-shaped) monument in the foreground was actually rather small (perhaps a metre or so high) … I was just playing with perspective when I took this photo.

The town is in the Ebro region in Catalonia in the north of Spain and this is where the decisive battle in the Civil War was lost by the Republicans. And unlike in most of the rest of Spain, the conflict is much more commemorated here and plenty of Civil War battlefield archaeology was still ongoing. We had a guide, another Brit, who took us around the region. This was serious battlefield tourism and the guide an absolutely enthusiastic expert in this field. In this photo he’s pointing out locations on a battlefield map at a site with some reconstructed trenches and fortifications:

The Battle of the Ebro is also commodified in a host of museums all over the region. One of the slicker modern ones was this one in Corbera d’Ebre:

115 days was the duration of the Battle of the Ebro, by the way, hence the name of this museum, one of the best in the region.

There were also much more amateurish exhibitions, filled with battlefield debris, old guns and whatnot – and mannequins in period clothing or uniforms, including these two rather too red-lip-sticked ones:

At some locations you could also see that the repercussions of the Spanish Civil War are far from over. I had already noticed in Belchite that there were competing right-wing vs. anarchist/communist graffiti. And at this monument at a former lookout of the Francoists, this was also very much in evidence:

The three-day Ebro tour included not only the various monuments and museums, but also plenty of original battle sites, such as this one:

I have to say, though, that after a few days of this I got pretty “trenched out”. But it went further than that: at one point we even worked our way through the thick undergrowth on a hillside to get to the entrance to a cave where some war relics could be found (that’s where I picked up a rifle cartridge that now forms part of my DT souvenirs collection).

The medical side of the war was the topic of another museum in the small town of Batea, where displays included reconstructions of train carriages used as mobile field hospitals:

Speaking of trains used as rolling hospitals, here’s the entrance of a tunnel used by such trains. It is near Fayón in the north-western corner of the Ebro. The river in front is the Ebro, but the bridge that once connected the tunnel to the opposite bank of the river was destroyed in the war and never rebuilt.

In the town of Fayón itself, which is just across the border in the region of Aragon, there was the final war museum of this part of the trip. This one featured the largest number of artefacts, and the very largest ones too, such as this enormous piece of artillery:

I must say, though, that such displays of big guns, tanks and such like – war hardware pornography, as it were – tend to leave me rather cold. The real highlight here was meeting a 99-year-old Republican veteran from the Spanish Civil War! That was something I really would not have expected or even thought possible!

In the photo on the right in the foreground, he’s the guy in the hospital bed, after he was wounded in battle. It was like meeting history face to face!

Much later on this Spain trip we also popped by the most grandiose Franco-era monument, pompously named “Valle de los Caidos” (‘valley of the fallen’), that Franco had erected after the war, using labour by POWs (to add insult to injury, so to speak). Construction of the 150m tall cross and the underground basilica (longer than St Peter’s in the Vatican!) was begun in 1940 and took until 1959 to be completed, in time for Franco celebrating the 20th anniversary of his victory in the Spanish Civil War.

After the dictator’s eventual demise in 1975, his body was also interred here in a marble-plate-topped tomb next to the basilica’s altar. But in October 2019, after a lengthy campaign and long-drawn-out court cases, Franco’s body was finally exhumed and taken to Madrid for reburial.

At the end of the Spain trip in 2015 we headed to the Basque Country, and in particular to Guernica. This town, also spelled “Gernika” in Basque, was infamously one of the first targets of a systematic aerial bombing raid of a civilian town, a precursor to the sheer terror bombings of WWII … and: it was undertaken by the Nazi German Luftwaffe’s “Legion Condor”! This atrocity inspired Pablo Picasso to paint one of his most famous works, the painting also called Guernica. You can see reproductions of it all over modern-day Gernika.

In town there is a Peace Museum that chronicles the 1937 bombing of Guernica and the wider context of the Spanish Civil War. Here’s a photo from the inside, with film footage in the back and reconstructions of bombing detritus in the foreground:

Guernica was rebuilt after the war and today is a fairly pretty Basque town, rather far off the usual tourist trails, and hence rather quiet. But I found it very pleasant.

And we had some fantastic Basque food there. It’s always important to offset dark-tourism activities with nice culinary experiences on these trips!

So much for today then.