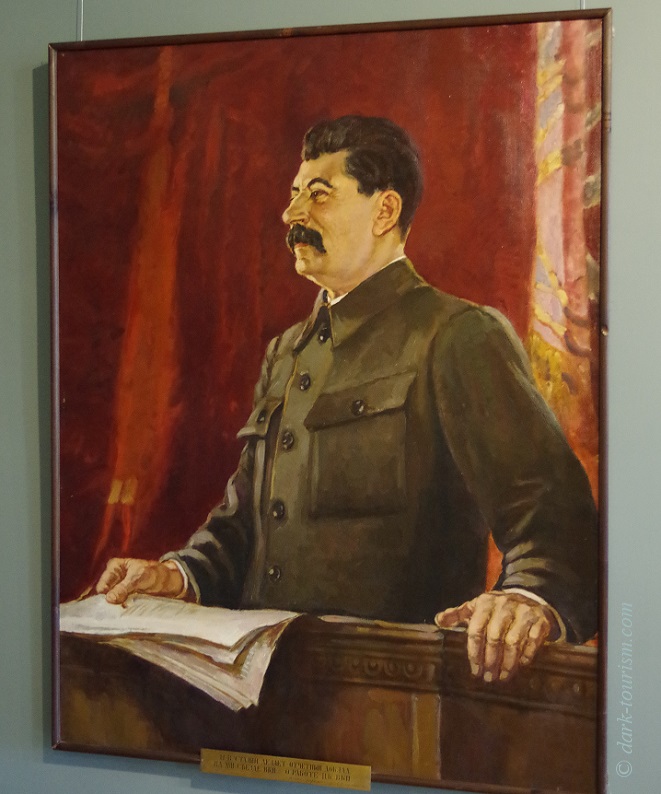 On this Day: on 18 December 1878 a certain Iosep Besarionis dze Dzhugashvili was born in the Caucasus town of Gori in Georgia. This man is of course better known to the world under his self-adopted name: Stalin (meaning Man of Steel).

Aged 15 he joined a seminary to become a priest. And he excelled at writing poetry … Who would have guessed back then that this boy would become one of the most murderous dictators of the 20th century.

But soon after he took control of the Soviet Union following Lenin’s death in 1924, he began an unparalleled series of purges within his party, a ruthless collectivization policy, causing famine and social mayhem, and sent countless political prisoners to the gulags.

Yet he also pushed through an ambitious programme of industrialization (partly thanks to the sudden availability of all those forced labourers).

And when WWII was won, in large parts thanks to the Soviet Red Army, Stalin was the great victor. The cult of personality he engendered was second to none (except perhaps that of the Kims in North Korea or Mao in China).

After Stalin’s death in 1953, his successor Khrushchev embarked on a programme of de-Stalinization, many gulags were closed and German POWs, incarcerated since WWII, were released and allowed to return home. Countless Stalin statues were toppled all over the Eastern Bloc as well.

These days, even though he was responsible for millions of deaths (famous Stalin quote: “one death is a tragedy, a million deaths is a statistic”) in Russia he’s still revered as one of the greatest figures of all time, according to some Russian media polls. So the glorification of Stalin never quite went away completely. And in recent years it has even seen a renaissance.

On my travels in the East, I’ve come across Stalin in images and statuary in various places, and so I can give you a little Stalin-themed photo essay here.

Let’s begin at the beginning, as it were, in Gori, where Stalin was born in Georgia. His modest birth house was enshrined in a grand superstructure and adjacent to it a museum dedicated to him is a weird relic of a continuous Stalin cult of personality.

Outside the museum stands this marble statue of Stalin:

Inside the museum, the glorification of Stalin at times takes on almost comical proportions, such as in this piece featuring a golden mosaic halo surrounding his portrait:

Also at this museum is a hall with a death mask of Stalin’s on a pillow, surrounded by columns and red velvet walls – sombre pomp to the max:

At the museum shop they even sell bottles of wine, a sort that allegedly was Stalin’s favourite (wouldn’t be mine, as it’s semi-dry, i.e. too sweet), featuring a portrait of him on the label:

The museum is not the only place where you encounter Stalin in Gori. The main street is also still called Stalin Avenue, and at the train station another large statue of the man dominates the interior:

Outside Georgia, Stalin is most frequently still encountered in Russia, where there are even several sites entirely devoted to him. In Moscow there’s the Stalin Bunker, which we already encountered in an earlier blog post here on the theme of DT & bars. Here’s a little shrine-like corner inside the bunker with a little bust and plates with portraits of Stalin at different ages:

At the Central Museum of the Armed Forces, also in Moscow, a triumphant-looking Stalin bust overlooks the hall about the victory in WWII (aka Great Patriotic War in Russia):

But Stalin’s presence is not confined to museums and historical sites; at Red Square and the Kremlin I spotted a group of obviously die-hard, old communists nostalgic for the USSR, Lenin and Stalin, parading portraits of the former Soviet heroes around, as if they want to bring it all back. Apparently this group was just returning from a pilgrimage visit to the Lenin Mausoleum:

You may even encounter live Stalins and Lenins – impersonators who dress up as the former heroes to extract money from tourists who want to have their photo taken with them:

The persistent (or revived) cult of personality is also evident in the merchandise sold in the huge souvenir shop at the Museum of the Great Patriotic War at Park Pobedy:

In addition to several Stalins and Lenins you can also spot a few other Soviet/Russian heroes of old here, for example a couple of Dzerhinskys or Gagarins, and if you look very closely you can even spot a Putin!

Some of the Stalin busts look rather cheap, though, such as this one:

I even own a candle Stalin bust, though I can’t quite remember where I got it from. Certainly not Russia, maybe Memento Park in Budapest or the Museum of Communism in Prague.

Still in Moscow, there’s also a Stalin statue that’s not been treated all that reverentially. It’s to be found at the open-air exhibition of fallen communist heroes called Art Muzeon. Note the hacked-off nose on this Stalin:

And in Russia’s second (formerly first) city of St Petersburg I even spotted a Stalin behind bars, namely at the Museum of Political History:

In contrast, this portrait of the man on a wall in the Kirov apartment museum also in St Petersburg is of the classic glorifying sort:

Another classic portrayal of Stalin, in this case in the form of a wall rug (!!), can be found at the rather old-fashioned Panorama Museum in Volgograd, which is about the battle of Stalingrad (the city’s former name until de-Stalinization):

Volgograd also has a rather dodgy Stalin Museum of its own, behind the grand The Motherland Calls monument on Mamayev Hill; and inside you can find this rather badly made Stalin dummy in a mock-up of a study:

The rest of this private museum is stuffed full of Stalin mementoes, images, and whatnot, including this little object:

Outside Russia, in other former Soviet Republics, you can occasionally find Stalin too. One place in particular, Grutas Park in Lithuania, has even become (in)famous under the informal designation “Stalin World” (in allusion to Disney World). Exhibits here include a very rare, ca. 5 metre (16 feet) tall statue of “Uncle Joe” in a classic Napoleon-like pose:

He’s not alone either, amongst countless Lenins, Marxes, Engles’ and local Lithuanian commies are also further Stalins, like this typical bust:

Grutas Park is quite an exception, though. The Baltic States have otherwise tried to erase the Soviet part of their history and normally do not like being reminded of it, especially in Estonia. However, behind the Maarmajäe Museum of Contemporary History in Tallinn, I found a jumble of old statues simply dumped here, and that included this battered Stalin lying on his back on the ground:

Meanwhile I have found out, however, that the statues have been re-erected in a circle in the yard behind the museum. Maybe the worst of post-Soviet iconoclasm is fading?

Going further and leaving the ex-USSR, I also encountered Stalins in non-Soviet former communist states, such as this one in a hall of the House of Terror museum in Budapest, Hungary:

And in Tirana, the capital of Albania, I found this battered pair in the back yard of the National Gallery:

I like reinterpreting statuary. For this I can imagine Lenin saying to Stalin: “Right on, Joe, better do hide that right arm of yours – look what they’ve done to mine!”.

And finally, not all Stalins I’ve encountered on my travels were old items from the Soviet era. This is clearly a newly-made one:

This is to be found at the entrance to the large military open-air museum complex called “Stalin Line”, after some pre-WWII-era fortifications, which played next to no role in the Great Patriotic War, but still … It is in the countryside outside Minsk in Belarus. The complex was opened in 2005 to coincide with the 60th anniversary of the end of the war, so I

presume the bust dates from around then too. Note all those wreaths! There is clearly some reverence still going on here too – but then again, Belarus is frequently regarded as the most Soviet of all the post-Soviet countries …

But so much for another moustachioed big shot with a super dark reputation and legacy (after last week’s Saddam Hussein). Next week I’ll give you a lighter theme: dark tourism & Christmas!