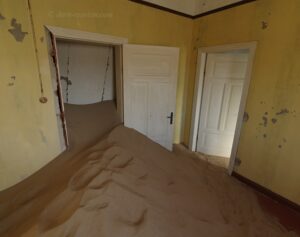 The town owes its existence to diamonds. In 1908, so during the German South-West-Africa colonial era, a railway worker who had previously had a job at Kimberley Mine, South Africa, discovered a diamond while clearing desert sand off a railway track. He showed the find to his German foreman, soon more more diamonds were found and before long a veritable diamond rush ensued. The whole