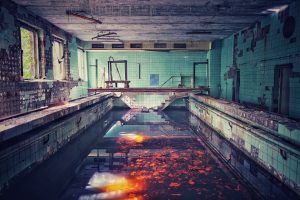 There’s an interesting film out about the so-called “stalkers” of Chernobyl, i.e. those people going there not by the usual tourist route, with a guide and a permit, but who enter the Exclusion Zone independently and illegally. The above photo was taken by one of them (Thierry Vanhuysse) and is part of a press package of the film company, which is where I took it from.
Apparently there’s quite a large scene of Chernobyl stalkers. I know one personally, who also told me that this film is a bit unrepresentative in so far as it only features a certain subtype of stalkers. The majority of stalkers, so I was told, follow an ethos of not banging on about their stalking exploits on blogs or social media, whereas