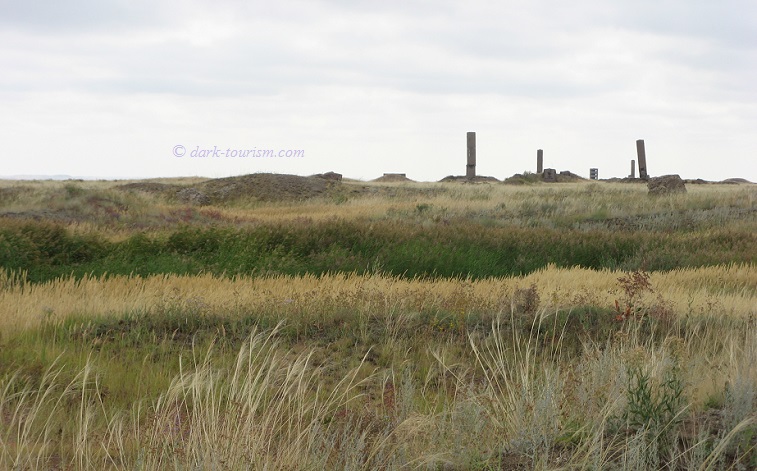 The Nuclear Landscapes of the Polygon, Kazakhstan

A few years ago I had an extended exchange with a guy in Canada who did an intriguing project about the Polygon/Semipalatinsk Test Site (STS) in Kazakhstan, the place where the Soviet Union carried out the majority of its nuclear tests. The project was part of a master’s thesis in Landscape Architecture, at the University of Toronto, and proposed a number of structural “interventions” at the STS, so a kind of commodification for visitors. It was envisioned that the original site could be turned into a kind of open-air museum and/or monumental park of sorts, for ordinary people to visit.

At first I considered this to be a rather outlandish idea, but the more I looked into it the more intriguing it became. None of this has had much of a genuine chance of being realized on the ground, of course, it was more a hypothetical study. But some of the proposed elements would have been pretty interesting. 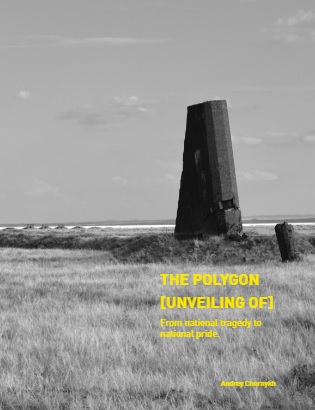 The result of the study, “The Polygon [unveiling of] – from national tragedy to national pride” can be found online here! And an associated item featuring a number of videos shot on the author’s field trips to the STS is available on this website. Take a look for yourself.

My own visit to the STS was part of a longer trip around Kazakhstan in the summer of 2011. My wife and I were travelling with a tour guide and driver in an old VW van originally from the KFOR mission (the NATO-led international peacekeeping force in Kosovo), with no air con, so for us in the back it was like a rolling sauna. But it was a cool adventure and the Semipalatinsk leg was one of the highlights of the trip, indeed a highlight of my entire dark-tourism travel career!

We came via Kurchatov, the “Soviet Los Alamos”, as it were, a formerly closed and secret city specially built for the STS and named after the “father” of the Soviet nuclear programme Igor Kurchatov. The morning after our stay there we simply drove off into the STS. There were no guards, gates or fences back then (security has become markedly tighter since).

Soon enough, some strange objects started to appear on the horizon. These were the old measuring towers and other support structures used in the tests. We got closer and circled round what was the ground zero of Opytnoe Pole, the site where in 1949 the first Soviet nuclear device was detonated, RDS-1 (aka “Joe-1” in the West, after Joseph Stalin, but that was never its official name, as erroneously claimed in the Netflix series “Dark Tourist”). There were more subsequent tests at the same place too, but today it’s overgrown and abandoned. Interestingly, the hollow formed by the explosions is now filled with a lake and green reeds and grass, it’s almost idyllic to look at!

We didn’t get out at this ground zero, but the ambient radiation measured by our driver’s Geiger counter didn’t exceed truly worrying levels. On the photo below you can just about make out the reading: 5.5 μSv/h – not great, but not terrible. 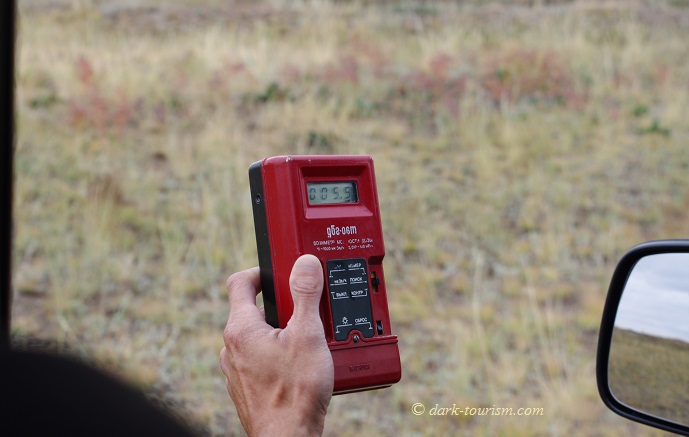 Remember that coiffured war tourist guy in the Netflix series “Dark Tourist”? He actually went into ground zero here shouting out his dosimeter’s readings with glee – though they never went much beyond 13 μSv/h. I’ve measured more than that at some hotspots in Chernobyl.

We then drove towards some of the concrete structures that radiate out from ground zero. One of the measuring towers rather closer to ground zero was completely charred black. 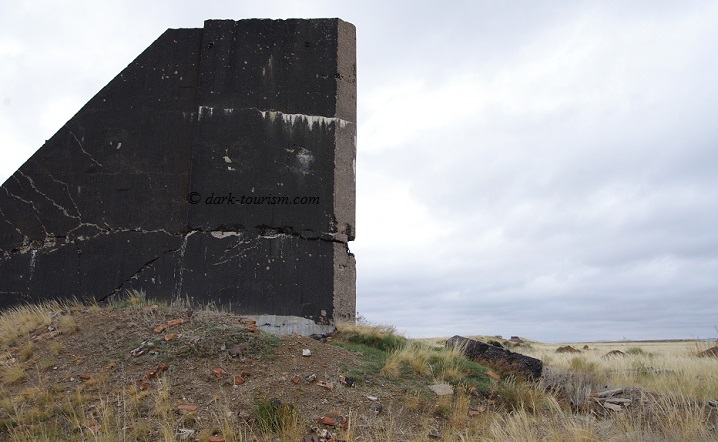 On closer inspection, we discovered that the surface of the concrete had not just been charred, but had actually been partially melted by the intense heat of the nuclear blasts and then had resolidified like hardened lava: 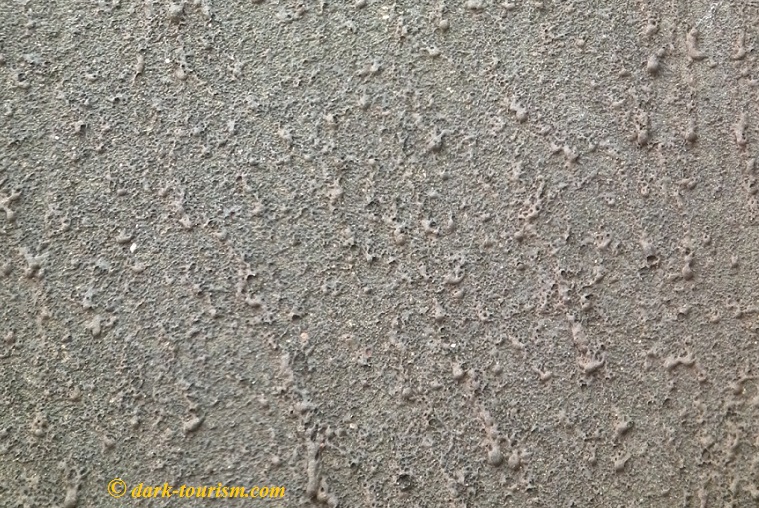 We also got out of the van at a similar tall measuring tower further away from ground zero. This one was not charred and almost intact. My guide insisted on taking a photo of me, because that’s what tourists normally do, so I went along with it (I’m not normally the “selfie-taking type”, though strictly speaking it isn’t a selfie because I didn’t take it myself). As you can see I was wearing a face mask provided by the tour company. It’s of that sort with a filter that’s currently hard to get due to the corona crisis! 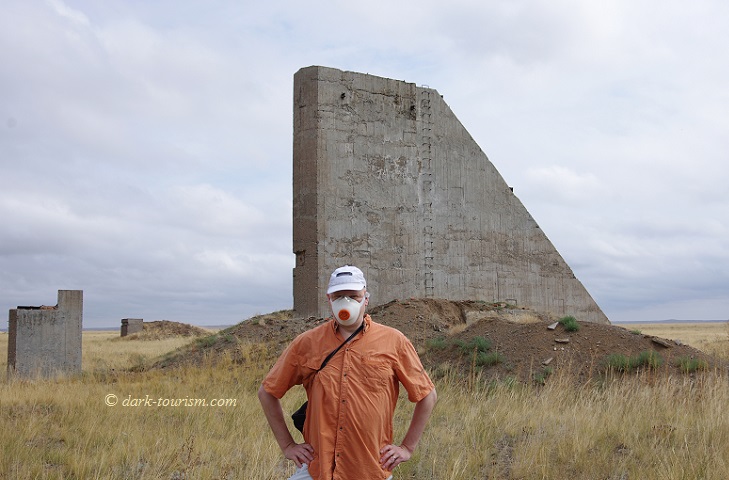 The face mask is of course to prevent you breathing in any irradiated particles. Because while ambient radiation levels are quite low by now, so it’s safe to stay at such structures for a short period of time, ingesting any particles would be a different story, because then they’d continue emitting radiation inside the body.

And to ensure we didn’t pick up any particles on our shoes, we were given plastic wrappers to slip over our shoes as well as cut-down rubber wellington boots to use as overshoes, which made me look a bit like a Diddl Mouse (a German cartoon character): 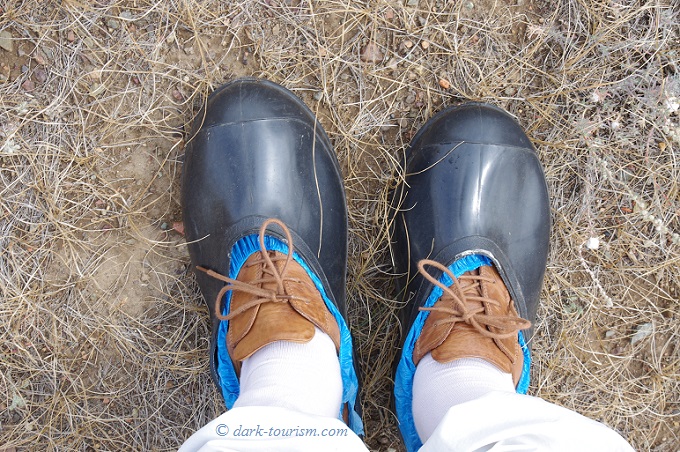 We even poked around inside some of the structures, but did not venture deep, also because the underground level was flooded: 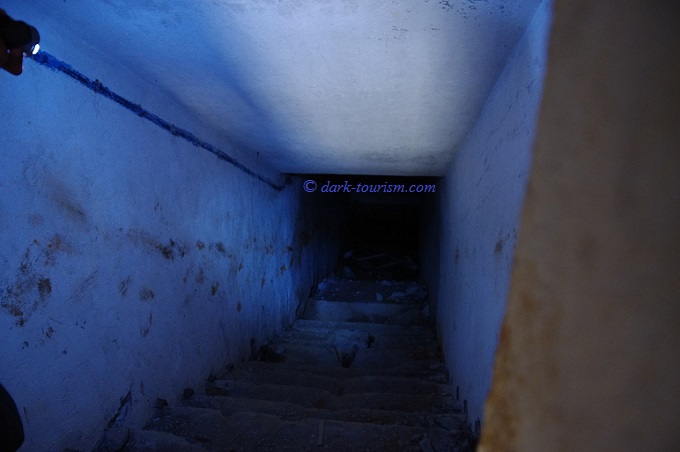 Nearby were some smaller structures, like concrete shark teeth, with steel holders for measuring equipment, set at different angles, probably to study the effects of the blast on differently angled surfaces: 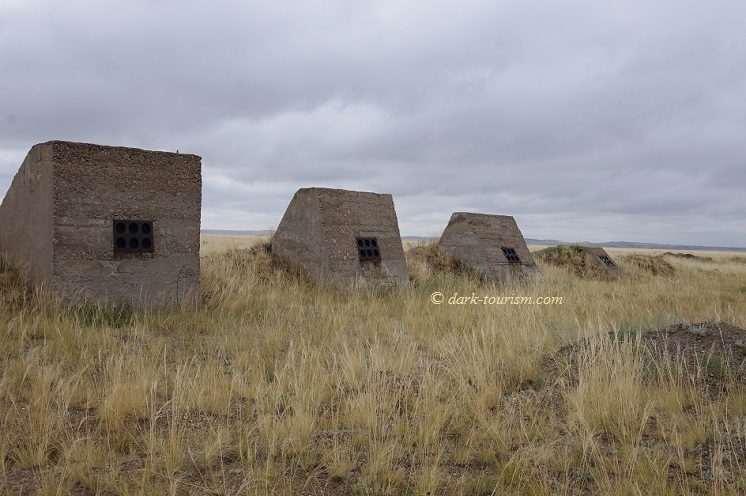 In the distance, yet more, and even larger measuring/observation towers loomed, but as we had to make it all the way to Karkaralinsk (130 miles/200 km away) that same day we sadly didn’t have the time to explore those up closer as well. 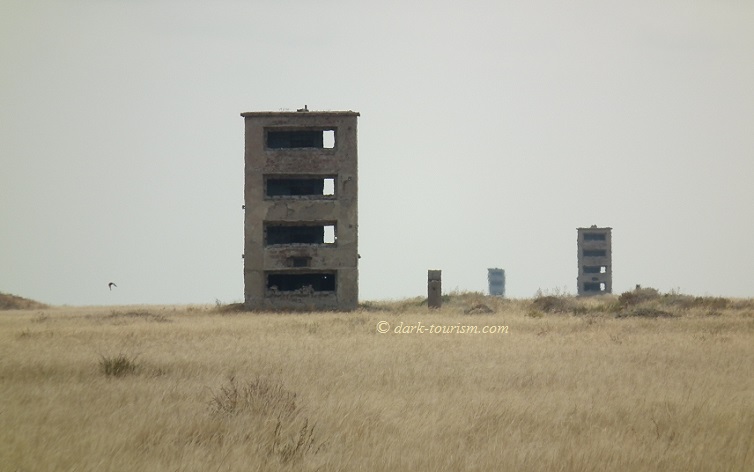 What we also didn’t have time for, unfortunately, is the infamous “Atomic Lake” that has filled the crater blasted out by the Chagan Test. This was a test at using nuclear detonations for the purpose of civil engineering. The “Sedan” Test at the NTS (Nevada Test Site) in the USA was the American equivalent. Both tests showed that while it was possible to shift lots of earth in this way, the ensuing contamination of the soil far outweighed any physical advantages. And so no further such tests were undertaken.

You can see some images of the Chagan Lake as it looks today in Andrey Chernykh’s thesis and the accompanying videos if you follow the links above.