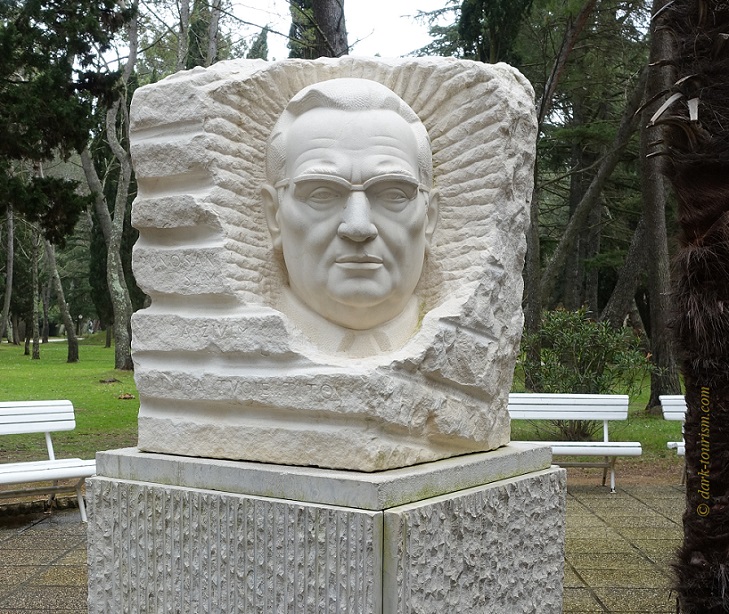 On this day, 41 years ago, on 4 May 1980, Josip Broz Tito died. He had been Yugoslavia’s socialist leader since the end of WWII. Before that he already had a long career in communism, even taking part in the Russian Revolution of 1917 and the subsequent Civil War. He also gathered volunteers for the International Brigades in the Spanish Civil War. At home in Yugoslavia he successfully turned the socialist partisan movement into a force to be reckoned with in its own right, and that without being on the Allies’ side. Nevertheless he and his partisans managed to drive out the Nazis and Fascists (of Germany, Croatia and Italy) and establish a new Yugoslavia by 1945.

Tito famously fell out with Stalin and the Soviet Union and paved the way for the Non-Aligned Movement as a third way, taking neither the Eastern Bloc’s side nor the West’s side during the Cold War. Moreover he somehow held together a multi-ethnic Yugoslav federation, and its citizens enjoyed a lot more freedoms than people in the countries within the Soviet dominated world or other communist states.

He is therefore still often seen as a model of a “benevolent dictator”. Yet, he too had his decidedly dark sides and purged adversaries within the state and established the penal colony island of Goli Otok for political prisoners.

After Tito’s death in 1980 the cracks at the seams of the federation that were already beginning to show in the 1970s, began to deepen, and after the fall of communism all over Eastern Europe in 1989-1991, Yugoslavia fell apart, violently, especially in Croatia and Bosnia. In the end the ex-federation was replaced by a number of new independent states, some of which managed to establish themselves well within Europe (Slovenia, say), while in others tensions and resentment still linger (Bosnia and Herzegovina or Kosovo).

All over the former Yugoslavia, you can find vestiges of the cult of personality that surrounded Tito. Here are a few examples I came across during my travels in those countries. First of all, on this anniversary day, Tito’s tomb has to feature:

As you can see, his is a comparatively modest tomb – very much in contrast to the grand mausoleums where other communist leaders are lying in state, embalmed and in crystal coffins (see Big 4). The location of Tito’s tomb is the so-called House of Flowers, a kind-of winter garden near his former presidential residence in Belgrade, Serbia. The complex also includes a collection of gifts to Tito, specially crafted batons used in the annual 25 May relay races, and other exhibitions. Outside in the grounds of the complex stand statues like this one of Tito in mid heroic stride:

More Tito devotion awaits at the Military Museum in the Kalemegdan Fortress in Belgrade, where Tito’s achievements as a partisan warrior and military leader of Yugoslavia are duly celebrated. Here’s an example of the Tito-related exhibits in the museum, in this case one of the great man’s iconic military coats:

But Tito devotionalism is by no means limited to the former Yugoslav, now Serbian, capital city. You can come across Tito in other parts of the former federation as well. For instance, I spotted this full-on Tito shrine in Skopje, Macedonia (now “North Macedonia”):

Also in Skopje I went to one of those communism-themed restaurants you find in many ex-socialist states, where commie-nostalgia is heavy-handed, even if, to varying degrees, rather tongue-in-cheek. In this particular place Tito predictably played a central role. One example is this large blow-up of a photo of Tito delivering a toast:

Montenegro’s capital city Podgorica (named Titograd during the Yugoslav era) has an art gallery that also features a collection of gifts to Tito (e.g. from Iraq’s Saddam Hussein or Libya’ Colonel Gaddafi). It’s also where I spotted this somewhat unflattering portrait of Tito:

And in Bosnia’s capital Sarajevo I found a bas-relief of Tito on the abandoned and heavily vandalized Vraca WWII monument:

Tito was born in what is today Croatia (back in 1892 it was still part of the Habsburg Empire), and here you find a few special Tito-related sites. For instance, I had a tour that combined a visit to the totally amazing abandoned Željava underground airbase with a visit to an equally abandoned former country residence of Tito’s, Villa Izvor:

This grand mansion was also severely looted and vandalized. As we explored the building my guide pointed out what she said would have been Tito’s private rooms within this large complex. Nowadays it would hardly be suitable for a great statesman …:

Contrasting with this is Tito’s former private summer island of Brioni in the Adriatic Sea. Here, not only his private residence, but also his large guest house have been perfectly retained and refurbished. This grand pile now functions as a hotel:

Brioni today is a tourist attraction, including a zoo, which is the successor of what once was Tito’s private menagerie. And the most unabashed Tito nostalgia is celebrated in the dedicated Tito Museum on the island. By the entrance a bust of the great man that even looked brand new (whether it actually was new, or whether it had just been freshly cleaned and polished, I cannot say), which is also in the featured photo above, now repeated here:

Tito’s car, a 1953 Cadillac “Eldorado”, that he used exclusively for driving around Brioni is now on display outside the museum. It is protected by a perspex “cage” which also features photos of Tito in that car:

Inside the museum is a rather bizarre contrast between a “natural history” exhibition, which consists mainly of taxidermy, including animals that used to be part of Tito’s Brioni menagerie, and the upstairs “J.B. Tito on Brioni” photo exhibition. This includes many a staged propaganda photo, such as this one showing Tito releasing a white peace dove (a stuffed one hung from the ceiling just above this photo on the wall):

Other photos in the exhibition showed Tito with his illustrious guests whom he entertained on Brioni, including not only politicians and monarchs (such as Queen Elizabeth II, Ho Chi Minh, Fidel Castro, Indira Gandhi, Haile Selassie, and so on) but also movie stars such as Sophia Loren or Liz Taylor and Richard Burton (Burton played Tito in a 1973 Yugoslav production about the partisan war during WWII).

The most remarkable photos, I thought, were those in which you can see Tito entertaining, and being entertained, as in this image of then West German Chancellor Willy Brandt giving Tito a light for his cigar … also note the two (!!) full cocktail glasses standing on the table in front of Tito:

Even better I thought was this photo showing Tito with the Soviet leader (between 1964 and 1982) Leonid Brezhnev:

The two look a bit worse for wear after what was probably a heavy drinking session. Brezhnev was known to have been an excessive drinker especially in his latter years, and Tito’s lavish lifestyle was generally legendary. Yet this photo is really not very statesman-like. In it Tito looks like he is about to fall off his chair!

Anyway, with that rather amusing photo I’ll come to a close.