Reason one: on this day, 23 September 2021, my book is already being released in Germany, Austria and Switzerland! Whereas the release date in the UK and the US remains at 26 October. When I saw the date on the German Laurence King website I initially thought it must be a mistake, as I had assumed the October release date was the one to wait for in general. But I was then informed by my contacts at the publishers’ base in London that Germany will indeed be ahead on today’s date. It’s got something to do with marketing-internal affairs I do not fully understand, but apparently it’s quite normal that the release dates of the different branches differ somewhat and about a month apart is as close to simultaneous as they can get.

Anyway, if you’re in one of the three German-speaking countries that LK Verlag ship to you can get your copy now! If you’re in the UK, the US or the rest of the world (served by the US website of LK) you’ll still have to wait a bit over a month longer – but you can of course pre-order already. The prices for the book charged in the UK and the US are the same as on the respective Amazon pages, but at LK Verlag Germany it’s actually a bit cheaper than German Amazon! Obviously you can also order through an independent bookshop rather than online. In fact that would be my preferred choice (also because I don’t want to see independent bookshops being pushed out by online commerce altogether).

The second reason to celebrate is that today it’s my (and my wife’s) 15th wedding anniversary! Back on 23 September 2006 we had quite a spectacular Gothic Wedding, so with a dark colour theme. We and all our guests (and even the registrar!) were mostly wearing black, dark red or purple. We decorated the venue in Gothic style too, had a Gothic wedding cake made, designed a Gothic-coloured meal, and played dark Gothic-y music in the evening. For the show element instead of a traditional ‘first dance’ we had even hired a theatre-prop coffin. Most guests were later having a “test lie” in that coffin. We had a fab time all round and I can truthfully say: it really was the best day of my life! Nine months planning had gone into the spectacle – and a few doses of good luck too. Not least with regard to finding a venue that was conducive to our ideas, namely a former Napoleonic-era fort on the Rame Peninsula in Cornwall, Britain, overlooking the coastline and with a fabulous vaulted main hall, accommodation for a good number of guests, and a fully equipped kitchen for the caterers. On the day we had run out of time for proper rehearsals, but even though some of it was “on the fly” it all went well. Even the unpredictable West Country weather played along: we had a mild sunny afternoon for bubbly and photos on the lawn outside after the actual wedding ceremony. In fact we never had a drop of rain the entire time we were there.

I was thinking about what photos to provide for this blog post. I don’t feel entitled to reproduce photos of the wedding with any guests in the frame, so I can only provide some indications. To begin with, we had two photo shoots prior to the wedding in which we wore goth outfits at Gothic-looking locations. And I later colour-treated the photos and printed some off, which we then used as decoration at the actual wedding venue. Here are a few of those. The first photo shoot was at Fountains Abbey in North Yorkshire (a ruined but still well-preserved former Cistercian monastery), and this is one of the results:

And here’s another, taken inside the extensive vaults at Fountains Abbey:

The other pre-wedding photo shoot was at the Central Cemetery here in Vienna, which also features some beautiful Gothic structures, such as the one that I’m standing in front of (in my goth wedding outfit) in this photo:

And the next photo was taken inside the large church of the cemetery, namely in the crypt:

We hired the venue for three days so we had a whole day before and the morning of the wedding day for preparations and setting up decorations, the lights, the bar and so on, and a whole day afterwards for clearing up. The venue, as already mentioned, was a former military fort from the 19th century. It was sold into private hands in the 1920s and since 1988 has been used as an exclusive wedding venue. We were lucky to get a slot within nine months and only because they’d had a cancellation. Here’s a photo of the outside of the angled structure:

Part of the wedding preparations included conferring with a local wedding cake maker, who came up with this splendid Gothic design:

In a way it was a shame to eat this cake, i.e. destroy this fabulous work of art, but that was a bit of tradition that we adhered to … we were deviating from so many others already. This included not having a classic “first dance”, but instead a bit of show involving that prop coffin we had hired. Four of the younger blokes amongst our guests on cue carried the bride in the coffin through the vaulted hall and deposited it/her at my feet, where my wife then emerged on cue and we put on a bit of a show … and all to some music I had electronically edited for the purpose myself, using all manner of dark-goth musical elements. Here’s a photo of that coffin (with parts of my wife and myself visible in the background during this theatre part): 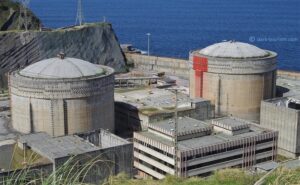 And here comes the fourth and final theme from our most recent poll. In my archives I don’t actually have photos of that many nuclear power plants (NPPs), but included are some of the historically most significant ones – and the darkest! Because of the security issues revolving around the nuclear industry, often photos are only possible from a distance, more or less zoomed in, but I also have some closer up and even a couple of interior