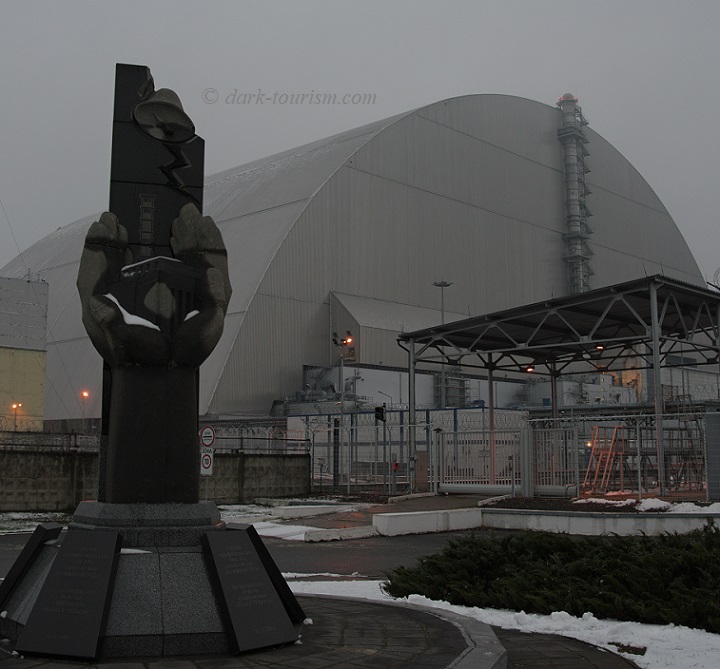 I’ve been struggling for words over these past three days. But slowly they are coming back.

And I thought I just have to speak out in some way rather than just staying silent. So I decided to throw my otherwise self-prescribed political neutrality on this blog overboard and make a statement.

In a way that’s partly because now it’s personal. Putin’s military invasion of Ukraine has, for now at least, robbed the world of dark tourism, my world on this blog and on my main website, of what I consider that world’s No.1 attraction: Chernobyl – it’s been in Russian hands since yesterday. Right now I cannot see tourist visits to Chernobyl resuming any time soon. And that is personal. I had wanted to go back and explore the Zone in even more depth than I have already on my previous three visits there over the years (2006, 2015, 2018). Moreover, I’ve recently given a few interviews (scholarly, not media, so no links) on the topic of Chernobyl and dark tourism and I guess much of what I said about that currently no longer applies. I obviously also feel for the tour operators, in particular the private guide I had used on my last two visits. I’ve tried to contact him but so far have had no reply. I guess he has much more important things to deal with right now.

Don’t get me wrong, I’m not only concerned with Chernobyl and the people there, I feel for all Ukrainians – and also for the normal Russians, who I know from my personal contacts are by no means all behind Putin, very far from it. Some even said they feel shame being Russian right now. There are encouraging gestures in the form of anti-war protests within Russia reported in the media (see e.g. here – external link, opens in a new tab), but given Putin’s grip on his county, I doubt they will change anything in the foreseeable future. There are many protests in much of the rest of the world too – in fact I’ve just come back from an anti-war demo here in Vienna – but they’ll hardly intimidate Putin either.

I also just cannot stay “neutral” with regard to the propaganda adduced by Putin to “justify” his aggression. It’s mainly two words I take grave issue with here, namely “de-Nazification” and “genocide”.

There’s no denying that there are Nazis, or rather: Neo-Nazis, in Ukraine (and that they’ve done some nasty things), yet there are Neo-Nazis also in Poland, Germany, France, the USA and elsewhere, including Russia. Arguably, Ukraine has done way too little to curb the Neo-Nazi issues it has and in fact tolerated too much of it, even in the military, and there have been acts of intimidation and aggression (see e.g. this account, which is slightly dated, but still eye-opening – external link, opens in a new tab).

Again, don’t get me wrong, I have no objections to getting rid of Neo-Nazis, but the point I want to make is this: these Ukrainian Neo-Nazis are still only a minority (an obnoxious one, but still only a minority) and: they’ve never been in power in government in Ukraine. In fact they only have something like 2 per cent of seats in the Ukrainian parliament (compare that to France or Germany!). Most importantly: whatever issues one may have with President Zelenskiy, calling him a Nazi is beyond ludicrous (for crying out loud: he is Jewish!). So declaring a need to take out that non-governing minority of actual Nazis as justification for dismantling a democratically elected non-Nazi government of a sovereign state is illogical.

Likewise Putin’s illogical use of the term “genocide”: How can you, on the one hand, claim that Russians and Ukrainians are basically the same people, or “brothers” (without wanting to get dragged into gender issues, but what about “sisters”?), and then say that whatever alleged “aggression” against a part of that same people constitutes “genocide”. The definition of that term is strict: ‘the (attempted) complete annihilation of “a people”’. If that “people” is the combined Russians and Ukrainians, then that would have to be an auto-genocide (as has in fact happened, namely in Cambodia). But this has evidently at no point ever been happening in Ukraine. To claim that is plainly absurd.

I wish people would stop misusing a term as grave and significant as ‘genocide’. It just shouldn’t be abused for what is clearly nothing but propagandistic posturing. It’s too sacrosanct a term to be open for any propaganda, I’d say.

Right now my hopes are pretty much shattered. Until Wednesday I had honestly and genuinely believed that there still was a peaceful way out of the crisis (I am aware that others called this hope naïve, and I probably was), even if it included letting the two “people’s republics” of Donetsk and Luhansk have their independence (which they wanted anyway); that would have led to a similar situation as with Transnistria, which isn’t perfect but manageable. But with this full-scale invasion of the rest of Ukraine and especially the capital – what now? I see no solution. Absolutely none. Could this even be the end of Ukraine as a sovereign state? Possibly, even though Russia denies that’s its goal. But I cannot see the Ukrainian people simply accepting surrender and “regime change”. There will be resistance. This could turn into a long and nasty bloody conflict.

And what can the West do other than sanctions? Putin himself will not be too inconvenienced by those – they’ll mainly hit ordinary Russians (and the oligarchs and their families can continue their luxury shopping in Dubai and China instead of Europe or the US). Blocking Russia from the Swift system would primarily cause “collateral damage” (e.g. what about ex-pats sending money to support impoverished relatives within Russia?).

And military aid – that’s a dicey issue too.

Let’s not forget that Russia has a vast arsenal of nuclear weapons – and Putin has already made ominous reference to that fact as a warning … see e.g. this address of his (external link, opens in a new tab). It starts our comparatively reasonable, but then launches all that propaganda that I commented on above and then in the fourth quarter of the address adds that cold warning of nuclear weapons. Goodness me! If this war went nuclear it could spell the beginning of the end of the world!

I have to add at this point that I am actually very, very fond of Russia, and, as I said, I personally know Russians who are in no way in agreement with Putin’s moves over the past few years, let alone now. But as to how Putin can actually be stopped, I have no clue. I feel despair and helplessness. How the hell could it have come to this?

Another propaganda line (worryingly shared by China) that it’s all due to US/NATO “aggression” is another one of those logically flawed accusations. True, the eastwards expansion of NATO, especially allowing the former Soviet republics of the Baltics into the club, was indeed a broken promise and in breach of the treaty that brought about Germany’s reunification. But that was many years ago, German Reunification in 1990, the Baltic states’ joining NATO in 2004. So not now! Any line of argument that’s basically saying “but you provoked us … 18 years ago” is hardly going to wash. An angry reaction back then would have been understandable. But using it now doesn’t make sense when calling it “aggression”. Also given that there was no real sign of Ukraine having been on the brink of NATO membership. It’s expressed its aspiration for membership of both the EU and NATO, but that was in no way imminent and calling for intervention. No, the real motivations for Putin must be something else, and something much darker.

But back to dark tourism: in the light of all this I’ve added brief UPDATE notes to several of my website’s Ukraine chapters and also one for Russia, saying that for the time being visits to the places in or near Ukraine covered on my website are not possible or at least not advisable. If this is the beginning of a new Cold War, as some political observers already say, then this could in the longer term also apply to Russia and Belarus. That would be such a shame.

The photo at the top of this post, by the way, is from Chernobyl and shows the New Safe Confinement structure that now shields the first sarcophagus over the old Reactor Block 4 that exploded back in 1986; the photo was taken at dusk on my latest visit to Chernobyl in November 2018.

I also had a look at the photo gallery on my website for the general Russia entry; the final photo, originally taken in a craft beer pub in Yaroslavl, shows a drawing of four Russian bears trotting off in opposite directions and the word “Rossiya” (i.e. ‘Russia’ in Russian) in Cyrillic below. I reproduce it here: