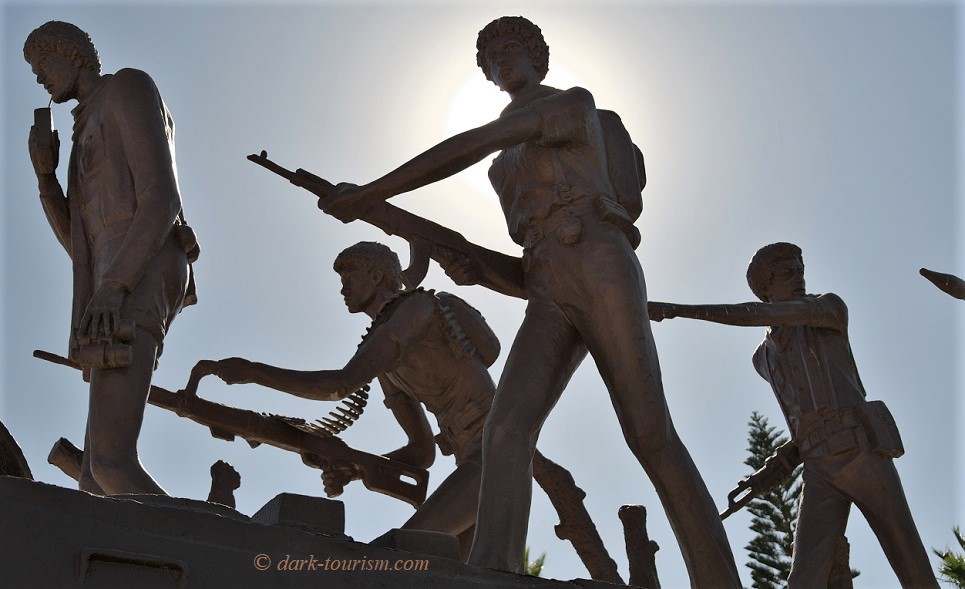 There have been significant developments elsewhere while most of the world’s eyes have been almost exclusively on the US elections and the COVID-19 pandemic. Remember my post from early last month about military conflict breaking out again over Nagorno-Karabakh? It now appears to have ended with a partial victory for Azerbaijan, who’ve retaken the second city of the region, Shushi, or ‘Şuşa’ in Azeri, some territory around it, as well as the former “buffer zone” to the east with the remains of the ghost town of Ağdam. The prime minister of Armenia is reported to have signed a Russia-brokered peace deal that cements these territorial gains/losses in return for an end to the war. Russian peacekeepers are to secure the corridor between Armenia and the remainder of the self-declared independent Republic of Artsakh (i.e. Nagorno-Karabakh to most of us). This deal sparked anger in Armenia and furious mobs stormed the parliament and government buildings, including the PM’s official residence, who they accuse of “betrayal”. In short: it’s an awful mess.

What all this will mean for travel in the region in the longer term is impossible to say at the moment, but it’s very unlikely to be as I found it ten years ago. For illustration, instead of repeating the photos from my previous post about Nagorno-Karabakh, I give you an image of the large Armenian cathedral in Shushi/Şuşa which was extensively refurbished after the 1990s war in the region and which in this new conflict was reported to have been damaged by Azerbaijani shelling.

When my wife and I were there, a wedding was taking place in the church – and we later met the wedding party again at the tank memorial by the road leading up the hill to Shushi/Şuşa. (Visiting war memorials as part of a wedding celebration is an old Soviet tradition that apparently had survived in this ex-Soviet enclave too.)

Clearly happier days they were. I wonder whether that couple are still in Nargono-Karabakh or whether they have joined the many thousands who have fled to Armenia now. I also wonder what will happen to that tank monument. Will it simply be rededicated or just removed?

Anyway, it’s a peace deal (for now), and more peace has to be better than continued killing, although for Nagorno-Karabakh it means less territory. It’ll be interesting to monitor the situation, especially in Armenia where many seem to believe the price paid for peace was too high. So whether it will last is also uncertain.

Even less peace and more war also has to be reported from the country which was the last one I visited before the outbreak of the pandemic: Ethiopia. When I was there it was reasonably calm, though the omnipresence of firearms was a bit disconcerting. In the meantime, the situation in the country has worsened to the point of it being on the brink of full-on civil war.

And that wouldn’t be the first time. In a previous civil war that ended the military dictatorship of the Derg in 1991, a decisive role was played by the Tigray People’s Liberation Front (TPLF). Tigray is the northern province neighbouring Eritrea (which the country also went to war with after it broke away from Ethiopia to become independent again). Its people are one of the many different ethnic groups of Ethiopia’s complexly diverse population. Although constituting only about 6-7% of that population, the Tigray (and the TPLF) have long been a dominant force in Ethiopian politics. When in 2018, after widespread anti-government protests, the new prime minister Abiy Ahmed was appointed, things began to change. First for the better, as Ahmed ended the still simmering conflict with Eritrea – for which he was even awarded the Nobel Peace Prize that year. Last year, however, the TPLF broke away from the government coalition, claiming it was being marginalized, and since then the situation has become increasingly vexed. Key leading figures of the Tigray were imprisoned in the capital Addis Ababa, angering the TPLF, and just a couple of months ago the regional government of Tigray went ahead with elections even though the federal government under Abiy Ahmed had postponed the election due to the pandemic. Over the past week or so, matters have escalated further and there are reports of aerial attacks on Tigray’s capital city Mekele and of fighting on the ground along the border between Tigray and the neighbouring province of Amhara.

What is actually going on at the moment is very hard to tell because the federal government releases very little concrete information and the Tigray region has been cut off from all communications – and supplies (so the spectre of another famine resulting from this conflict is raising its ugly head yet again too). Neither side seem to be willing to negotiate and the rhetoric sounds hardened and bent on war.

Tigray is heavily armed – and its soldiers/militias are well-trained, partly because of Tigray’s role in the recent military conflicts with Eritrea. So all-out civil war could become very bloody indeed. Ethiopia overall has one of the biggest militaries in Africa, and its location on the Horn of Africa, one of the world’s most volatile areas, complicates matters even further, and there are fears of Sudan and Somalia potentially getting drawn into this conflict too. And there are also large military bases of both the USA and China in the small neighbouring country of Djibouti.

But so much for the current affairs issues that made me choose the topics for this post. Our main focus remains dark tourism, so for the rest of this post I give you a few photos from my trip to Ethiopia last December/January, with a focus on the martial side of the country and in particular Mekele, Tigray.

Even without the ongoing pandemic and the restrictions that come with it, I suppose travelling to either Nagorno-Karabakh or Ethiopia, especially Tigray, could not be recommended at the moment, and it’s hard to foresee when, if ever, it may become possible again. The current conflicts are also likely lo leave lasting changes. I’m glad I went to both places when I did.