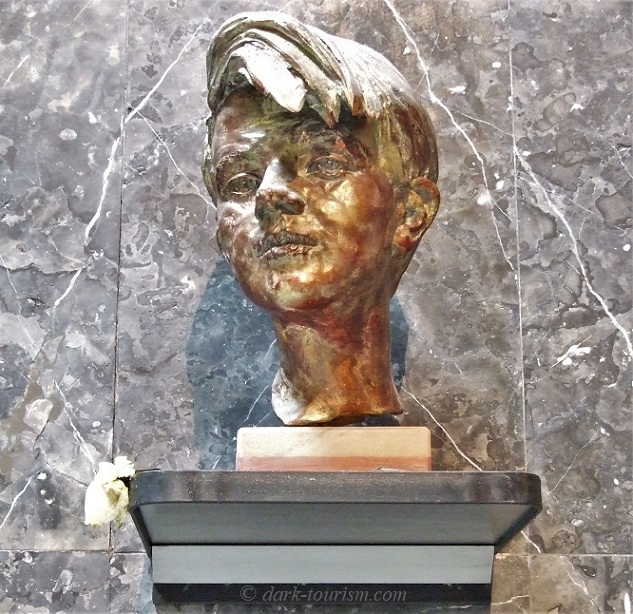 On this day, 78 years ago, on 18 February 1943, two very dark events in Germany’s darkest history coincided on this same day.

One was the arrest of siblings Sophie and Hans Scholl, who as members of the White Rose resistance group at the university of Munich were distributing flyers, in which they harshly criticized the Nazi regime and declared WWII lost for Germany (this was shortly after the Wehrmacht’s defeat at Stalingrad), when they were caught and arrested by the Gestapo.

They were soon put on a show trial presided over by the infamous “judge” Roland Freisler at the “Volksgerichtshof” (literally ‘People’s Court’, but really it should have been called ‘Adolf Court’). Unsurprisingly, Sophie and Hans Scholl were sentenced to death. This was on 22 February and in the afternoon of that same day they were executed at Munich’s Stadelheim prison by beheading, by means of a guillotine.

A copy of the very same flyer they had been caught distributing was however smuggled out of Germany by Helmuth von Moltke, a founding member of the Kreisau Circle (another resistance group). Via Scandinavia, this text found its way to Britain, where it was then reproduced and then airdropped en masse by the RAF over Germany in July 1943.

The White Rose, and especially Sophie Scholl, have attained legendary status by now for their courage and sacrifice. Many a street is named after them, schools too and there are various monuments and plaques. At Munich’s Ludwig Maximilian University, at the very place where the Scholl siblings were caught distributing flyers, this bust honours Sophie Scholl:

The university also houses a memorial centre about the White Rose movement. The first incarnation of this opened in 1997 and was very simple and monolingual, but twenty years later an upgraded, modernized and now bilingual (German and English) new exhibition opened on 18 February 2017, i.e. on the 74th anniversary of the arrest of Sophie Scholl and her brother Hans. This is what it looks like now:

This memorial has the interesting German name “DenkStätte Weiße Rose”. This is a bit of word play on the more conventional “Gedenkstätte” (‘memorial site’), where instead of “gedenken” (‘commemorate’, ‘memorialize’) the verb “denken”, ‘to think’, is being invoked. Obviously this is intended to encourage visitors to go beyond merely remembering and get involved in actively contemplating the issues and principles laid out in the exhibition (key words here are ‘conscience’, ‘human dignity’, ‘freedom’, ‘justice’ and ‘responsibility’).

Outside the entrance to the university, metal copies of the White Rose flyers have been set into the pavement, looking like scattered papers, some bearing images of members of the group. I found that rather effective.

As it happened, the first bit of work I resumed on my website after finishing with the proofs for my book last week, was updating the entry for the DenkStätte Weiße Rose. Do take a look. There are also a few more photos to be seen there.

The other dark event on this same day, 18 February 1943, was a speech by the Nazis’ propaganda minister Joseph Goebbels that is probably the one still most remembered of all his public speeches. It was the “total war” speech at the Sportpalast hall in Berlin. Infamously it culminated in Goebbels asking “Wollt ihr den totalen Krieg?” (‘Do you want total war?’) eliciting an enthusiastic “Ja!” (‘yes’) from the audience of select, devout Nazis. Here’s a historic photo from the event:

The photo was taken from Wikimedia and is licensed under Creative Commons (here’s the source).

Two years ago I used the same image on my then DT page on Facebook. I can only speculate, as no explanations were ever given, but I can imagine that this post may have been one of those that contributed to my stupid purge from Facebook. That’s because this historic photo featured a couple of swastikas, naturally, but FB’s dumb algorithms or overworked and underpaid Filipino censors can’t differentiate between actual neo-Nazi propaganda and a sober discussion of history.

By the way, the slogan in the background of this photo “totaler Krieg – kürzester Krieg” translates as ‘total war – shortest war’, but that turned out to be total nonsense. Indeed WWII raged on for another 27 months after this infamous speech, and it was by far the most destructive phase of the war for Germany. It was precisely what the White Rose and the Kreisau Circle had tried to warn against: that Hitler could not win this war but only prolong it, and eventually drag Germany down with him.

The context for both events is significant: February 1943 was just after Stalingrad – but while the White Rose drew the correct conclusions from that disaster, the Third Reich’s top dogs did the very opposite: upping the madness!

The venue of the infamous speech, the Sportpalast (‘sports palace’) in Berlin Schönefeld, survived the war and continued to be used as a venue not only for sporting events but also concerts. You have to wonder whether the likes of Frank Zappa, Pink Floyd or Jimi Hendrix who played there were aware of the dark history of the place.

This historic photo was also taken from Wikimedia (source here) and shows the building as it was in the mid-1950s. However, in 1973 it was demolished and today there’s a housing estate at this location and only a small plaque commemorates the precursor building at the site.