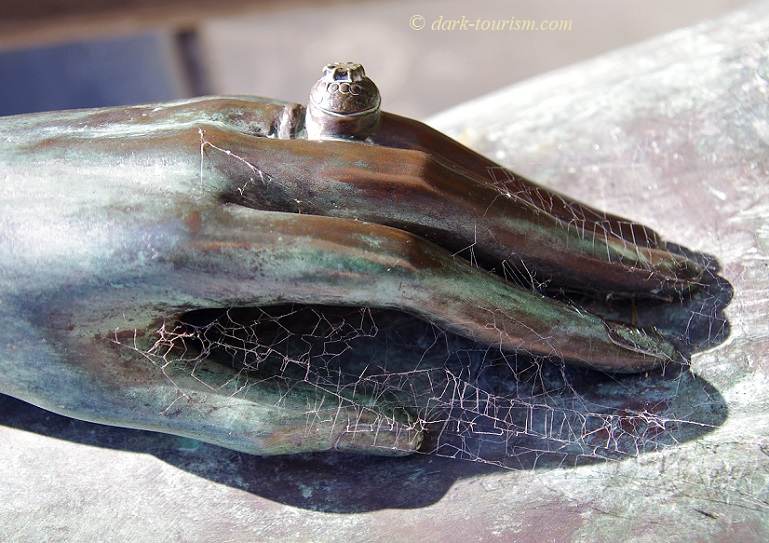 The most recent theme poll didn’t have any winner by last Sunday, but one vote came in late and nudged ‘Hands’ ahead of the other three. So I’ll feature this theme first, but the others will come up here at some later stage as well.

The first photo – featured above – was taken at Recoleta cemetery in Buenos Aires, Argentina, which features plenty of beautiful Gothic elements, but this pretty hand with cobwebs, a detail of a full-body statue, is one of my favourite hand photos of them all! Beautiful and a bit spooky at the same time.

Another favourite is this next one, taken at the fabulous Monumentale cemetery in Milan, Italy, which has some of the most unusual, evocative and atmospheric sepulchral art anywhere. I’ll leave it to your own imagination to interpret this hand incompletely covering this woman’s face …

Next up is another one taken at a cemetery, this time in Belgrade, Serbia. I guess it must have been the grave of a former partisan or at least a staunch communist, going by that clenched revolutionary fist:

Clenched fists feature frequently in references to conflict and ideology, not just in communism, though. Consider this red clenched fist that I spotted in Belfast, evidently in a Unionist/Protestant area:

This photo was taken from a moving car, hence the top-left corner is a bit cut off. The partly hidden acronym at the top is UFF, which stands for “Ulster Freedom Fighters”, the paramilitary wing of the UDA, the “Ulster Defence Association”, during “The Troubles” in Northern Ireland.

Though fighting for the continued union with Great Britain and against the IRA (and its offshoots), the UFF was outlawed as a terrorist organization by the UK in November 1973, so shortly after it was founded. The umbrella organization UDA, founded in 1971, was not classed as a terrorist group until 1992. Its symbol features the Red Hand of Ulster:

The slogan at the bottom is Latin and means something like “who will separate us?”. The origin of that symbol of the red right hand standing for Ulster is a bit disputed, various theories compete and I was told some of those by my guide/driver on my Black Taxi Tour of West Belfast in December 2012. This tour went along the dividing line between Loyalists and Republicans especially along the infamous Shankill Road and Falls Road areas. This image was a recreation on a small sign of what used to be one of the controversial political house murals in this area, this one obviously also on the Protestant side. After the Good Friday Agreement it was eventually regarded as too martial and painted over with something more peaceful, optimistic and celebratory.

And speaking of hands and military action, here’s a photo taken at the Somme 1916 Museum in Albert, France. In one of this WW1 museum’s life-size recreations of war scenes from the Battle of the Somme with dummies I found this rather gory depiction of a hand amputation in a British field hospital:

Also shocking, in a somewhat different way, was finding this the collection of tiny hands preserved in formaldehyde at the Anatomical Museum of Semey (the former Semipalatinsk) in Kazakhstan … I put my own hand in the frame for size reference:

I have no idea why these tiny hands ended up in this jar. There wasn’t any information.

By the way, my hand in the photo above is my left hand – that is: the one I had an operation on, on the ring finger, to be precise, several months ago but that still hasn’t returned to normal. I currently can’t even wear my wedding ring because of that.

I’ve mentioned my problems with that finger here before and just the day before the op I posted a photo of a hand X-ray that I spotted at an abandoned hospital in Pripyat in the Chernobyl Exclusion Zone, Ukraine, and so I repost it here again in this “hands” context:

You may have noticed in the photo with my own hand in it that I was wearing my wedding ring on my left hand, as you do in Britain, even though I’m German. My British wife, on the other hand, wears hers on her right hand, as is customary in Germany (we thought it was a cool “role reversal” of sorts), as you can see in the next photo:

The mould of a much bigger hand is allegedly that of Kazakhstan’s First President Nursultan Nazarbayev. The photo was taken atop the Baiterek Tower, one of the architectural extravagancies in the country’s capital city (then still called Astana, now renamed Nur-Sultan in honour of Nazarbayev). Visitors do indeed queue up to put their hand inside the imprint of Nazarbayev’s hand – which supposedly brings good luck. My wife does have rather slender hands, but still Nazarbayev’s mould looks enormous in contrast. And that’s a bit strange because we found another “Uncle Naz” hand mould on a monument in Almaty, Kazakhstan’s biggest city. And here his hand looks decidedly smaller and more short-fingered:

Nazarbayev was president of Kazakhstan from independence in 1992 to his nominal resignation in 2019 (though he still holds on to other important offices). Before independence he had already led the Kazakh SSR from 1984, i.e. in the USSR. So even though communism had ended the former communist leader simply carried on.

Speaking of communism, hands feature quite often in communist-era monuments too, such as this one involving two giant metal hands cradling a globe:

This monument is part of Memento Park in Budapest, Hungary, a large collection of discarded communist-era statues, bas-reliefs and monuments. At the same site I also spotted this “broken handshake” in a field behind some bigger monument, apparently discarded again and left in the undergrowth next to the actual sculpture park:

Staying with communism and hands, North Korea is of course the most staunchly old-school communist country left on this planet, and home to not only an excessive cult of personality around the ruling Kims (from “Great Leader” Kim Il-sung, via “Dear Leader” Kim Jong-il to current leader Kim Jong-un) but also has a tendency towards massive monumentalism. Here’s a photo of the Workers’ Party Monument in Pyongyang that recreates the party’s symbol, involving a hammer (for workers), sickle (for peasants) and a calligraphy brush (for intellectuals), here held high by giant stone hands:

Turning thus to hands holding things, here is a photo of the hand of our driver holding a dosimeter to measure radiation as we were driving past “ground zero” of the Polygon in the former Semipalatinsk Test Site, Kazakhstan, where the USSR conducted the majority of its nuclear tests:

Next is the hand of our park ranger in the Virunga National Park in Rwanda holding a tiny chameleon:

This was taken on our pilgrimage to Karisoke, where mountain gorilla research pioneer Dian Fossey (of “Gorillas in the Mist” movie fame) had a research station and where she was murdered under mysterious circumstances in 1985. It’s also where she is buried – next to the graves of some of “her” gorillas.

The next photo shows the hand of my guide on a Titanic-themed tour I went on in Belfast (welcome back!) in December 2012, holding two 1912 one penny coins.

What the story is with those two pennies and their family connection to the tragedy of RMS Titanic (intrigued?) you can read in detail here.

The next hand is not holding anything but doing something – namely entering codes in the launch control centre at the Cold-War-era Titan Missile Silo in Arizona USA, an actual ICBM silo turned into a museum site. I was on a private “top to bottom” tour and my guide demonstrated the various procedures the missileers had to go through in the launch sequence. Spooky. Playing World War Three.

These next hands may be familiar to followers of this blog who’ve been with it for a bit over a year, because I posted this image once before:

That was in a post about my August 2020 trip to Venice, where I found this somewhat macabre work of religious art on a church building in a quiet part of town well off the main tourist drag. I presume they are supposed to be the crucified hands of Jesus.

The last but one hand to feature here is this – a dummy hand standing upright amongst blocks of coal and mining gear:

This was deep inside a mountain, namely in the former anthracite coal mine of Ashland in the heart of the coal-mining areas of Pennsylvania, USA. There was a tour inside the mine and at the end of the tunnels was a coal wagon that bizarrely had this hand on it. I have no clue as to its meaning, if there is any.

And to finish this post, here is a photo about absent hands:

These statues of Stalin and Lenin I found dumped semi-hidden behind the National Gallery in Tirana, Albania, where several communist statues and works of art from the socialist era were banished to the back yard. The fact that Lenin’s right arm is broken off and thus the hand gone inspired me to think of a mock caption like this: “Lenin: careful Joseph, hide your hands – look what they’ve done to mine!”, “Stalin: OK!”

And with that I’ll conclude this post. The other poll themes (DT & reflections, DT & furniture and DT & nuclear power stations will come later, over the next few weeks …