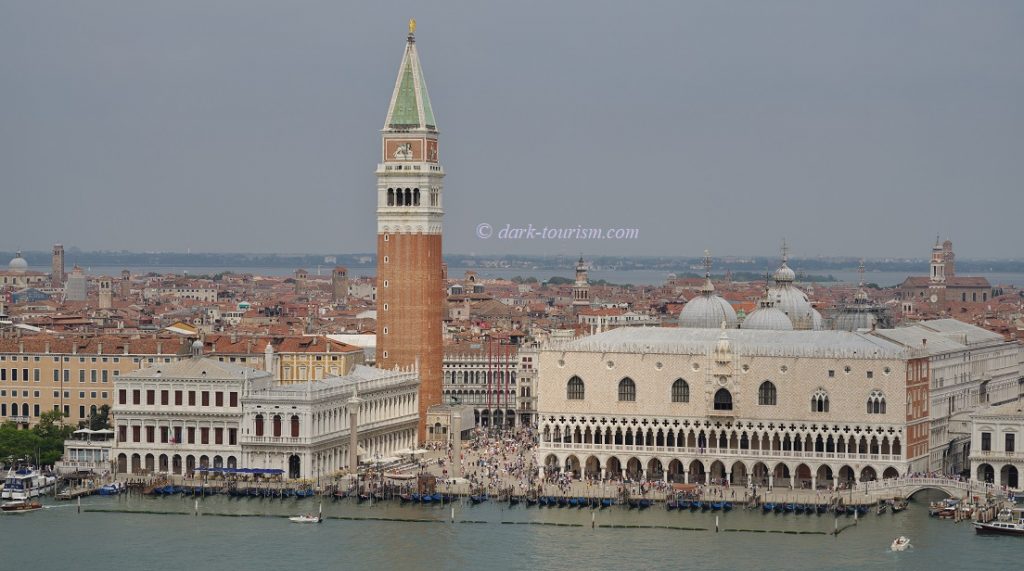 I had a fantastic five days in Venice. Even though it wasn’t exactly empty and devoid of tourists, there was certainly not the degree of ‘overtourism’ that had plagued the city before the pandemic. Without the usual thick throngs of tourists, Venice was indeed much more pleasant to visit now. The main tourist drags between the train station, Rialto and Piazza San Marco were quite busy, too much so for my taste in fact, but still a far cry from the slowly shoving and squeezing masses. It was mostly quite easy to keep a distance. Moreover, I found the Italians very disciplined with regard to wearing masks and using disinfectant, which was supplied everywhere and kept topped up. What a contrast to the blasé Czechs in Brno the week before. Off the main tourist drags, Venice was often enchantingly free of tourists and truly idyllic …

By the way, what the locals think of those horrible monsters of the sea that are those cruise ships was made quite clear by posters such as this that you can see in many a window:

Having had so much more time than the usual day trippers, we explored almost every quarter of the main islands, also visited a couple of outlying islands, and apart from a few boat rides just did a lot of walking, walking, walking. It was lovely and full of cool photo ops (and by that I do not mean the usual selfies at Rialto Bridge etc. that most normal tourists seem to be solely interested in).

The original Venetian food was also inspiring. Forget the globally familiar pizza and pasta dishes, they’re not Venetian and hence not very good here, but go for the local specialities and you’re in for some outstanding treats (I especially loved the orientally influenced sweet-and-sour sardines, ‘sarde in saor’).

While much of the trip was about just enjoying Venice as it is at the moment, wandering about and indulging in culinary delights, there had to be some dark elements too, of course. Venice may not be a top-league dark-tourism destination, but it does have its dark sides as well. The second Italian phrase in this post’s title, “Venezia buia”, means ‘dark Venice’, by the way.

To begin with, for the first three nights we stayed in the old Jewish Ghetto area, in a kosher guest house (as probably the only non-Jewish guests). The Ghetto in Venice is in fact the oldest in the world, having celebrated its 500th anniversary a couple of years ago. It is again home to a Jewish community of a few hundred souls today, but as you will have guessed, it suffered during the Holocaust in WWII. In Italy, Jews were targeted comparatively late, mostly only after Mussolini had been deposed, the new government sided with the Allies and declared war on the Third Reich – which consequently invaded to occupy the northern half of the country in late 1943. And with that the Nazis‘ programme of extermination also reached this part of the world, including Venice.

In the Venetian ghetto today you can find some of those brass markers set into the pavement that you more commonly find in Germany (where they are called “Stoplersteine”, literally ‘stumbling stones’) or Austria (known as “Steine der Erinnerung” there, ‘stones of remembrance’) … note the 1944 dates on these:

Also on the main square of the ghetto, there are several memorial plaques and bas-reliefs, such as these, depicting various gruesome scenes from the Holocaust:

The Jewish museum on the square I gave a miss, though, as I had read that it’s all about the more ancient cultural aspects of the ghetto, not so much the more recent dark ones. I would have liked to see the inside of some of the old synagogues, but that would have required prior arrangements, so I missed out on those.

However, we did make the effort to visit the old Jewish cemetery on the island of Lido, which was a long way to go and when we got there we found the cemetery gate locked (as we had half expected), but I managed to get a couple of photos through the bars, such as this one:

We also took a boat to the general cemetery of Venice, on its own island, and called Cimitero San Michele. The Italians are funny about photography in cemeteries (as well as inside churches). Nominally it is forbidden, but I still managed to sneak in a few clandestine shots. We failed to locate one of the most famous person’s grave here, that of Ezra Pound (US-born modern poet who relocated to Italy in the 1920s and sympathized with and even worked for the fascists – for that he was incarcerated after the war, but on his release returned to Italy and died here in Venice in 1972). But I did find the final resting place of composer Igor Stravinsky at least.

As space comes at a premium in Venice, most ordinary people’s graves are only in use for a certain number of years, after which the plot is vacated for the next deceased one and the remains of the previous occupant are moved to a small compartment in one of the rows of columbaria, such as this one:

Incidentally, since Venice is a city on a lagoon, without roads or cars (except on Lido), funeral services, like almost all others, make use of boats too. On the crossing back to the main island such a ‘boat hearse‘ passed our vaporetto (water bus), complete with a wreath-adorned coffin being carted to San Michele cemetery ….

Cemeteries apart, one rather dark site to go to in Venice is the museum of the historic former insane asylum on San Servolo island south of the main city. Here, some of the more gruesome exhibits include rows of more or less deformed skulls in glass display cabinets, an old dissecting table, and various medical instruments, including for electroshock ‘therapy’, and all manner of restraints, from straightjackets to proper shackles.

One legendary other dark island in the Venice lagoon is the fabled Poveglia, formerly one of Venice’s set of plague islands, later also a mental hospital, and now abandoned and out of bounds to visitors. The island with its enchanted ruins has nonetheless attracted intrepid urban explorers and aficionados of ‘paranormal tourism’, who believe that the “spirits” of the dead are still “haunting” the island. Since I do not share such beliefs in the “paranormal” and also had no inclination of trying to find a boat to take me there illegally, I let Poveglia be …

However, on our way back from Lido we got off at Sant’Elena, the south-eastern-most part of the main island, next to the Biennale area. Here amongst the trees in the park we happened upon a memorial stone marked 11 September 1970 and mentioning the word “tornado”.

Back home I looked this up and indeed: on that fateful date (mostly associated with 2001) an F4 tornado hit this Venetian district causing much destruction and killing about two dozen people, mostly on a ferry boat that capsized and sank within seconds in the strong winds. I hadn’t realized that Italy was prone to tornadoes, but have subsequently found out that this was not an isolated case and not even the strongest ever seen here. Good job I didn’t know this when on our last afternoon a huge thunderstorm brewed over Venice and we had to take shelter in a trattoria by the lagoon front for almost two hours (any excuse will do for that, but this was a more serious one than I had realized).

Besides all this, Italy being Catholic also provided for several dark details … in the decoration of churches, for instance. Amongst many such things I spotted this skull and pair of arms/hands (with holes from crucifixion nails!).

Another kind-of darkish sight to see is the atmospherically flooded crypt underneath San Zaccaria church not far from the lagoon front and Piazza San Marco.

Finally, inside San Giorgio Maggioro church (from whose campanile you get the glorious view you see in the lead photo at the top of this post) I found yet more examples of Catholic depictions of cruelty in stucco, paintings or wood carving. One such wood carving bears this scene, which kind of puzzled me. What’s this supposed to be? A dog about to be slaughtered for sacrificial reasons? Or is there a Biblical connection I am unaware of? If anybody can enlighten me, I’d be much obliged …

So much for Venice. I also announced that I’d have another poll about themes for future posts. So here we go: A new poll. Again I’ll give you a choice of four themes. Last time‘s runner-up is fielded again, together with three new ones. Please vote by either posting a comment here or by replying to the latest newsletter email (and if you haven’t subscribed to the newsletter yet, now is a good time to rectify that – see the box in the top right corner of this page!).

Here are the four choices:

a) dark tourism and ash

b) dark tourism and flames

Please cast your votes over the coming seven days, so that I can announce the winner next Sunday.