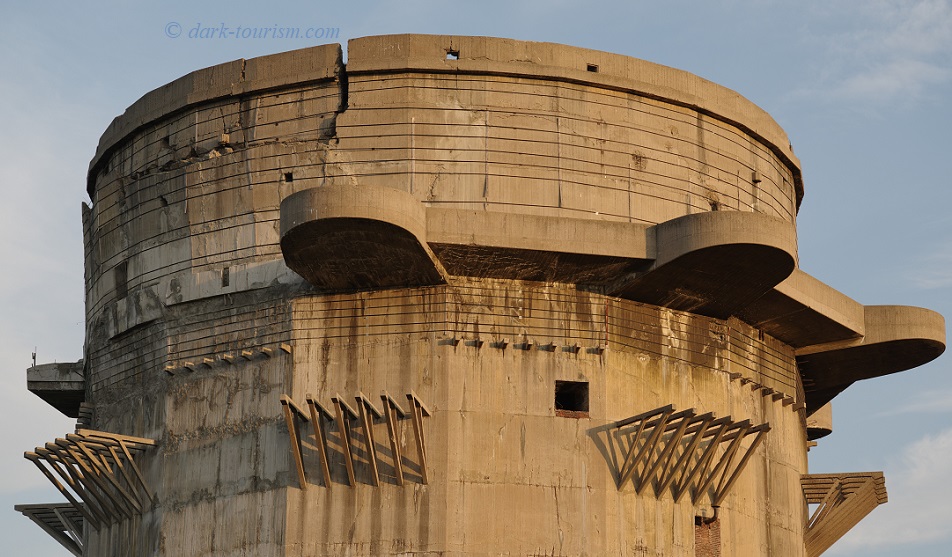 Another post, this time mainly to a) show you some cool new photos I took this week, and b) to bring up a new poll in which you can vote for a theme in a new post.

As already set out in today’s Newsletter as well (hint for those readers who haven’t yet signed up for it – please do so by going to the top right-hand box, enter your email and click ‘subscribe’), the four choices in this new poll are the following:

The first choice was the runner-up last time that we had such a poll (when DT & villas won), so it’s entered for a second chance here once more. Please cast your vote by leaving a comment in the box below this post. (Subscribers can also vote by replying to that latest Newsletter.) The result will be revealed next Sunday.

But now to the photos. In the course of editing the proofs for my book, I saw that I could do with a better photo of one the sites covered that I actually happen to live very close to. I’m talking about the fabled Flaktürme, or ‘flak towers’, in Vienna’s Augarten park. In case you don’t know, “Flak” is short for “Flugabwehrkanone”, or ‘anti-aircraft gun’, and these towers were constructed to house batteries of big guns of that type during WWII. They were each complemented by another tower for radar/aiming technology. Hence the main towers were called “Gefechstturm” (‘combat tower’), while the smaller secondary tower was called “Leitturm” (‘directing tower’ or ‘lead tower’). Thus these installations always came in pairs. On the lower floors they additionally provided much needed air-raid-shelter space for civilians. But in their main military purpose, as a defence against increasing Allied bombing raids, they proved rather inefficient.

Eight pairs in total were built, three in Vienna, three in Berlin, and two in Hamburg. The ones in Berlin were all destroyed after the war, in Hamburg the Leittürme were demolished, and the Gefechsttürme converted to other uses. In Vienna, some towers have also found other uses (e.g. as a city zoo/aquarium), one even still is a government emergency bunker (and hence inaccessible to normal civilians), but the two most visually stunning ones are to be found in Augarten and these are derelict and abandoned (except by thousands of pigeons that find shelter and nest in there).

Here is an old photo of the smaller Leitturm:

You can make out some war damage from a shell that hit the top of the tower, presumably during the Battle of Vienna in 1945 as the Soviet Red Army conquered the city; here’s a zoomed in photo of the top:

When I had my previous dSLR new (a Pentax K-50) in 2013, I went into Augarten, (which is only three blocks from the flat I live in) for a test shooting session, to run the camera through its paces as it were, testing all manner of settings and special functions, including for the first time the option of double exposures (where the camera basically merges two separate shots into one – a function I haven’t seen much use for since); here’s an example:

But for my book I needed a good-quality new shot of the other, bigger tower, the Gefechsturm. I had noted that the best time for photographing the tower from the angle I wanted it to be seen from was in the evening shortly before sunset, so coinciding with what in photography is often called “the golden hour”. Last Monday was a pleasant clear day, so in the late afternoon I packed up my tripod and my current camera, now a pro-level full-frame dSLR (a Pentax K-1 limited edition) and headed off into Augarten. I set up my tripod at a good spot I had scouted out the day before and began taking pictures. As the sun dipped lower, the light got better and better, and this is one of the shots I took then:

How that crack came about is somewhat unclear, though a frequently quoted story goes that it was from an explosion of left-behind ammunition that detonated after kids playing in there must have set off a fire or so. That was after the war in any case, so unlike the damage to the Leitturm, this is not evidence of battle action. Originally, one of the platforms for smaller anti-aircraft guns that ring the tower below the top level (its “ears”, as it were) was dangling at an alarming angle underneath the big crack. But about twelve years ago or so, this was removed for safety reasons, before it could fall off and hurt anybody. As you can see, the tower has also been secured by means of steel ropes going all around it, in the hope of holding in any loose concrete.

Finally here’s a shot of the tower that I took a bit earlier that afternoon. This shows the tower from an angle where you can’t see the crack, but the tower appears more complete, with all “ears” visible from this vantage point. Moreover you can see the graffito at the bottom that says “NEVER AGAIN”:

The graffito is obviously an allusion to the tower’s status as a Nazi heritage relic and possibly also to the fact that the towers were constructed with the use of forced labour. There is no official commodification here, no plaque giving information about these big concrete monsters. At one point such a plaque appeared, through a private initiative apparently. But that was soon taken down (presumably by the authorities, who didn’t want to see their job being done by somebody else). The “never again” legend has been there for a while, though. But not continuously. At one point it was covered over with black paint (there’s a political context here, too, but I’ll spare you the details), but before long it was re-painted on that black canvas and has been left there to this day.

What’s to happen with these abandoned towers remains open, there have been suggestions ranging from using them as vaults for the storage of data to demolishing them (in that typical iconoclastic way of dealing with the past). But for now, they just remain standing and nothing tells uninitiated passers-by what these big things, which are impossible not to notice, really are. That said, though, in the Leitturm that houses the “Haus des Meeres” (‘house of the sea’) aquarium, a small add-on exhibition about these bunkers’ history has been set up. I haven’t seen it yet, as it has extremely limited opening hours. But once I have been I’ll make that a separate post here.

So much for now. Don’t forget to vote in the current poll for a new themed post by leaving a comment with your choice below:

a) DT and cars

b) DT and spheres