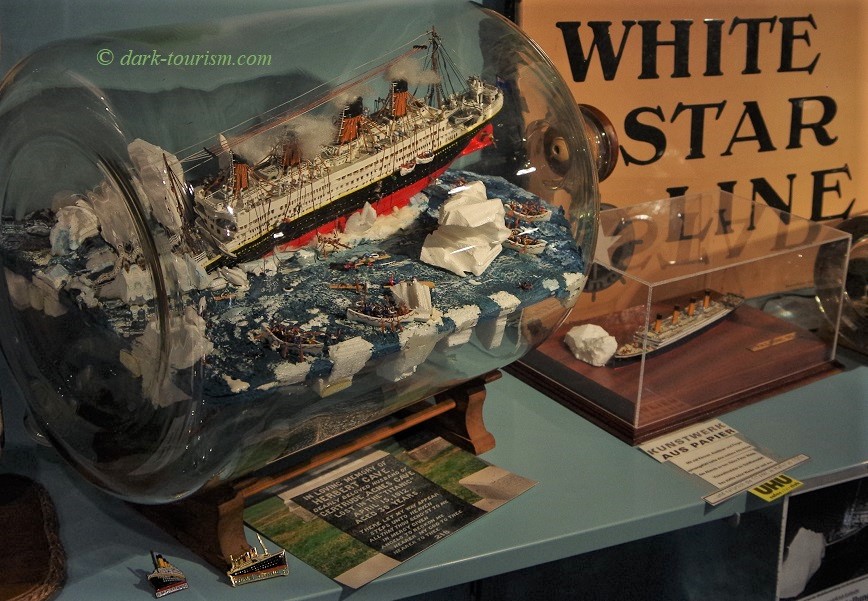 In the early hours of this day 109 years ago, 15 April 1912, the RMS Titanic, the then largest ship afloat, sank off the coast of Newfoundland, Canada, following a collision with an iceberg at 11.40 p.m on 14 April. A bit over two and a half hours later she went under. Over 1500 people perished, only ca. 700 survived. It was one of the first big disasters to trigger a worldwide media frenzy. Later a number of movies, culminating in James Cameron’s lavish 1997 version simply called “Titanic”, reinforced the tragedy’s legendary status. You can say it’s the “mother of all shipwrecks”!

The actual wreck is lying so deep on the ocean floor that it took a long time for it to even be discovered. The images shot on dives have become the stuff of legends. For a while it was even possible for (very) well-heeled paying tourists to go on dives to the actual wreck themselves (for prices that most of us could not even dream of ever being able to afford). In a way it’s the ultimate in dark tourism!

And the various dives to the wreck that salvaged objects from it spawned various exhibitions, both travelling and permanent ones, that display some of these items. There are even two replica “Titanics” serving as museums, both somewhat ironically in landlocked states in the USA (Tennessee and Missouri, respectively).

I haven’t been to either of those (let alone the real thing), but I’ve seen various exhibitions (in Southampton, Hamburg, etc.), and most importantly in December 2012 I went to Belfast, the city where the Titanic and her sister ships had been built at the Harland & Wolff shipyard. It was of course the year of the centenary of the disaster, and that gave rise to a whole bunch of new touristified sites on the Titanic theme. The core of it all, the so-called “Titanic Belfast Experience”, was brand new then, but it was already becoming Northern Ireland’s No. 1 tourist attraction. This photo shows the iconic building (recalling ships’ bows) on the left, and on the right you see one of the famous gantry cranes of the Harland & Wolff shipyard, known as Samson and Goliath:

The whole area of the shipyards is now designated “Titanic Quarter”, and it includes the slipways where the Titanic and Olympic were built. The outlines of the ships are now marked with lines set into the pavement, and at night they are illuminated by LED lights:

This is just behind the Titanic Belfast Experience. Inside the “museum” (they don’t actually like to be called that, they insist on that buzzword “experience”) is a huge, super-modern and detailed exhibition, with lots of projections as well as interactive and even walk-through elements. One highlight is a room with floor-to-ceiling projections on all sides simulating a “lift” ride through all the decks of the ship, from bottom to top (bridge). Another is an actual physical ride (in little fun-fair like remote-controlled cars) through a large, virtually life-size replica installation of a part of the shipyards, which is where this photo was taken:

Nearby is also the old Thompson Graving Dock, back then the largest dry dock in the world, and the place where the Titanic was outfitted:

Other authentic locations associated with the Titanic are Southampton, England, where the ship’s maiden voyage began and Cherbourg in France, where the ship called to take on board more passengers from continental Europe. At the place where the Cherbourg terminal for the White Star Line ships like Titanic used to be is now the Cité de la Mer maritime museum and this includes a Titanic exhibition. In this you can amongst other things find this recreation of a first-class cabin with an evening dress draped over the bed. The lighting is supposed to emulate the blue ocean into which the ship then disappeared …

Another place associated with the sinking of the Titanic is Halifax, Canada, the port city closest to the co-ordinates of where the ship went down off the coast of Newfoundland. After the survivors who had been picked up by the Carpathia had been taken ashore, Halifax sent out four vessels with the task of retrieving the bodies of those who had perished. Only just over 300 were found and some 200 of those were buried in Halifax, mostly at Fairview Lawn Cemetery. This photo, taken there, ties in with last week’s Dark Tourism & Toys post, as it, too, shows toys and fluffy animals left as mementoes by visitors:

By the way, the cemetery includes the grave of a certain J. Dawson, and since James Cameron’s “Titanic” movie this particular gravestone has seen particular attention and more flowers and mementoes left at it by visitors than at any of the other graves of Titanic victims. That is of course because people take this to stand for Jack Dawson, one of the lead characters of the movie, played by Leonardo DiCaprio. The only problem is that his character was entirely fictional and the gravestone belongs to somebody else, namely a Joseph Dawson.

You can also encounter the Titanic elsewhere, at places that have absolutely nothing to do with it. Here’s an example, a scale-model Titanic advertising “Titanic – The Artefacts Exhibition” at the Luxor Hotel in Las Vegas, USA, in the year 2012:

Models of the Titanic are of course numerous. One of the most endearing ones I’ve ever seen, also pictured in the lead photo at the top of this post and repeated here, is this Titanic model in a bottle, depicting the sinking in minute detail complete with lifeboats, smoke and icebergs, seen at the Shipwreck Museum in Cuxhaven, Germany:

Indirectly related to the Titanic is this dining room, which was furnished with the interior wooden panels and columns as well as mirrors from the first-class lounge on Titanic’s sister ship, RMS Olympic, which were bought at auction when that ship was decommissioned and scrapped in the late 1930s. It still fulfils the role of a dining room, now at the White Swan Hotel in Alnwick, Northumberland, Great Britain:

And finally, speaking of dining, my wife and I marked yesterday’s “last supper” aboard the Titanic by a special home-cooked dinner using recipes from a Titanic cookbook I had purchased at the Titanic Belfast Experience’s gift shop. We even dressed up for the occasion … (but no photos of that here – I would have posted some on my private Facebook page if I hadn’t been robbed of it, so I’ll leave it to my wife to do the Facebook posting …)

[Note that the first three paragraphs of this post were adapted from a post exactly one year ago that I had put on my ex-Facebook page shortly before it was purged, now lifted from my archive of posts I used to have on that evil platform.]