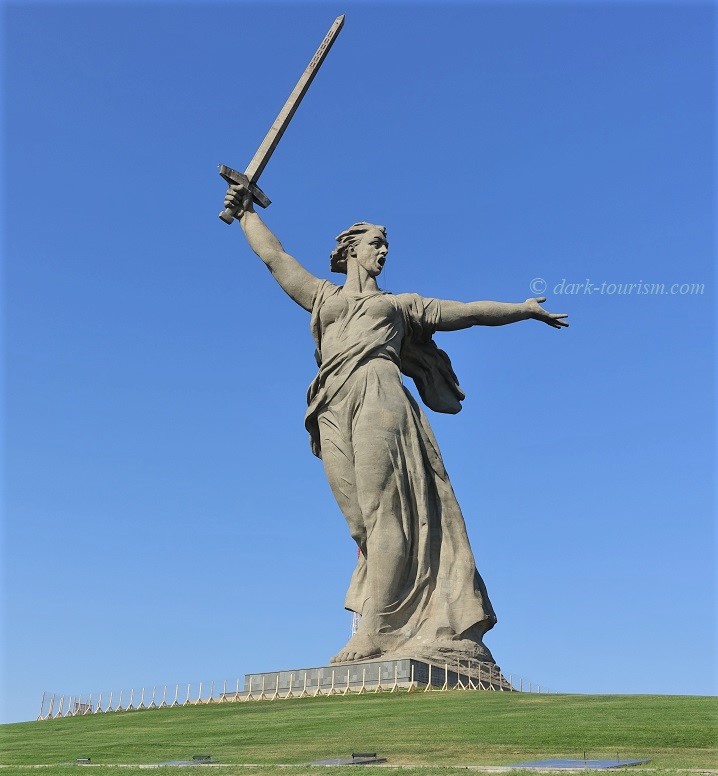 On this day it’s International Women’s Day, so I’m marking this by posting some photos of really big women sculptures. Above is the very biggest of them all, the largest female statue ever built. This is the Rodina Mat, aka “The Motherland Calls”, statue on Mamayev Hill in Volgograd, Russia. She’s the central part of the memorial complex for the Battle of Stalingrad. This is Soviet monumentalism at its most monumental! The figure is 52m tall from head to toe, with sword even 85m. At the time of the completion of the complex in 1962 she was the very biggest statue in the world. Several bigger newer Buddhas especially in China have meanwhile overtaken her in size, but she’s still the tallest female figure.

Not far behind, size-wise, is another Rodina Mat, the titanium-clad equivalent in Ukraine’s capital Kiev at 62m tall (including the sword, with plinth over 100m!):

This shiny, silvery, but also sterner-looking Rodina Mat, or Motherland Monument (Батьківщина-Мати in Ukrainian), is quite a bit younger than her Volgograd sister. The statue and the memorial complex around it were inaugurated in 1981, in the Brezhnev era. At the time the commemoration of WWII, also in the museum underneath the statue, still used the usual term in the USSR: “Great Patriotic War”. More recently, however, independent Ukraine, partly as a result of its ongoing conflict with Russia, has embarked on a “decommunization” programme which outlaws Soviet symbols and expressions. So the museum’s name was changed to “National Museum of the History of Ukraine in the Second World War”. The Soviet symbol on Rodina Mat’s shield has to my knowledge so far survived this new Ukrainian iconoclasm. And I hope that remains so. There have even been calls to pull her down altogether, which would be a gigantic shame indeed. Let’s hope she can stay …

These war-memorial female statues are not the only big women in statuary in the former USSR. The former Soviet republic of Georgia in the Caucasus has this Mother Georgia statue overlooking its capital city Tbilisi:

Another silver giant lady, this one holds up a cup of wine instead of a shield, fitting for the oldest wine-making country in the world that is also renowned for its hospitality. Yet the sword still symbolizes a readiness to fight as well. This big woman stands on a steep hillside, so didn’t require a plinth.

Her counterpart in Armenia’s capital city Yerevan, Mother Armenia, on the other hand has a cathedral-like pedestal that is even higher than the statue atop it (30m and 22m, respectively):

Interestingly, this is the second statue at this location. Originally, from 1950, there stood a giant Stalin statue atop the pedestal, but in the course of de-Stalinization in the Khrushchev era this was toppled in 1962. The replacement Mother Armenia statue was erected in 1967. The pedestal houses a small war museum, originally also about WWII, but later more focused on Nagorno-Karabakh. I reckon its exhibition must be due for an update now (because of the recent renewed war over the region and its, for Armenia, unsatisfactory outcome).

While the former Soviet lands seem to have more big women statues than other parts of the world, the very best-known giant female statue has to be Miss Liberty in New York City:

Officially called the Statue of Liberty, this was famously a gift to the USA by France, and in French it was called La Liberté éclairant le monde, so ‘Liberty Enlightening the World’. It’s probably the most iconic image associated with America and a symbol of freedom. Yet when I was there in August 2002, less than a year after 9/11, the restrictions brought in for fear of more terrorism meant that the statue was closed to the public, so I did not have a chance to go up and walk the viewing platform inside the statue’s crown.

Finally, here’s a new version of a photo of a sculpture that I had originally posted on this day in 2019 on my then Facebook DT page that was purged last year. I found the image of a big woman next to a tiny little man quite fitting for this date …

I spotted this rather strange sculpture in Norway’s capital city Oslo in 2012. It’s located within the Akershus Fortress complex overlooking a large car park. Back then I had no idea what it was, who had made it and when, and what it stood for, and nothing at the location gives any such information. After a bit more searching online I’ve meanwhile found out that this is actually supposed to be a monument to the victims of WWII (1940-1945 in Norway), was created by sculptor Gunnar Janson and unveiled in 1970. But what the symbolism may be for still remains a mystery to me …