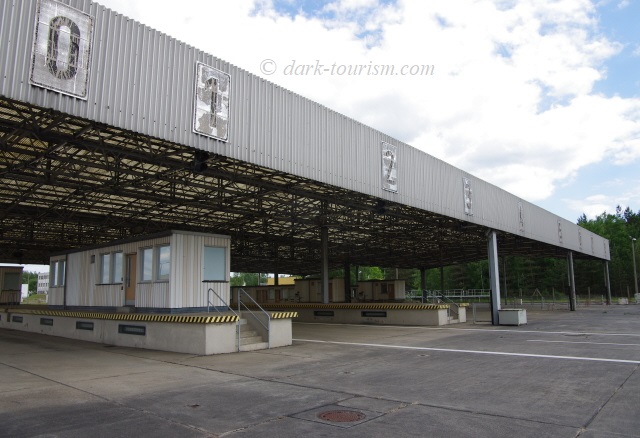 Today is the 31st anniversary of the official reunification of Germany on 3 October 1990. I already marked this last year on the 30th anniversary with a special post that recycled four posts from my purged Facebook DT page taken from my archived version. Today I won’t repeat that. Instead I’ll give you a few photos from different corners of Germany that illustrate the diversity of the country and its dark-tourism portfolio.

I’ll begin with what serves as the lead photo for Germany on my main website:

I like this photo for its subtle symbolism. It was taken through a large window pane behind which there was a blow-up of a photo showing the statue of Friedrich Engels being lifted by a crane to be moved to a new location (together with his “partner in crime” Karl Marx) against the backdrop of the iconic East Berlin TV tower. Reflected in the glass you see a part of the Reichstag, the seat of parliament before the Nazis grabbed power and again after reunification. Since that was taken in Berlin, let this photo stand for the capital city.

Another photo I picked shall be representative for the remainder of the East:

This was taken from an upper floor of a hotel in Leipzig, the second largest city in the former GDR (after East Berlin) and in the background you can see the steam clouds from the cooling towers of one of the power stations in the region that still burn strip-mined lignite coal (“Braunkohle” in German). You also get such strip-mines and power stations in the West, but the East is still more dependent on them. As this will have to be addressed if Germany really wants to answer the calls for becoming climate-neutral in the coming years/decades, this is also a big political issue. As environmentally dubious as lignite strip-mining is, I have to admit that visually I find the gigantic machinery involved and the bizarre angular “moonscapes” it creates strangely fascinating. Many years ago a group of locals “smuggled” me into a lignite strip mine in the far east of Germany, and together we explored this otherworldly scenery for a while. And that made a lasting impression on me (recounted here).

Now, moving on, to stand for the south of Germany, I selected this picture:

This was taken in the southernmost corner of Germany in the Berchtesgadener Land, a bubble that pokes deep into Austria but is part of the German southern federal sate of Bavaria. It shows the inconspicuous-looking interior of a famous building associated with Adolf Hitler: the “Eagle’s Nest”, or (to give it its real name) Kehlsteinhaus. A teahouse constructed in a precarious mountaintop location that was a gift to Adolf on his 50th birthday. He didn’t appreciate it as much as his Berchtesgaden residence of the Berghof and only visited the “Eagle’s Nest” a few times. At the end of the war the Kehlsteinhaus remained intact, somehow it escaped the Allied bombings of this Nazi homeland. US soldiers chipped bits of this marble fireplace to take home as souvenirs, but structurally the house remained relatively unscathed. Today it functions as a typical Bavarian tourist restaurant, but you can also go on guided tours that cover the building’s dark Nazi association. These tours are offered in English and are mainly aimed at an American-British clientele.

For the West of Germany I shall pick out the following photo:

This was taken inside the former ‘Government Relocation Facility’ at Marienthal, a vast nuclear bunker and fallout shelter south of the former West German capital Bonn. It is from here that the top politicians would have been supposed to continue their functions in the event of nuclear war … except that this bunker was at least half an hour’s drive from Bonn and once ICBMs with their short forewarning times had become the mainstay of the West’s and the East’s atomic arsenals, the bunker was useless. It was mostly dismantled after the end of the Cold War and a small proportion of it was preserved and turned into a visitor attraction. The photo shows the main blast door to the inner security section.

I’ll also give the centre of Germany its own photo, and here it’ll have to be one from the fromer border between the GDR and the FRG. This was one of the main checkpoints of the GDR border security (same as the featured photo at the top of this post):

This was the westernmost point of the transit motorway for Westerners to Berlin, i.e. through GDR territory, at Marienborn (the checkpoint on the Western side was Helmstedt). The GDR border security checkpoint regime was tough. I remember going through this checkpoint twice and its long-drawn-out procedures with the intimidating atmosphere that made you feel really uncomfortable – which was of course the whole point. But if you played along and didn’t cause any suspicion, you could get through in perhaps half an hour. But more thorough checks could take hours. What the border police were especially after, of course, were potential attempts at smuggling GDR citizens out into the West (and this did happen). After the end of the GDR, most border security installations were dismantled (most dramatically the Berlin Wall, of course), but a few relics survived. At Marienborn almost the entire territory of the vast checkpoint and its surrounding infrastructure was preserved and now serves as an eerie memorial.

Finally, to stand for the north of Germany I can’t help it but have to pick something from the city where I was born, Hamburg, and here I can select something brand new, from my most recent return trip there, when for once I allowed myself three whole days to reconnect with my former home:

This was actually a new discovery for me (hence not yet represented on my website) that I stumbled across by chance: a memorial commemorating the thousands of Jews who were deported from here during the Holocaust. The train station from where most were sent east was the Hannoverscher Bahnhof (‘Hanover Station’). This was completely destroyed in the Allied bombings of Hamburg, but these stretches of original rail tracks still exist. A proper memorial museum is currently under construction nearby, so I will have a good reason to return to Hamburg again in a couple of years’ time.

It’s a little ironic to mark German unity today, when within Germany the outcome of the recent general elections still so hangs in the balance. As expected the result was very close, but the party of outgoing chancellor Angela Merkel narrowly lost to the Social Democrats, who after a long period of steady decline kind-of bounced back and ended up 1.6 percentage points ahead. As the continuation of a ‘grand coalition’ has been ruled out, it will now have to be a three-party coalition and it’ll all depend on the negotiations of the biggest winner of the election, the Greens (who gained almost 6 per cent) with the Liberals (FDP, who also slightly gained). They could form a so-called “traffic light coalition” with the Social Democrats (after the respective parties’ colour code, red, yellow and green) or a so-called “Jamaica coalition” by means of which Merkel’s party, despite its weakest election result in its history, could still end up in government, this time with the Greens and the FDP (hence “Jamaica” – green, yellow and black, like the Jamaican national flag) and Merkel’s successor within the party could also be the new chancellor, even though his popularity level is rather low.

So, as I predicted, these will be tough negotiations. Last time a Jamaica coalition was attempted in 2017 it took several months and at the end the efforts collapsed and the grand coalition was resorted to once again, against much huffing from almost all sides. This time around that sort of scenario seems somewhat less likely, but we’ll see. There seem to be more calls for a traffic-light coalition (made up of all three parties that gained votes) but the FDP is politically closer to the “Blacks”. It’ll all depend on how many compromises the players are prepared to make. Right now it seems totally open.