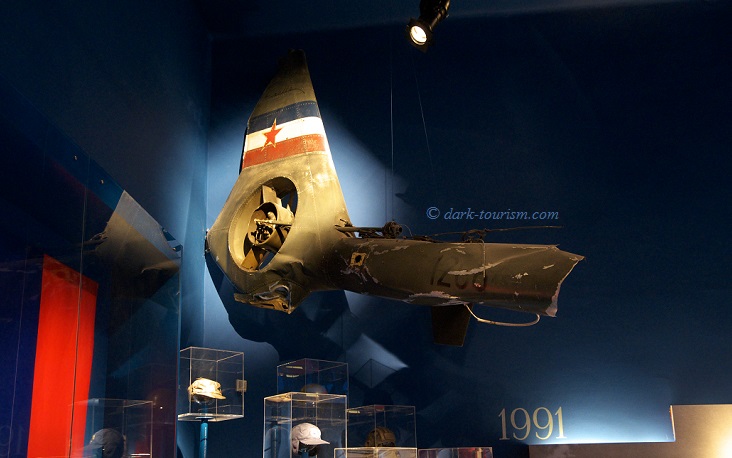 In Croatia, on the other hand, things turned out much worse. This was mainly due to the different ethnic set-up compared to Slovenia. Large parts of Croatia had an ethnic Serb population, which enjoyed the support of Serbia, naturally.

The ethnic division was personified at the very top, with Croat nationalist Franjo Tuđman as Croatian president on the one side, and Serbian nationalist Slobodan Milošević as president of Serbia on the other.

Ethnic Serbs within Croatia feared that Tuđman’s push for Croatian nationalism and independence would be to their disadvantage, some even summoned up the spectre of a new kind of Ustashe (the right-wing organization that served as a Nazi puppet regime during WWII). Tensions were rising also in the far east of Croatia, in parts of Slavonia, where a large proportion of ethnic Serbs lived. And it was here that eventually full-on war would return to Europe for the first time since WWII with the Battle of Vukovar. 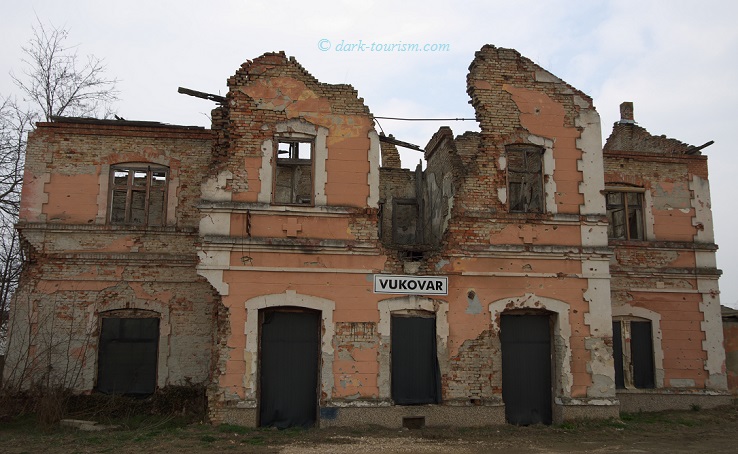 There had already been violent skirmishes in the area of Vukovar around the time of Croatia’s declaration of independence, afterwards this escalated when newly formed local Serbian militias clashed with Croatian paramilitaries and the Yugoslav army intervened. What followed was an 87-day siege of Vukovar and the near total destruction of the city. The photo above shows the preserved ruin of the former train station of Vukovar, but it’s by far not the only war scar still to be found in the area. The town’s symbol is its water tower, also shelled during the siege and turned into a memorial. There are still ruins in and around the town, whose population is still far below what it was before the war.

Vukovar also saw the first in a long string of atrocities that were to become almost characteristic of the Yugoslav Wars, especially later in Bosnia and Herzegovina (but that’s another story for another post). The one event that stands out is the Ovčara massacre, when Serbian paramilitary forces left in charge by the Yugoslav army at the end of the siege in November 1991 took a few hundred people from their shelter in the basement of the hospital to a barn south-east of Vukovar. Here they were held in a makeshift concentration-camp-like compound, tortured and eventually some 263 were systematically shot and buried in a mass grave. Both the site of the mass grave and the barn/camp are now memorial sites, as is the basement of the hospital in Vukovar. At the latter the cramped conditions of those who had sought refuge here have been recreated and peopled with eerie white mannequins, as seen in this photo: 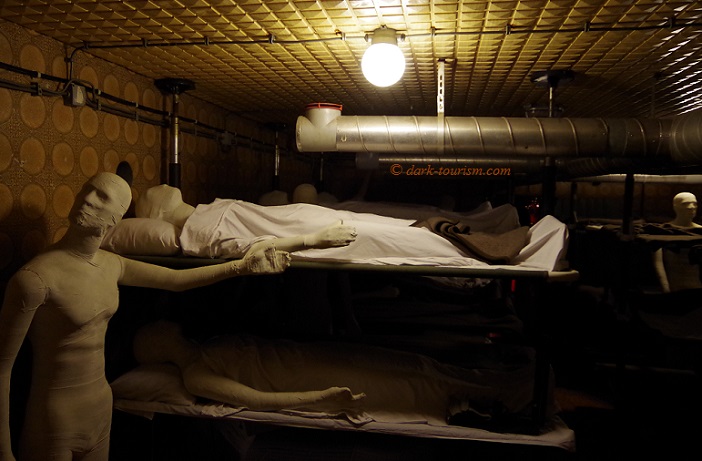 There are yet more sites in contemporary Vukovar’s extraordinarily rich memorial landscape, yet you get the feeling that the war narrative is largely “owned” by the Croatian side, even though there still is a sizeable Serbian population here. You have to wonder what they make of the Franjo Tuđman statue that was erected in the centre of Vukovar.

While Vukovar was the place where war erupted with full ferocity in 1991, it was of course not the only place affected by the unfolding Yugoslav Wars. Even the Croatian capital city came under aerial attack … twice. The first time was as early as October 1991, when Yugoslav Air Force fighter planes attacked Zagreb, especially the Ban’s Court and the palace that was the president’s residence. Today there’s a memorial centre in the heart of the city about those attacks, and one of its displays is this broken piece of furniture retrieved from the rubble of one of the damaged buildings. 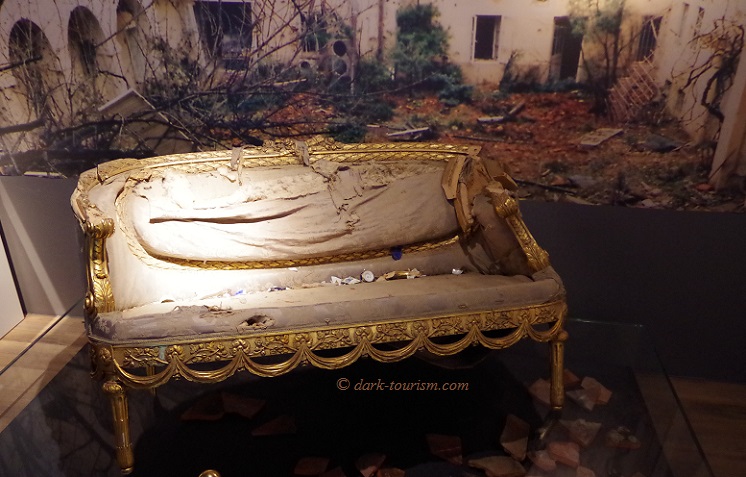 The attacking planes included Soviet-built MiG-21s from various airbases, such as the fabled underground base Željava near Bihać (itself worth a separate post). An intact MiG-21 with Yugoslav markings is on display at the Aviation Museum in Belgrade, Serbia’s capital, as seen in this photo: 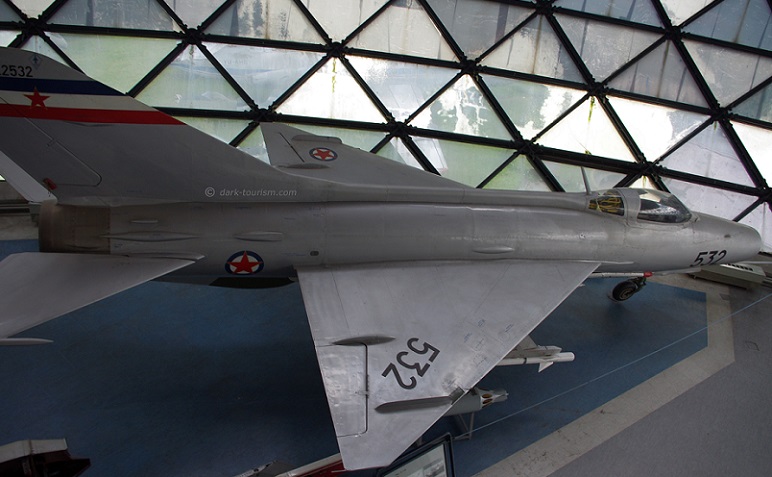 And a wrangled wreck piece of a shot-down MiG-21 is on display at the open-air Homeland War Museum in Karlovac (“Homeland War” is an even more patriotic sounding alternative name in Croatia for what’s also referred to as the “Croatian War of Independence”), as seen in the next photo: 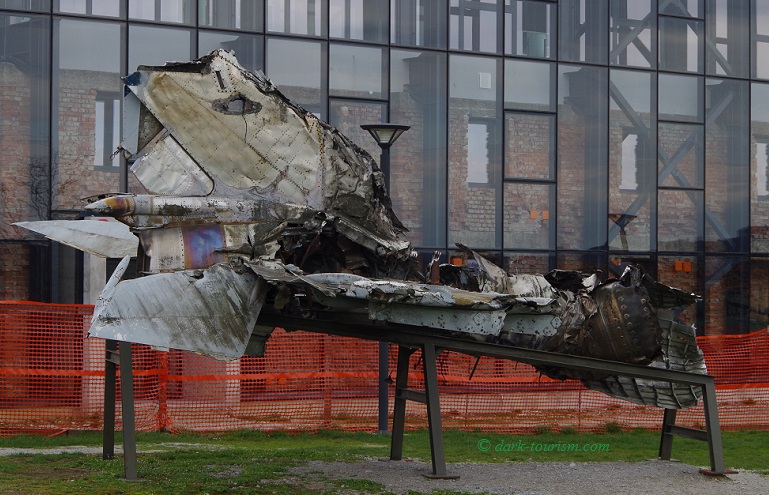 Karlovac found itself right on the front line between Croatian forces and the paramilitaries of the self-declared Republic of Serbian Krajina. This short-lived entity was eventually overrun by a reinforced Croatian military during its decisive push towards the end of the war in 1995.

It was at this time of mounting Croatian military operations, more precisely on 2 and 3 May 1995, that the Serb Krajina Army used rocked launchers to shower Zagreb with cluster bombs, killing seven inhabitants and wounding some 200. The commander who ordered this pure terror attack was later sentenced to 35 years’ imprisonment for this war crime at the International Criminal Tribunal for the former Yugoslavia in The Hague, in the Netherlands. This second attack on Zagreb is also covered in the city’s small memorial centre (see above).

At the large “Homeland War Memorial Centre” at a military base in Vukovar, the substantial collection of military hardware on display includes a specimen of the sort of missile launcher used in the attack on Zagreb, namely an Orkan M-87 LRSV multiple self-propelled rocket launcher, a dark, spooky monster of a war machine, as seen in this photo: 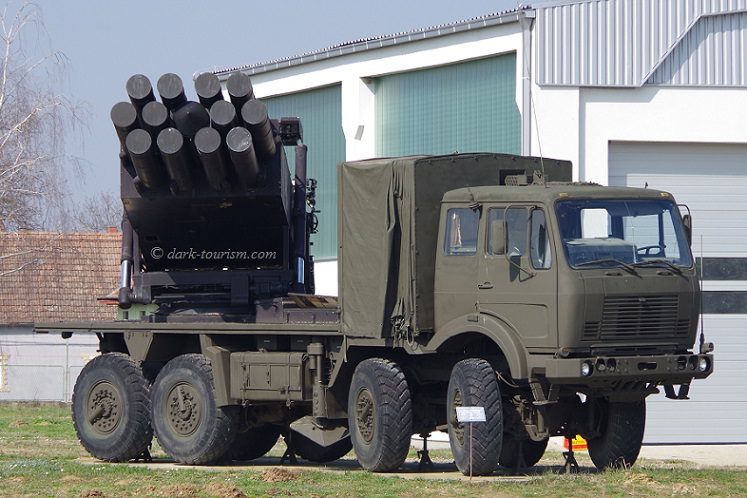 The Yugoslav Wars, in particular the chapter in Bosnia and Herzegovina, were officially ended with the Dayton Accords, a peace agreement reached on 21 November 1995 (at the Dayton USAF base in Ohio) by both Tuđman and Milošević, Bosnia’s president Izetbegović as well as several Western leaders including the USA’s then president Bill Clinton, Britain’s prime minister John Major, France’s president Jacques Chirac, Germany’s chancellor Helmut Kohl and Russia’s prime minister Viktor Chernomyrdin. While the treaty officially ended hostilities between the original belligerents and the NATO intervention forces, it wasn’t quite the end of the troubles in ex-Yugoslavia. Vukovar and the surrounding area of Slavonia were not returned to Croatia until 1997. And of course we all know that war re-erupted over Kosovo only two years after that. But that too is another story for another time.

For now this is it – I’d just like to recommend to any dark-tourism-inclined traveller the exploring of Croatia’s 1990s war heritage sites, especially those in and around Vukovar. This is a part of the country that is largely ignored by international visitors, but shouldn’t be. It’s much more edgy and raw than the picturesque tourism hotspots on the Adriatic coast, but well worth it for anybody with more than just a passing interest in the complicated modern history of this part of the world.