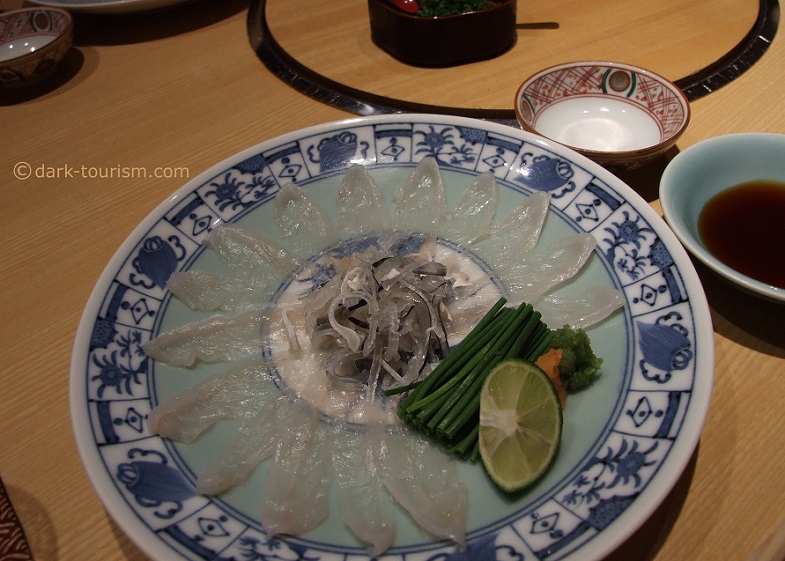 As announced yesterday, our latest theme poll had two joint winners. This is the first one – ‘dark tourism & pianos’ will follow next week.

So let’s take a look at how food can play a role in dark tourism:

To begin with it can simply be a case of the location where the food is consumed being a dark travel destination. That could be said for this nice spread of kimchis and other delicacies I had at a traditional restaurant in Kaesong in North Korea:

It got quite a bit darker, though, when at the same restaurant ‘dog soup’ was offered. That’s right, soup made with real dog meat:

Apparently eating dogs is an old classic in parts of China and Korea, including the north (the DPRK – Democratic People’s Republic of Korea). I declined the offer in Kaesong, being generally a non-meat eater. But in this case it was also on ethical grounds. We were told by our British guide that dog meat is really tough unless you get a lot of adrenalin shooting through it at slaughter. That’s why they slowly batter the dog to death. It’s the opposite of what is usually done with cows, who are made unaware of what’s about to happen as far as possible and then quickly killed. The photo of the dog soup I took at a neighbouring table – as some in our group couldn’t resist the temptation to try this. Apparently it was quite spicy (and that alone I wouldn’t have minded at all).

Eating dogs is perhaps an extreme example, but there are also other animals that many people wouldn’t consider eating, while in other parts of the world it’s quite normal. Here’s a classic example – look carefully at the sign above these market stalls:

Even if you can’t decipher the Kazakh and Russian inscription, the little symbol next to it gives it away that this is the horse meat section in this market hall in Almaty, Kazakhstan. While horse meat is fairly common in some European countries too, e.g. Poland or France (I’ve also spotted horse meat stalls here in Austria), others balk at the very notion, especially Brits. Remember when in 2013 horse DNA was detected in some frozen “beefburgers” from supermarkets in Britain, so horse meat must have been illegally mixed in with the beef. The outcry was immense. Here in Austria some Kazakhs we encountered said they couldn’t see what all the fuss was about. Why weren’t those Brits happy that they got such a delicacy? Different cultures …

What I personally found more disturbing at this same market was an adjacent section where they sold sheep heads:

Apparently, the eyes are traditionally regarded as the best bits – and hence are often offered to the guest of honour (what a foreign visitor would typically be) at a traditional Kazakh feast. Fortunately I was spared that experience (refusing the offer would have been very bad manners) when I travelled to the country back in 2011.

Cultural differences also apply to the consumption of insects and reptiles. It is well known that fried grasshoppers, beetles, scorpions and even tarantulas are widely eaten in South-East Asia, but it makes many Westerners shudder encountering a basket of snacks on offer in a market like this (in Phnom Penh, Cambodia):

I can’t say what is worse, the bugs or the snake skins. But it is of course irrational to be repulsed by eating insects. It has been argued that turning to insects as a replacement for beef, pork and lamb could make a tremendous contribution to curbing climate change. Indeed, cattle farming in particular is now the single biggest contributor to global warming. Insects, on the other hand, are cheap and sustainable to farm. Food for thought!

However, the insect-eating can get a lot darker in some cases, like this for example:

This is a type of grub (“suri”) that some of the native tribes in the Orinoco Delta and the Amazon Basin regard as a delicacy, especially eaten raw and alive. You bite the wriggling body off behind the (inedible) head, which you discard, and then devour the rest. Apparently the skin is quite tough, but the texture of the inside has been likened to peanut butter. As a dare, such suri grubs are sometimes also offered to tourists on jungle excursions. This particular one was presented to me by my guide on a tour by boat to a small village of natives of the Warao tribe in the remote (and road-less) Orinoco Delta, Venezuela. The grub was really just for show, not for actually eating. And I don’t think I could have done it.

What I have done, though is play with the “yuck factor” for food at Halloween, when I prepared “eyeballs” from lychees and made the pumpkin “puke” guacamole:

But enough of “disgusting” food. Of course food is also a factor of great importance in war. Here’s an example – some food rations left from the Falklands War:

These relics are on display in the small war museum at Port Howard on West Falkland where I went in late 2013. The tins seen here contain(ed) sausages (Wiener) and meatballs in sauce, respectively. The little bottle is interesting, culturally, as it’s an empty bottle of Argentinian whisky, distilled and bottled in Buenos Aires, but it has an English name: “The Breeder’s Choice”. That it’s in English probably just reflects the fact that whisky is primarily associated with Scotland, i.e. the UK. It’s of course not without irony that it ended up here due to the war that Argentina went to against Britain over these remote islands. “Breeder’s Choice” is additionally ironic, as sheep breeding is a main industry in the Falklands.

And then there are cases of the food stuff in question actually being dangerous in itself, such as certain highly toxic mushrooms or other poisonous things. In this next photo (same as the featured one at the top of this post) we have a plate of Fugu, in the sashimi form, which I had at a restaurant in Tokyo back in 2009.

Fugu, or pufferfish, is infamous for being extremely toxic. Hence the preparation of Fugu is strictly controlled in Japan (it is completely illegal in most other parts of the world including the EU). Only specialist chefs having undergone specific training for something like three years are allowed to prepare Fugu (and the fail rate in the exams is ca. 70%!). The skill lies in separating the edible parts form the toxic bits, especially the liver, without contaminating the rest. Special knives with extremely thin blades are used for this.

Given these strict regulations it is actually quite safe to eat Fugu in specialized licensed restaurants. There are now also farmed pufferfish that are hardly toxic at all. Most deaths from Fugu result from lay people (illegally) preparing Fugu at home. Other, high-profile cases of Fugu poisoning resulted from basically playing “Russian roulette”: the liver (the most toxic part, remember!) is regarded by some culinary extremists as a delicacy. But it is essential to get the (miniscule) dose right. Just a little too much and it’s lethal. And dying from Fugu poison is very nasty indeed: the toxin paralyses the muscles while the victim remains fully conscious, but is rendered unable to speak (thus unable to call for help) and eventually unable to breathe, so death is by asphyxiation. Absolute horror.

The Fugu I had in a licensed restaurant was of the cheaper (but still pricey!) farmed variety so it was practically without risk. Still, there is without question a certain dark “thrill” in trying it for the first time (and in my case the only time). So, what does Fugu taste like? It’s actually quite unspectacular and bland. The sashimi form is OK, but the other preparations I had, e.g. fried or boiled in broth, were not very nice at all. The fish is very bony and chewy and virtually taste-free.

Finally, here’s a sort of “forbidden fruit” that had featured on this blog before not so long ago:

A different photo of such tempting ripe and juicy-looking apples featured in my post on the anniversary of the Chernobyl disaster of 26 April 1986, so less than a month ago. Of course the dark element here is not just the location as such, deep in the ghost town of Pripyat, but the fact that fruit from this location really shouldn’t be eaten because of radioactive contamination. It is one thing to wander the streets of Pripyat, where the ambient radiation doesn’t pose much of a risk at all, but quite another to ingest anything that grows here, because the elevated radiation would then not be over the minute you leave the Zone but you’d be carrying it with you, inside you. The dose such an apple emits may not be so massive, but it’s the time factor that makes all the difference, as the body could also store radionuclides like Caesium-137 in body tissue so it would stay with you indefinitely.

But so much for ‘dark tourism & food’ … bon appétit!

[Note: some portions of the text above and some of the photos have been lifted from my archive of posts on my former (purged) Facebook DT page.]