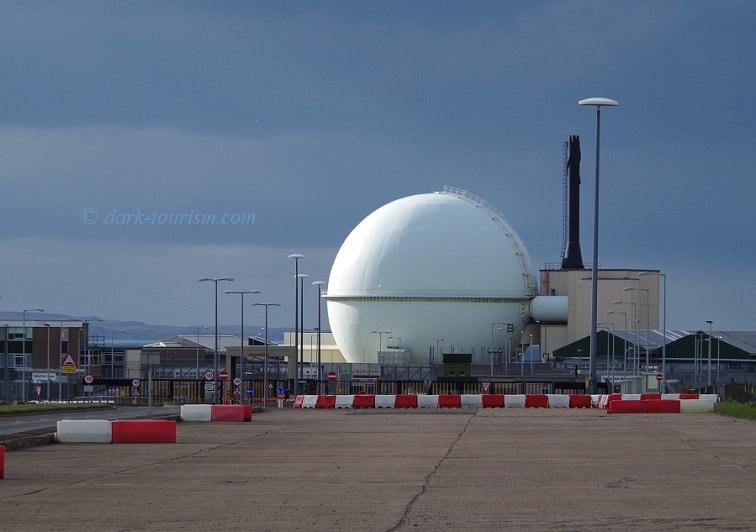 Kicking off literally, this battered work of art is actually called “The Sphere”:

It used to stand on the plaza between the Twin Towers of the World Trade Center in New York City. When the WTC was destroyed in the 9/11 terrorist attacks, “The Sphere” was damaged and dented by falling debris, but otherwise survived remarkably intact. It was then moved to a new location in Battery Park, where many New Yorkers had sought refuge from the dust clouds created by the collapsing towers.

The next sphere, also featured in the lead photo at the top of this post and repeated below, is part of the nuclear site at Dounreay on the north coast of Scotland:

This structure, a steel globe containing the experimental Dounreay Fast Reactor (DFR), is also sometimes referred to as “the sphere”, or alternately “the golf ball”. The reactor inside was one of the first to supply power to the British National Grid but was taken offline in 1977 and is currently undergoing decommissioning (while the other fast-breeder reactor at Dounreay continued until 1994). The interior installations of the DFR are already being removed, and by 2026 the iconic steel sphere will also have to be dismantled. It had been proposed that the sphere be kept as a landmark, but apparently the costs for maintenance would have been too high, so this most iconic industrial landmark on the Caithness coastline will disappear. Dounreay is a dark site insofar as there had been accidents leading to release of radiation. Especially problematic is a 65m deep shaft that was used for the disposal of all manner of materials, including irradiated ones, in a very ad hoc manner and without a proper register being kept. There was an explosion in the shaft in 1977 ripping the steel-and-concrete lid off and spreading radioactive particles around the ground. The coastline and seabed off the site are contaminated so that a 2 km strip of coast is off limits and the waters off it are banned from being used for fishing purposes. At Dounreay there is no proper visitor centre any more but a public viewpoint near the site has a few information panels for curious nuclear tourists.

Staying with nuclear tourism, as it were: spheres are also a component of nuclear weapons, namely those of the plutonium-implosion type, like the Nagasaki bomb. This is a model of that bomb, on display at the Nagasaki Atomic Bomb Museum:

This replica is cut open on one side so you can see the inner workings. The core of the bomb is a relatively small sphere made from plutonium (in fact two half spheres), and around it is a mantle of conventional explosives. When the bomb is set off these explosives are ignited simultaneously to compress the core and by this achieving criticality to initiate the chain-reaction that makes the fission explosion. These early plutonium-implosion bombs were almost spherical themselves, hence the nickname “Fat Man” for the Nagasaki bomb. Later designs on the same principles were much less bulky.

Handling the plutonium spheres was also risky, as two accidents demonstrated involving the same sphere, and killing at least one person at the Los Alamos nuclear lab. It hence became known as the “demon core”.

This bomb design is much more complex than the cruder gun-type uranium bomb that was dropped on Hiroshima (untested); so to make sure the design really worked it was tested in the desert of New Mexico before being used as a weapon of mass destruction over Japan. This was the world’s very first nuclear explosion, called the Trinity Test. As this was only a test, the device, simply referred to as “the Gadget”, didn’t need a bomb casing, so it looked even more spherical. Here’s a photo of a model of the Gadget that is on display at the USA’s principal Nuclear Museum:

Another use of spheres was in the early Soviet spacecrafts of the Vostok type, in which the first man in space, Yuri Gagarin, completed his flight in 1961. Here’s one on display at the Cosmonautics and Rocket Technology Exhibition inside the Peter & Paul Fortress in St Petersburg, together with a dummy cosmonaut suspended from the ceiling:

The spherical design was due to the mode of re-entry requiring a heat shield all around to protect the single occupant, who would then parachute from the capsule at an appropriate altitude after using the ejector seat. Before that the descent capsule would have separated from the ‘instrument section’, which contained thrusters, fuel, electrical systems and more. Here’s a model, on display in the same exhibition, of the complete package, capsule at the top, ‘instrument section’ below, involving yet more smaller spheres (presumably for propellants):

The next sphere is part of a monument in Whitehall, London, namely the memorial for the victims of the Bali bombings of 2002, in which 27 Britons were killed:

Moving on, a slight deviation is coming up. I know it’s not a complete sphere, but I thought this is close enough and such a cool sight to behold that I felt it had to feature here:

This giant UFO-like installation, featuring a huge near-spherical radom as well as several smaller ones, was something I saw in Pearl Harbor, Hawaii, in 2015 – it was impossible not to see, in fact, as this monster is a whopping 280 feet (85m) high! This is the SBX (Sea-Based X-Band) Radar platform that is part of the USA’s Ballistic Missile Defence System. It’s supposedly meant to be stationed out at sea near the Aleutian Islands off Alaska. But apparently it has been a regular visitor to the naval base of Pearl Harbor, where it allegedly undergoes maintenance and calibration tests. Rumour has it that it has never been properly operational and has never spent much time at its intended location. It’s all shrouded in much military secrecy.

The same used to apply to these radoms atop Teufelsberg in Berlin:

Teufelsberg is one of the artificial hills made out of the accumulated rubble from all those buildings destroyed by Allied bombing in World War Two. It became one of the highest points in the city, and thus attracted the interest of the Western Allies who set about listening in on Soviet/Eastern Bloc radio communications from this strategic vantage point in this “island” of the West in the middle of the GDR. Eventually a whole so-called “Field Station” was built that was operated jointly by US and British intelligence organizations. After the end of the Cold War and German reunification the now redundant site was emptied of all equipment and abandoned. It attracted urban explorers, raves, and, as you can see: vandalism. Today the site is more controlled and run as both a tourist attraction and a space for street artists. So you can also see a lot of interesting graffiti artworks here.

Staying in Berlin but back to proper spheres:

These huge spheres used to be part of the Mariendorf gasworks complex in the south of Berlin, built at the beginning of the 20th century and closed in the 1990s. A few listed buildings remain, the rest were demolished. Remarkably, these two iconic steel spheres (originally for pressurized gas storage) survived.

A particular spherical thing on a much smaller scale size-wise, but of massive dark significance for all of us at the moment, is of course the Covid-19 virus, and that image of the spiked sphere of the virus is so omnipresent in the media coverage that you may even start seeing it in totally unrelated objects, such as this:

This is actually a small physiotherapy rubber ball, intended for strengthening hands/fingers, that I use at home (I type so much that my hands have begun feeling the toll it takes). But take it out of context and it suddenly assumes this uncanny resemblance to a coronavirus.

The grey spheres in the background are radar balls of a large luxury yacht, the sandstone ones in the foreground are part of Fort St Angelo on Malta, which is the only slightly dark connection.

So much for this theme then. The next themed post will be on DT & lakes.