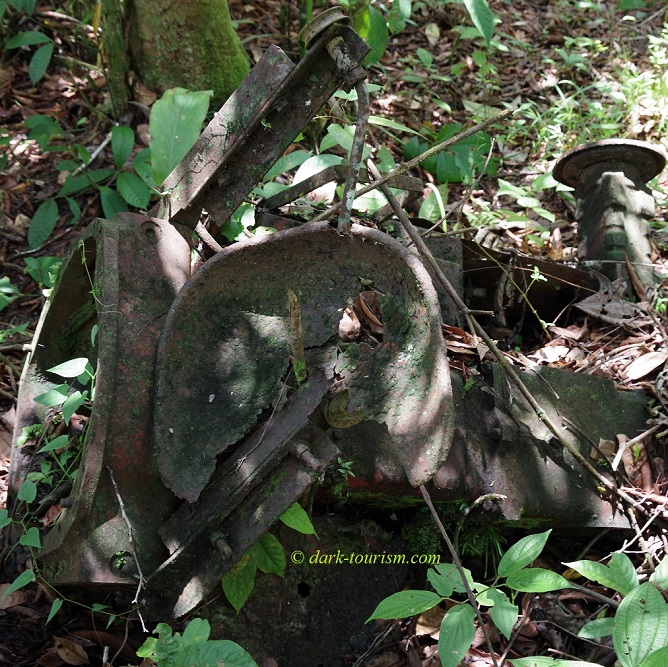 Jonestown was a religious-cum-socialist utopian agrarian commune called “Peoples Temple” and led by cult leader Jim Jones who, after getting into increasing trouble at home in the USA, had relocated with his flock to this remote spot in Guyana, South America. In 1978 US congressman Leo Ryan visited the place at the request of concerned relatives and during his time at Jonestown the situation suddenly escalated, and Ryan and some of his entourage were shot dead at the nearby Port Kaituma airstrip. They, and about 15 defectors from the cult group, had been about to board two light aircraft when suddenly several armed guards from Jonestown appeared on a tractor and trailer and started shooting.

Afterwards at the settlement Jones then ordered his commune to commit “revolutionary suicide”. This had already been rehearsed (in the so-called “White Nights”), and when it came to the real thing, many did indeed voluntarily take the prepared cyanide-laced concoction based on a powdered soft-drink preparation (not “Kool-Aid”, as popular belief has it, but a similar brand actually called “Flavor-Aid”). However, many others were forcibly injected with the poison, yet others were shot by Jonestown’s armed guards. In the end over 900 were dead, only a handful survived.

The site today is totally overgrown and hardly anything original can still be found in the dense jungle. I knew this before I actually went there in the summer of 2019 as part of my Three-Guyanas trip (to Suriname, French Guiana and Guyana itself), but I requested this unusual destination to be included in my custom-tailored itinerary and my very competent organizers made it possible. (They’re called Wilderness Explorers and are based in Georgetown, Guyana, but also have representatives in the UK, Switzerland and Australia.) It was a tough, expedition-like part of that trip, but the place authenticity to be felt at this remote and eerie site made up for the effort and costs of making it there. This is extreme dark tourism, of course, far from anything resembling ‘leisure’. A proper pilgrimage.

For illustration I can give you a few more of the photos I had posted on my former, purged Facebook DT page after my visit. I remember comments giving me kudos for having made it to this forlorn place, even though there is so little to see. All buildings are completely gone, the whole area is totally overgrown, so you need a local guide with a machete to hack through the undergrowth. The only remains still in situ are some rusty wrecks of vehicles, and possibly some mangled kitchen appliances. At the entrance to the former compound the poles that used to support the “Welcome to Jonestown” sign still stand (the sign itself disappeared many years ago). Deeper in the jungle there’s a memorial stone erected by the Guyanese government some years back, but even that is hardly accessible. Jonestown, so I was told, gets only about one or two visitors a year, mainly relatives of the victims. And you can see fading mementoes left by them at the memorial stone. Here are my photos:

Most Guyanese, by the way, resent the fact that their country is mostly (if not even solely) associated with the Jonestown tragedy in the outside world. I’ve actually heard the plea “oh, don’t mention Jonestown” said almost in exasperation at the lodge in the Rupununi where I stayed later on that trip.

And at the office of the agents who had helped me organize my visit, a guy who lived near Jonestown at the time of the cult commune said quite clearly that he would never go there again. Some Guyanese even regard the place as “haunted”. In reality it’s just a forlorn place, physically almost vanished and forgotten, but the legacy still lingers. It cannot be helped, no matter how much Guyana tries to promote itself in other ways. For many people Jonestown will remain the only thing they know about Guyana (even if they’d struggle to place the country on a map; many even think Guyana is in Africa).

(The above post incorporates in part text reconstructed from my archives, namely from a post on my purged Facebook page that was originally posted on this day last year.)