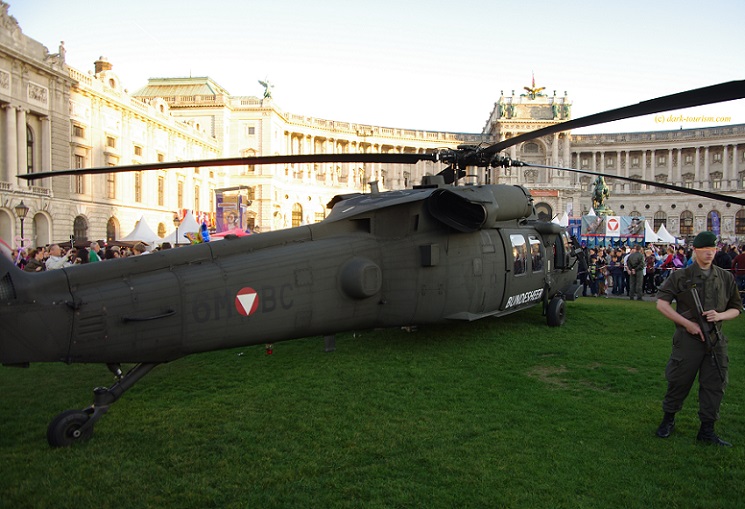 Today it’s “Nationalfeiertag” (literally ‘National Celebration Day’, or just ‘National Day’ for short) in Austria, the country I reside in. It’s another good opportunity to dig out from my archives the photos and texts I posted on my DT page on Facebook until it got purged. I’m reproducing them here in reverse chronological order, i.e. starting with last year’s post first:

On this Day it’s “Nationalfeiertag”, or ‘National (Celebration) Day’, here in Austria. The date commemorates the coming into force of the nation’s neutrality in 1955, which was laid down in the “Staatsvertrag” (‘State Treaty’), signed already in May 1955 and in force from July 1955, by means of which the country was released into sovereign independence again after over 10 years of Allied occupation and division into Zones (just like Germany had been from 1945-49 – and in the case of Berlin until 1990). 25 October was the deadline set in the Treaty for all foreign troops to have left the country, hence the 26th was regarded as the “Tag der Freiheit” (‘Freedom Day’). One condition for the end of the occupation was this military neutrality, which is why Austria joined neither NATO nor the Warsaw Pact. Politically and culturally, however, the country aligned more with the West. Hence it had a long stretch of the Iron Curtain running along its borders from north-east to the south-east.

Despite all that declared military neutrality, these days the Nationalfeiertag involves the Austrian military holding so-called “Leistungsschauen” (hey, translators amongst my readers: try to translate that word into English!), i.e. the public display of all manner of military hardware, from helicopters to fighter planes and from tanks to machine guns. It’s basically a big military fun fair for boys of all ages – and especially the young, who even get instruction from soldiers in things like how to hold a machine gun properly, as seen in today’s photo!

(For privacy/anonymity I pixilated the faces of the people in this shot.)

On this Day it’s Nationalfeiertag (National Day) in Austria, when the Austrian military shows off its hardware, such as this helicopter, with great pride (which, given the size of the country and its military, I’ve always found a bit over the top).

The location seen in this photo is “Heldenplatz” (‘Heroes Square’) in Vienna, with the Hofburg Palace in the background, with that balcony from which Hitler declared the “Anschluss” back in 1938, when the people of Vienna so heroically resisted … er … hang on … no … er … hmmm

Anyway, it’s usually a real “Volksfest” (tricky one to translate, that … it’s certainly not ‘folk festival’, rather a ‘popular event’, though that doesn’t really capture it either) with lots of people attending. In addition to hardware demonstrations and displays there are always also food and drinks stalls, music, talks, and games … especially, of course, for the kids (gotta get them early).

This photo was taken a couple of years ago. Today, however, I won’t attend. Instead I’m actually flying away, namely to the UK (only to attend a wedding, no dark tourism is planned).

On this Day it’s “Nationalfeiertag” (‘national day’) here in Austria, when its military puts on a “Leistungsschau”, i.e. it shows off its hardware, usually some helicopters, a fighter jet (replica), various tanks and artillery. Kids can handle machine guns (get them early!) or clamber over the tanks … or not, as the case may be: the sign in the first photo reading “Raufklettern verboten” means ‘do not climb’. The vehicle in question, whose gun barrel you can see here, is a M109 self-propelled 155mm howitzer (a US design from the 1960s).

The second photo shows the same without the sign and with the balcony of the Hofburg Palace visible in the background. This is all on Vienna’s Heldenplatz (‘heroes square’). This part of the palace is the Neue Burg – the last bit added to the Habsburgs’ inner city palace complex. It was finished in 1913, just before WW1 (the defeat in which ended the monarchy).

And it’s that balcony that is actually the dark link here: from here Adolf Hitler proclaimed the “Anschluss” of Austria, i.e. the de facto annexation of his home country by the Third Reich … and a crowd of 200,000 were cheering. So he was certainly able to “raufklettern” here. I guess there was no sign prohibiting this back then …

Today, the Neue Burg is home to the national library and a couple of museums – but the dark historical role that this balcony played is not especially marked [update 2020: it is now, as part of a new history museum, which I still haven’t managed to visit …]. Austrians usually prefer to think of their country as the “first victim” of Nazi Germany, and don’t particularly want to be remembered as cheering collaborators. “Vergangenheitsbewältigung” (‘coming to terms with one’s past’) is certainly more advanced in Germany these days [but Austria is slowly catching up].

On this Day, 26 October, it’s “Nationalfeiertag” (‘national holiday’) in Austria, and a key part of the festivities is that the Austrian military shows off its gear on Heldenplatz (literally ‘heroes square’) and other locations in Vienna. They call it “Leistungsschau” (literally ‘capability show’).

Now, I have to admit that my knowledge of contemporary Austrian military heroism and/or capability is a little limited, but from a purely historical perspective I’ve always found it just a tad strange to see tanks, artillery, war planes and helicopters lined up just outside the Hofburg Palace – right underneath that balcony from which in 1938 Hitler proclaimed the Anschluss (i.e. annexation) of his home country Austria to the German Reich to a cheering crowd.

Of course, these days the “Nationalfeiertag” is supposed to be celebrating the modern Austrian state’s neutrality that came into force 61 years ago on this date (hence Austria has never been a NATO or Warsaw Pact member, though it has had “co-operation” arrangements with NATO).

But the way in which soldiers enthuse children to hold machine guns and stuff does seem just a bit at odds with that nominal cause for the celebrations. The message seems to be rather: hey, the military is fun and cool! There are also stalls informing the public about Austria’s current roles in various peacekeeping missions and such like, but visually it seems to be more a glorification of all things military.

This year, by the way, the use of Heldenplatz is restricted due to construction works (because of refurbishment of the parliament building) so the military “Leistungsschau” is spread out over a number of other squares in the city centre as well.