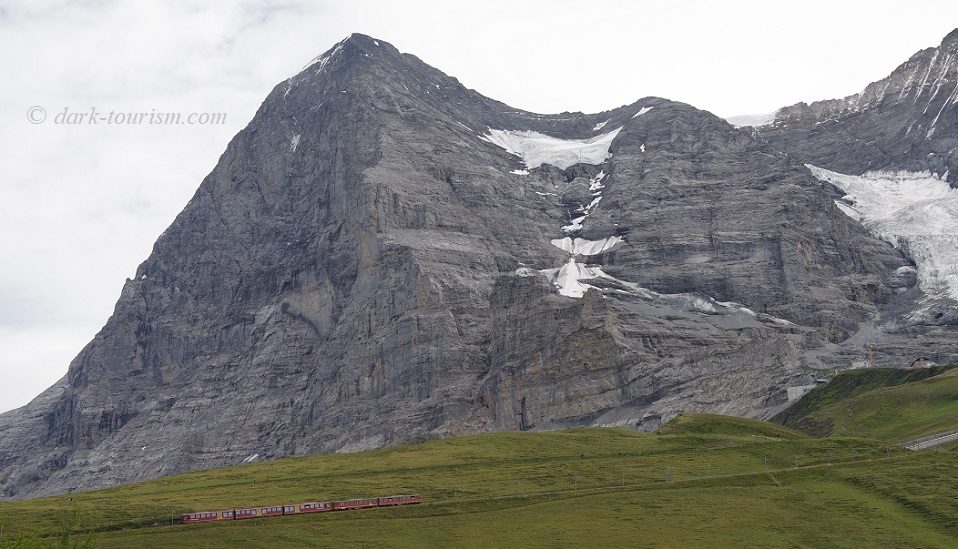 Just back from Switzerland this morning! It was a nice eight-day trip, mostly in the Alps, but also a bit of city (Zürich). The main emphasis was on the spectacular Alpine scenery. Around Zermatt this is indeed dominated by the Matterhorn, the planet’s most iconic peak:

It cleared from clouds only in the evenings, but it was then a truly grand thing to behold. I also got up one morning very early (at sunrise) in the hope of being able to see the north face at first light, but that was not to be … too many clouds.

The high Alpine trio of Eiger, Mönch and Jungfrau near Interlaken was another highlight, as was the sight of the Aletsch glacier, Europe’s longest. I saw the latter twice, first from the Eggishorn about halfway down the glacier’s length and again after I took the famous train that goes through a tunnel inside the Eiger and Mönch to reach the Jungfraujoch, Europe’s highest train station. From up there, at ca. 3500m above sea level you get a glorious view of the snow-and-ice Alpine wonderland from where the Aletsch glacier starts:

As for the dark elements: well, the building of the Jungfrau Railway cost several workers their lives during the tunnelling. At the touristified complex at the summit one section commemorates those victims of the project (which took decades to complete from the late 1890s to the 1920s). Most names looked Italian. But there was also a plaque for a much more recent victim, for a Portuguese tunnel worker who was killed in an accident on the job here in 2019!

And all those mountains themselves come with some dark elements, especially in the form of tragically failed mountaineering expeditions. The Eiger’s near vertical North Face (Eiger Nordwand) is infamous as one of the world’s most difficult climbs – and it has claimed many mountaineers’ lives. Here’s the featured image of that mountain again, with the Jungfrau Railway in the foreground:

The Matterhorn also features one of the fabled north faces in the Alps and it too has claimed numerous lives – not least four of the party of seven, led by Edward Whymper, who in 1865 managed the first ascent to the peak. But it’s remembered less as a glorious success than as a tragedy because of the deadly accident. This happened shortly after the party had started their descent, when one of the climbers slipped and dragged three others down with him over the edge of the north face. One of the bodies of these four who fell to their deaths was never found. The surviving three climbers, including Whymper, were saved because of a snapped rope … they were even accused of having cut the rope themselves, but that was never corroborated. Yet the shadow of controversy and suspicion still hangs over the whole story. In the Matterhorn Museum in Zermatt there was a whole separate exhibition about the case and in the main part that very rope that snapped on that tragic day is on display:

There were also other dark artefacts on display, including some skulls – always a favourite in dark tourism, even though these are more of archaeological interest, really.

This trip also included a little pilgrimage, namely to the grave of avant-garde author James Joyce in Zürich. Since my middle name, Ulysses, was taken from the title of James Joyce’s most seminal work (my father was a James Joyce disciple at the time of my birth!), I felt duly obliged to make this pilgrimage, despite the rainy weather (btw. outside Zürich I was much luckier with the weather).

Also in Zürich I visited the Moulage Museum at the university, which features excellently made wax models of all manner of unsavoury medical conditions such as syphilis and leprosy. Unfortunately, photography was not permitted in this museum … unlike at the large state museum (Landesmuseum), which included a modern history section. And the latter naturally comes with several dark aspects, from Switzerland‘s role during the Third Reich period (during which the Swiss infamously stored the Nazis‘ gold reserves), its defence policies and its use of nuclear power, which is also controversial in the country, as exemplified by this mock-up nuclear waste barrel used by Greenpeace in anti-nuclear protests:

Finally, a special kind of dark was represented by the HR Giger Museum in Gruyères, home to the artist’s large collection of his own as well as other artists’ dark works of art. Giger is of course most famous for his designs for the Sci-Fi horror movie “Alien” (he won an Oscar for it), and naturally those feature prominently in the museum. Again, photography inside the museum was not allowed, but as a paying guest at the adjacent HR Giger Bar I was free to shoot away in there. Here’s one example:

There’d be several other dark sites in Switzerland, but I wasn’t able to fit any more in on this short trip (e.g. the eminent Red Cross Museum in Geneva), and others were not even open at the moment due to the pandemic (e.g. some ex-military forts and tunnel complexes in the mountains). So there’s more for another trip some time. I’d better save up for that, whenever it may be, though, because Switzerland is indeed a painfully expensive country, especially as far as mountain railway fares and eating/drinking out are concerned. In general prices aren’t quite at Norwegian levels but not too far off. So unless you’re travelling in your own vehicle and self-cater, you burn a lot of money very quickly in pricey Switzerland!

So much for that recent trip. I now also still owe you the result of the latest poll regarding the next themed post. Out of the four on offer, a) ash, b) flames, c) cars, and d) villas, it was (to my slight surprise) the latter, DT & villas, that came out at as the winner, narrowly followed by cars and ash, while flames only got one vote. So, villas it will be, and DT & cars will be entered in another poll at some point.