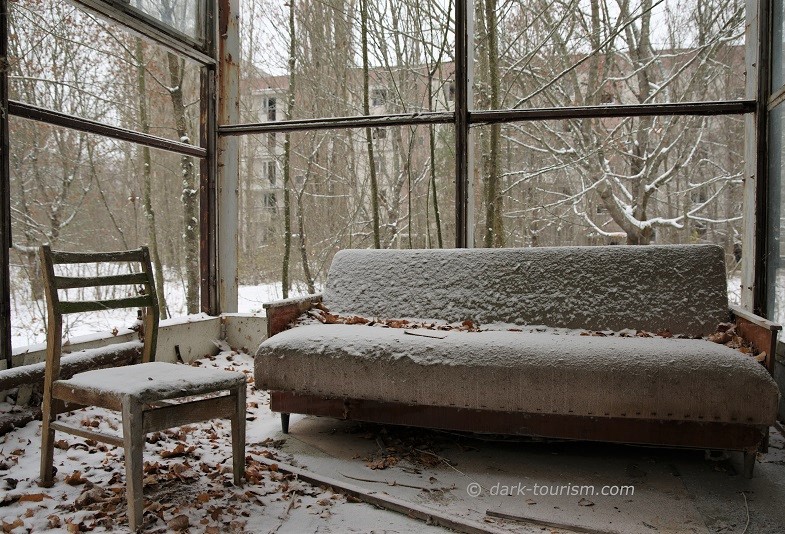 And here comes the second of the themed posts (after last week’s “DT & hands”) that featured in our most recent poll, which didn’t have a clear result. So for this time I’ve picked furniture.

The photo below was taken at the DDR-Museum (‘GDR museum’) in Berlin and shows a reconstruction of the furnishings of a typical East German 1970s/early 80s living room – note in particular the wallpaper and the lampshade!

While some people might feel a pang of Ostalgie (being nostalgic for the former East Germany), this will probably not apply to the next photo, which depicts one of the much darker sides of the GDR. This is an original Stasi interrogation room (note the padded door and the tape recorder!), namely at the Lindenstraße Stasi prison in Potsdam in Brandenburg just outside Berlin:

And staying with the GDR’s secret service organization, at the Stasi Museum inside the former Stasi-HQ at Normannenstraße in East Berlin, one floor features the preserved interiors of Erich Mielke’s private rooms. Mielke was the feared boss of the Stasi. Yet the furniture has the same drab 1970s “Spießigkeit” about it as the living room above (German “Spießigkeit” is difficult to translate, it contains facets of ‘stuffiness’, ‘smugness’, ‘conventionality’, ‘narrow-mindedness’ and more):

Leaving the GDR but staying in the former Eastern Bloc, the next photo was taken in the former study of Bulgaria’s long-time communist leader Todor Zhivkov, namely at his former residence in Arbanasi near Veliko Tarnovo. The building has been converted into a boutique hotel, but the Zhivkov office was retained in its original form and can be visited on request:

And to round off this communist furniture series, here’s one from the Lenin Museum in Gorky Leninskiye outside Moscow, Russia. The photo shows the reconstruction at the museum of Lenin’s original office in the Kremlin:

Moving from communists to Nazis, here’s a regional Nazi big shot’s office, as recreated at the Alsace-Moselle Memorial in France, complete with Nazi flag with swastika and a Hitler portrait (the sort of photo that’s dangerous to post on Facebook!)

And as the final bit of office furniture, the next photo shows a top military office in the manor house at Bletchley Park, in Great Britain, the place where the code-breakers around Alan Turing managed to decipher the Nazis’ enigma machine in WWII:

When WWII against Nazi Germany was won (in no small part thanks to the code-breakers of Bletchley Park), the final unconditional surrender document that ended the Third Reich was signed in this hall at what was then the Red Army’s commander Zhukov’s Berlin HQ at Karlshorst, Berlin. It later became the German-Russian Museum, and the reconstructed surrender hall is its prime piece, with its long tables, rows of chairs, grand chandeliers and the four flags of the Allies:

At the opposite end of the grandness scale I can offer up this photo of a lone simple chair in the darkness of Željava, the abandoned former Yugoslav air force underground fighter jet airbase inside a mountain in Croatia:

Also not exactly grand is this sparse and grim prison cell, at one of the world’s most legendary prisons, Alcatraz:

Can it get any grimmer? Oh yes … here’s a photo of the rows of three-tier wooden bunk beds inside one of the barracks of the concentration camp of Auschwitz-Birkenau:

Not so grim to look at, but once with an extremely dark potentiality is this next one. This is the deputy commander’s seat of the Oscar-Zero Missile Alert Facility’s Launch Control Center (LCC) in North Dakota, USA. From here, ten Minuteman III ICBMs with nuclear warheads could have been launched had the Cold War turned into a Third World War … which would have meant the end of human civilization (and most of the Earth’s biosphere). After the end of the Cold War, however, the whole squadron was disbanded in the 1990s and the missile silos and LCCs decommissioned and dismantled, except for this one. It was preserved and declared a State Historic Site. It opened to the general public in 2009:

By the way, while this particular site was decommissioned there are still some 450 Minuteman III missiles on active alert (of the once over a thousand), still enough to bring about a nuclear Armageddon. The Cold War may be over, but the nuclear threat is not.

But now turning to the lighter end of the dark scale, this next photo featured on this blog before, namely in last year’s post on the occasion of the 30th anniversary of German Reunification:

This sofa with its upholstery featuring multiple state symbols of the former GDR can be seen as an expression of “Ostalgie” (a blend of “Ost”, ‘east’, and “Nostalgie”, ‘nostalgia’). The photo was taken at the border museum of Mödlareuth, one of a whole series of memorial sites along the former inner-German high-security border between the GDR and the FRG – once the most fortified stretch of the Iron Curtain.

Another sofa (plus a chair) features in this next photo – it’s the same as the featured photo at the top of this post. This photo was taken in Pripyat, the legendary ghost town in the Chernobyl Exclusion Zone, namely in November 2018, just as the first snow of that winter began to fall, with some snow being blown into the interiors of buildings through cracked windows, thus giving these pieces of furniture that atmospheric light dusting of white:

And here comes yet another sofa. This one was the deathbed of Engelbert Dollfuß, the founder of “Austro-Fascism” and de facto autocrat of Austria from 1933 to 1934. He was killed in an attempted, but failed, putsch by Nazis who – unlike Dollfuß – wanted an “Anschluß”, i.e. integration of Austria into Hitler’s Third Reich. The putsch may have failed but as we know the Anschluß did come about less than four years later. This sofa was where Dollfuß bled to death after he was shot, and the stains on the upholstering may well be from his blood. It is now on display at the Military History Museum in Vienna. Also on the sofa is a Dollfuß death mask:

And last but one, here’s another historically significant deathbed, namely that of Napoleon Bonaparte who breathed his last in May 1821 at his place of exile: Longwood House on the remote South Atlantic island of St Helena. The mansion is now a museum run by the French state, to whom the whole estate was sold in 1854. It is probably St Helena’s top tourist attraction and the Napoleon deathbed is its dark “highlight” (together with a Napoleon death mask):

And the final one for this “DT & furniture” post is a photo of two rather bland looking wooden benches:

These simple benches assume their dark aura only when you know what arses once sat on them – namely those of the Nazis put in the dock at the Nuremberg Trials after WWII. And most of them, including Hermann Göring, were eventually sentenced to death for their crimes against humanity. The benches are now part of the Memorium Nuremberg Trials.

And this brings the post “DT & furniture” to a close. Next of the themes from our most recent poll will be “DT & reflections”.