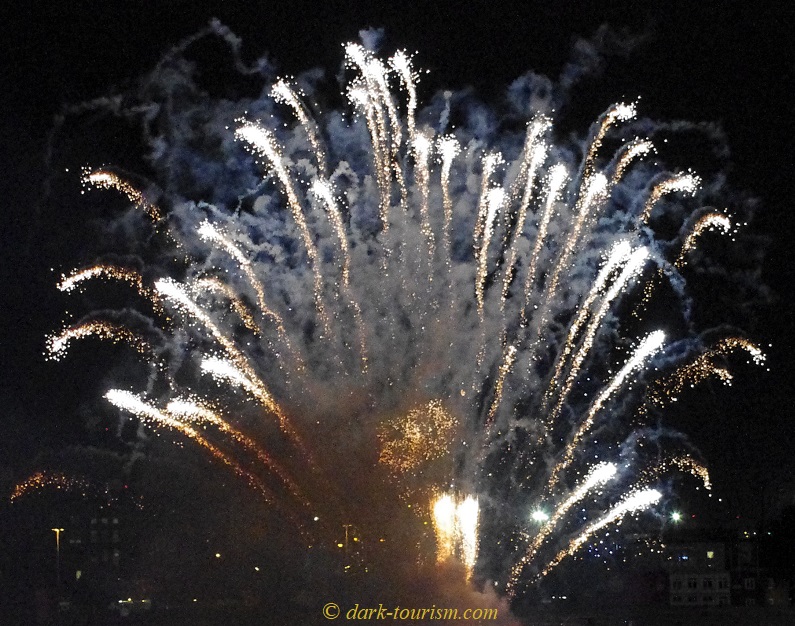 It was exactly on this day, precisely one year ago, on 28 May 2020, that this blog went live and the first post went up. To mark this first anniversary, I went through the entire blog and picked twelve of my favourite photos used on the blog so far, one for each of the twelve months I’ve been here, as it were.

And to make it a bit potentially interactive, I’d like to ask you to vote for your single most favourite photo on this blog, either pick out one of these twelve I’ve chosen for this post or nominate any other photo that has ever featured anywhere on here. Go on, take your pick and leave a comment below!

Here are my 12 choices … in no particular order:

I like this photo of the Golden Gate Bridge in San Francisco, USA, not so much because of the bridge itself, but rather for the fact that the chain in the foreground seems to echo the big bridge in the background. The photo appeared in the theme post “DT & Bridges” and was included because the Golden Gate Bridge is (or rather was) an infamous suicide spot.

Next one is this:

In a way this is a similar composition in principle. In the centre is the famous Ferris wheel of Pripyat, Chernobyl Exclusion Zone, Ukraine. Here the circular shape of the Ferris wheel is also echoed by the foreground, but in this case that rather frames it. It was taken from a former sports centre within view of the funfair.

Symmetry also plays a role in the next photo:

What I like in this photo, taken at the abandoned Beelitz Heilstätten in Germany, is the fact that the almost perfect symmetry of the architecture is broken by the randomness of the shattered glass of the windows as well as by the haphazardly growing plants at the top.

As for just broken glass, this is one of my all-time favourites:

I just find these two-toned shapes very aesthetically pleasing. This is an old photo, taken in 2009 in Mostar, Bosnia & Herzegovina, at a large war ruin, a former bank. Today it would no longer be possible to take this picture, as I have been informed that the building has meanwhile been entirely stripped of everything other than the raw concrete.

And now for something completely different:

This was taken from a plane on the approach to Longyearbyen, on Spitsbergen, Svalbard. It was July and so it was light 24/7 so high up above the Arctic Circle. This photo was taken at around midnight. I just love the long blue shadows the mountains throw on to the snowy glacial world, as if to underscore the literal meaning of the island’s name (“Spitsbergen” means ‘pointy mountains’). I’m also fascinated by landscapes that are completely devoid of people and show no evidence of human interference at all. There aren’t all that many places left on the surface of planet Earth that you can say that about.

As if for maximum contrast, now for something that makes a massive human-made statement, but with nature playing a hand as well:

This is a shot of part of the gigantic Duga over-the-horizon radar installation that stands in the middle of nowhere within the Chernobyl Exclusion Zone. The mystique of this enormous Cold-War relic is, I think, further emphasized here by the unusual angle of the photography – as well as by the mist in the air that increasingly blurs the far end of this view. Magical.

The next one is an example of deliberate blur, called ‘bokeh’ in photography, by carefully choosing aperture and focal point:

This was taken at the border museum of Mödlareuth in southern Germany which used to be the Iron Curtain border between the GDR and Bavaria. Here some of the border fortifications have been preserved, including two GDR-era watchtowers. The focal point is on the tower in the far background, so the barbed wire going through the frame in the foreground is nicely blurred, underscoring, in my view, the menacing look of this border installation ensemble.

This next one, in contrast, shows a very different sort of blur:

This was taken with a super-zoom camera on the Salar de Uyuni in Bolivia. The surface of this largest salt flat in the world was covered by a thin layer of water from recent rains, turning it into a gigantic mirror. I took this by stabilizing the camera on the roof of our jeep and zooming in at full 35x on to another group of travellers and their jeep far away. The blur here comes simply from the great distance and the different temperatures in the air, creating this mirage-like effect.

But now for a different kind of projection, shadows:

This was taken inside the larger of the two unfinished cooling towers intended for Block 5 & 6 of the Chernobyl NPP, which were given up in the wake of the 1986 disaster. I spotted two birds of prey circling inside throwing their shadows on to the inner walls to make it look like there were four birds. Reproduction by light and shadow, as it were.

Speaking of birds, here’s one of my all-time favourite wildlife photos (out of my own photography that is):

I like this photo because it has so much ‘movement’ and drama. I find it conveys a feeling of how stressful life in a penguin colony can be, especially for parent penguins having to supervise their chicks. The one chick is blaring and the other one is receiving a quick forceful telling off by the adult penguin it seems. This was taken in the Falkland Islands (that’s the dark connection!) at a gentoo penguin colony. They are indeed noisy places, anything but peaceful, further exacerbated by the skuas flying overhead always on the lookout for an unwary chick to snatch during their aerial attacks.

The last but one photo is a great contrast, although it too seems to capture movement of a great force:

This was taken at the ruin of a former school in Japan that has been preserved in its damaged state to serve as a memorial to the tsunami that hit northern Honshu on 11 March 2011. The footbridge toppled by the force of the water kind-of freezes that massive movement in this image.

This featured on the blog as part of the theme post “lights at the ends of dark tunnels”. Again there’s some blur involved, this time created by the strong light contrast and the moisture in the air inside this tunnel. This was taken at the Mimoyecques site in northern France, a WWII relic that was supposed to become a V3-base for showering London with a constant barrage of shells. Fortunately this new “wonder weapon” never worked properly and the site was destroyed before a single shot could be fired.

Now it’s your turn – tell me/us what your favourite photo on this DT blog is in your opinion. Either just choose one from the twelve selected above, or pick any other from the blog’s back catalogue, so to speak, and leave a comment below.