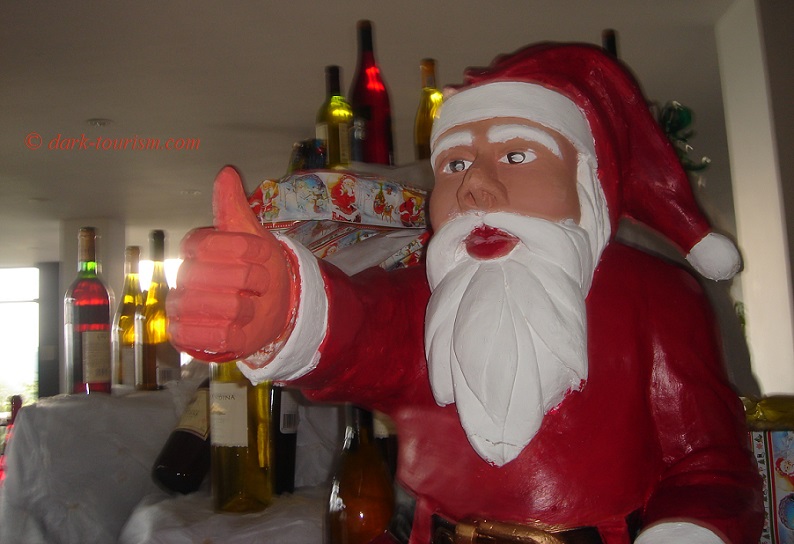 As promised, I’ll try to do my bit to brighten up the Christmas period that for so many of us will be very different this year, much reduced in terms of gatherings with family and friends, due to the pandemic.

In previous years, when we were not visiting our respective families, my wife and I often went travelling at this time of year. Hence we saw Christmas decorations in a wide range of places, including some where you wouldn’t normally expect them at all. It goes to show how globalization has taken formerly localized traditions into most corners of the world.

In the following post I’m giving you another photo essay on this theme. As the first photo I chose a rather normal-looking Christmas tree with all the trimmings and fake wrapped “presents” beneath:

This photo was taken on Christmas Day in 2016 at a hotel in – wait for it! – Bhopal, India! So even this predominantly Hindu and Muslim country adopted the Christian Christmas cliches! The dark link here should be obvious – it was only at the beginning of this month that my blog featured a post about the anniversary of the Union Carbide chemical plant disaster of 1984 in Bhopal.

This next photo was also taken at the same Bhopal hotel, in one of the restaurants, where the somewhat more modest Christmas tree juxtaposes with those martial-looking swords on the wall.

Next comes another Christmas tree, this time complete with a saxophone-playing Santa!

This was taken in a hotel in Mekele, Ethiopia, less than a year ago (so after Christmas), when it was still reasonably safe to go there. This has changed, of course, as a recent post pointed out. Civil war has returned to Tigray, the region that Mekele is the capital city of. Meanwhile government forces have taken this city and the Tigrayan rebels-turned-rulers-turned-rebels have dispersed into the mountains. How the situation is to progress is hard to predict.

The next photo was also taken on Christmas Day, this time in 2008, and again in a rather unlikely location, namely in Phnom Penh, Cambodia:

After we’d visited the Choeung Ek killing fields and Tuol Sleng our guide took us to an orphanage catering school where trainees had set up a big Christmas lunch!!

Next up comes a series of photos from Rwanda – so another very dark place (see Rwandan genocide), which I visited in 2010/11. This was a semi-robotic Santa in a supermarket in the capital city Kigali:

Somewhere else in Rwanda I spotted this Africanized Christmas deco:

It’s a bit odd, though, given that Rwanda is not really known for elephants, but rather for a different species, which features (in the form of a wooden sculpture) in the following photo:

Indeed seeing mountain gorillas in the Volcanoes National Park in Rwanda was the absolute highlight of all the wildlife watching experiences I’ve had on my travels. And there is an additional dark element here: not only are these gentle giants endangered, the person who brought them to world attention the most, Dian Fossey, of “Gorillas in the Mist” fame, was murdered in these mountains on Boxing Day 1985. In addition to gorilla trekking you can also hike to her former research station high in the jungle-covered Virunga mountains and see the remains of the hut where she was killed as well as her grave, and those of some of “her” gorillas.

Moving on to another country, this is a rather odd Santa I spotted in 2006 in Sri Lanka … that raised right arm looks unnervingly a bit like a Nazi salute:

Not quite so grim, but with a similarly raised right arm is this Santa that formed part of the Christmas decorations in a hotel I stayed at in January 2016 in Santo Domingo, the capital of the Dominican Republic:

Back in Sri Lanka, there was also this Santa in a hotel bar:

Speaking of Facebook, before I was purged from that platform together with my DT page (which now only exists in archived form on my website) in April/May this year, I used to post quiz questions connected to a photo most Fridays, and shortly before last Christmas I posted this photo and asked where this is:

The answer was Easter Island (aka Rapa Nui), so I can say I had Christmas on Easter (namely in 2011), on the most isolated permanently inhabited island on Earth, in the middle of the wide Pacific.

And here’s another unusual Christmas tree in a faraway and unusual location:

This tree was decorated with little fluffy penguins wearing Santa hats – which makes sense when you consider where this photo was taken: Ushuaia, Patagonia, Argentina. Ushuaia is not only the southernmost city on Earth, it is also the springboard for most cruises to Antarctica, where penguins are the stars amongst the wildlife. When I was in Ushuaia at Christmas 2013, however, it was not to embark on a expedition to Antarctica (that remains a distant dream of mine, way out of my price range), but because of the place’s link to the Falkland Islands (where I also went later on that same trip, from Chile) and for its ex-prison and museum, as well as a starting point for our onward journey to the Perito Moreno glacier.

Probably the most unusual Christmas tree that I’ve ever seen anywhere is this:

I saw this in the Dominican Republic – it’s a “tree” made entirely out of empty plastic soft-drinks bottles (and a bit of wire) and could be a monument to worldwide plastic pollution!

And also in Santo Domingo, Dominican Republic, I spotted this highly unusual nativity scene, made out of rusty iron sculptures:

Staying in the Caribbean, but on a different island, namely Antigua, I had this bizarre encounter on Christmas Day 2009:

This Santa was being taken by inflatable boat to some other resort, presumably for some Christmas party, but I found this image a most peculiar juxtaposition: Santa in his red winter coat and hat in the middle of warm, blue lagoon water.

By the way, those of you who know me are probably aware that I am not a beach holiday kind of person, so what was I doing on Antigua? Well I used it as a (necessary) stopover en route to neighbouring Montserrat, the volcanic island that is half covered in volcanic ash, from series of eruptions that started in the mid-1990s, and features the sunken ghost town of Plymouth, the “Pompeii of the Caribbean”. So there you have your dark link.

The next photo brings us to another island, and for the first time to Europe – this was some Christmas deco at a hotel in Valletta,  Malta, in January 2019:

On Malta there was plenty of over-the-top Christmas deco still about in January, including this pair of illuminated reindeer outside another hotel:

By far the biggest single item of Christmas deco I’ve seen anywhere is this giant Christmas bauble, an installation on a square in Lisbon, Portugal:

This photo was taken in January 2013, when I was in Lisbon briefly as a stopover before my flight to Senegal, from where I then flew on to the Cape Verde Islands.

Despite (or because of) its inflated size, I found that monster Xmas bauble quite classy. But the most extreme in Xmas kitsch overload I encountered back in India:

I saw this as part of a colonial-heritage tour of the city of Etawah in Uttar Pradesh, which also included a short visit to one of the comparatively few Christian churches of the region, which played an important role in the 1857 uprising (or “mutiny” as the British colonial masters called it). The degree of over-the-top kitschiness of the decorations in the church’s garden was so incredible that I give you another photo from there:

And a final one from India, this time from a hotel lobby in Agra, also in Uttar Pradesh (but more famous for the legendary Taj Mahal):

Note that next to the Christmas deco involving several plastic snowmen, there is a resident astrologer offering his services! I wonder what you could ask him? Will there be snow for Christmas this year here in India?

But, for the final photo, let’s head home – so in my case, to Vienna, Austria, where I’ve lived for more than the last decade and a half. In the heart of the central First District, above the posh shopping street Graben, hang these fantastic chandelier-like decorative light fixtures.

They appear every year, and even after all this time I still find them rather classy.

And with that I’ll come to a close.

Merry Christmas everybody! (… as much as that is possible under the circumstances this year.)