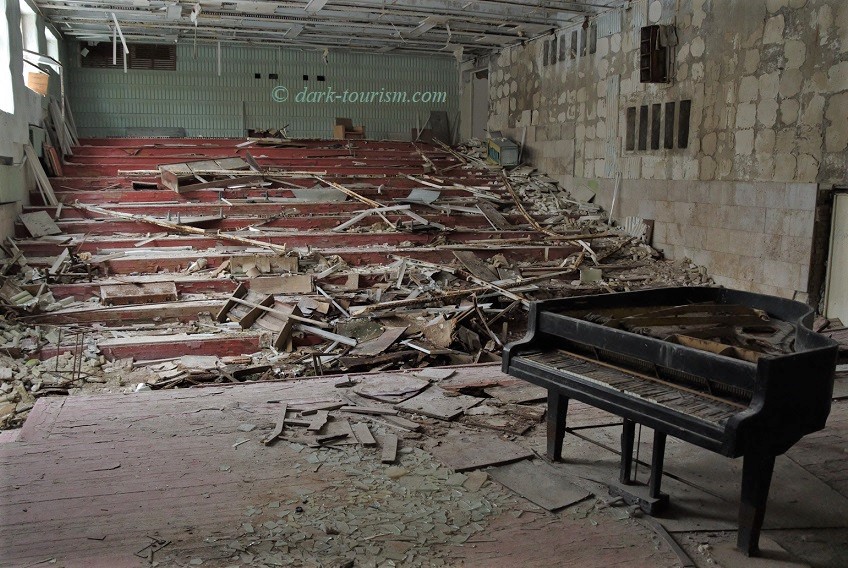 This photo I took aeons ago (well, in the early 1980s) at Highgate Cemetery East in London. This is actually a scan of an analogue photo print. At that time the eastern part of this legendary old Victorian cemetery was still freely accessible whereas the enchantedly overgrown western section could only be visited by guided tour.

The Thornton grave used to have an open lid on the stone piano too, but that got destroyed by vandals. Maybe it’s a good idea, then, that access to the eastern part is now controlled too.

So with a piano-tombstone in a cemetery the dark connection was pretty obvious, but with many other pianos the dark association is simply through the location they are found in, such as in this photo taken at a piano storage facility in Pripyat, in the Chernobyl Exclusion Zone in Ukraine:

When the inhabitants of Pripyat were evacuated in the wake of the nuclear accident at the neighbouring Chernobyl NPP, many people left valuable large objects that they couldn’t take with them in a secure storage space. There’s also a storeroom for TV sets next door to this piano room. Of course the people never returned and so the pianos became increasingly exposed to the elements and began rotting away. You can see that this upright piano is clearly beyond repair.

This is also evidently true for the grand piano on the stage of the former music school in Pripyat (same as the featured photo at the top of this post):

This is an absolute classic shot – and a very similar one featured once in a newsletter email announcement by Experience Travel Group about an online talk by the author of a recently released book entitled “The Lost Pianos of Siberia” … In a reply I pointed out that this was not a piano in Siberia. See this follow-up post on ETG’s blog! (External link, opens in a new tab).

Obviously you can’t really play those Chernobyl pianos any more, but many still have their strings, and you can pluck those to create some weird out-of-tune “avant-garde”-like music. I had a go at that with this grand piano and again at another lost piano inside Chernobyl-2 by the Duga radar. Here’s a download link to the video I took of that …

Another Soviet-era grand piano that is remarkably in much better shape (though also out of tune) is this one:

I found this piano at an extreme location, the former coal-mining settlement of Pyramiden that the Soviets, and later the Russians, operated on the island of Spitsbergen of the Svalbard archipelago in the high Arctic. This settlement and mine had a special legal status based on a treaty from the 1920s. So it came that the Soviet Union had settlements and mined coal in a territory that is owned by Norway, a NATO member and hence an “enemy country” for the USSR during the Cold War! But apparently relations were good even in those times.

This grand piano in the abandoned “Gagarin” cultural centre of Pyramiden is in fact the world’s northernmost. I saw it during a guided tour of Pyramiden on my birthday in 2012. Actually, I didn’t really see it properly. I was just about able to make it out in the totally dark concert hall. This photo was taken with the camera stabilized, the shutter released by self-timer and with an exposure time of about 2 to 3 minutes. That way the residual light was amplified and brought out the stage, the curtain, the piano and the numbered seats that you could barely see with the naked eye!

But now to the other side of the former Cold-War-era divide, the USA. This grand piano stands in one of the halls of the large luxury hotel The Greenbrier in West Virginia:

The dark connection here is that under one of the wings of The Greenbrier a fallout bunker was constructed that was to serve as the relocation facility for the US Congress in the event of a nuclear war! When the shelter was finally completed it couldn’t really have served that function any longer, though. By that time ICBMs had reduced the forewarning time to just half an hour max, and The Greenbrier is too far from Washington D.C. for anybody to make it there in that short time. The formerly secret facility became publicly known in the 1990s and was subsequently opened up for anyone to see, albeit only on guided tours that have to be pre-booked.

And now off to Britain. Guess what the dark link is with this grand piano:

The dark association is rather indirect but intriguing. This piano stands in a corner of the grand dining room of the White Swan Hotel in Alnwick, Northumberland. The wooden panelling and other interiors come from the former first-class lounge of the RMS Olympic, the sister ship of the tragic Titanic! When the Olympic was scrapped, the interiors were sold at auction and the owner of the hotel grabbed the chance. Whether the piano was also part of the package I don’t know. I rather doubt it, but you never know …

Staying in Britain, this is an upright piano in a pub reconstruction at Bletchley Park:

Bletchley Park was the formerly secret place where Alan Turing and his team of cryptologists managed to break the code of the legendary Enigma cypher machine of Nazi Germany. And this probably had more influence on the outcome of World War Two than any single military operation. Today Bletchley Park is open to the public and offers a fascinating insight into the subject matter (you need two days to see it all!). The sheet music on the piano in this scene, by the way, is the song “The Things I Love” by Harold Barlow and Lewis Harris released in 1941, so fitting for the period depicted.

This next upright piano, inside a glass display case, is dark in more than one way:

This piano I found on display at the Tigrayan Martyrs Museum in the city of Mekele in northern Ethiopia, when I visited that country in December 2019/January 2020 (my last overseas trip before the outbreak of the pandemic). The English translation of the label read “A piano that captured from the enemy in 1977” (sic!). That enemy would have been the Derg regime that terrorized Ethiopia back then but that was eventually overthrown mainly through the efforts of the TPLF, the Tigrayan People’s Liberation Front (not the People’s Liberation Front of Tigray, mind you! 😉 ).

But, as has been pointed out on this blog before (twice, in fact, namely here and here), power has shifted and the TPLF was pushed out by the new leader Abiy Ahmed. He then proceeded to launch an all-out military attack on the Tigray province last November in an attempt to stamp out the TPLF altogether. The result is an ongoing humanitarian catastrophe with atrocities, systematic mass rape and a large-scale refugee crisis, while the TPLF have retreated to the mountains and now rely on guerrilla warfare tactics. What happened or what will happen to the Tigrayan Martyrs Museum, which is basically a celebration of the TPLF’s past successes, I have no way of knowing. Mekele, the capital of Tigray, where the museum is located, is under government control, that much seems clear. Whether that has led to any iconoclasm or revisionism in this museum is not yet clear.

And here’s another upright piano, this time far away in east Asia, namely in Japan:

This piano stood in a corner of a cinema and conference hall at a museum in Tokyo, which is primarily about the conventional bombing of the city by the USA in WWII. These bombing raids actually resulted in more fatalities and destruction of housing than either of the atomic bombs caused in Hiroshima and Nagasaki. Yet Tokyo had no commemoration of these raids and their victims until this small private “grass-roots” museum opened in 2002.

What the role of the piano is, I do not know, maybe it’s just a regular piano used at gatherings or events. In any case the folder of sheet music by Schubert shows the Japanese love of German classical music.

The final piano in this post comes from a decidedly dark context, and again with a German link:

This was taken at one of the museums about the Battle of Stalingrad in what is today called Volgograd. There’s a grand official one full of uniforms, weapons, medals, maps and all those military things, while the smaller Museum Pamyat (‘Memory Museum’) in the basement that used to be German general Paulus’ HQ during the battle is more focused on the human side, in particular the German one. This life-size diorama in this museum depicts the desperate attempts at celebrating Christmas in the precarious situation the Germans found themselves in by that point, with total defeat only weeks away. So for many soldiers it will have been their last Christmas.

The diorama includes boxes marked “Christmas greetings”, “Merry Christmas” and “from west to east”, and the sheets of music on the piano are German Christmas carols, including “O Tannenbaum” …

But so much for dark tourism & pianos. I hope you enjoyed this rather unusual theme.