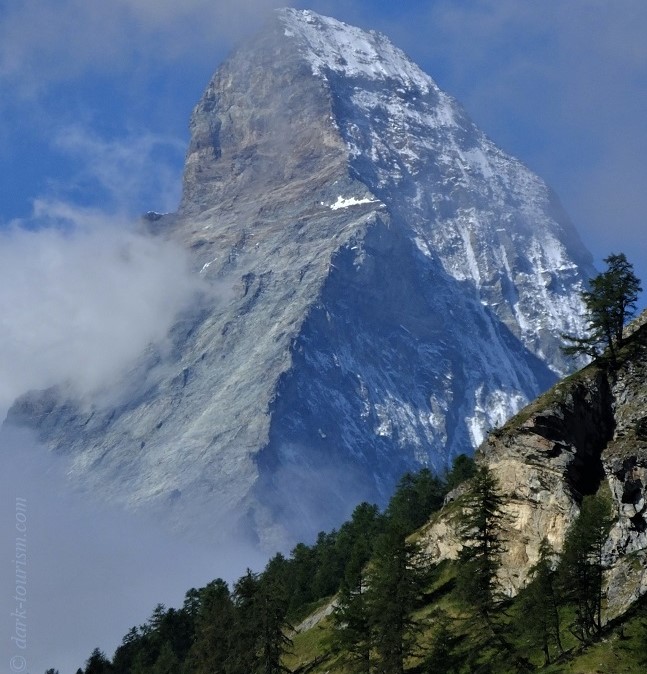 It’s not so long ago that I reached the magical numbers of the 100th Blog post and then the 1000th destination chapter on my main website. Now I don’t have a neat figure, but still another momentous milestone to report:

For the first time ever, i.e. since I started working on my dark-tourism website project almost 15 years ago, I am fully caught up on all the material from my own travels. All this time I had always been more or less behind (at some points quite seriously behind – years!). Now I’ve reached what at the moment is the finishing line, as it were. Of course there will hopefully soon come new travels yielding new impressions and more travel photos and hence new chapters to write up. But for a brief time window I can enjoy the feeling of having made it to the (provisional) finish.

The (for now) final chapter in question is one that was left over from my summer trip to Switzerland in 2020, namely the one about the Matterhorn and Zermatt. The featured photo above is one of the many I took of the mountain. That was on the morning of my departure from Zermatt (the town nearest the foot of the Matterhorn) and it was a lucky shot showing the east face of the Matterhorn in sunlight – the only moment I had that chance, because on the other days I was there the peak was always at least semi-obscured by clouds and the summit kept clinging on to some cloud until the later afternoon/evening. But on that occasion the clouds briefly dispersed sufficiently for that photo to become possible.

Here’s another photo of the Matterhorn, also taken from Zermatt, this time in the evening at moonrise with a hang-glider atmospherically soaring in the sky overhead:

In my late childhood/early teenage years I had an obsession with “armchair-travelling” on maps/atlases, already imagining myself in all manner of foreign places (in real life my family was too poor then to travel much abroad, apart from cheap holiday bungalow rentals in Denmark and then later sailing in the Baltic Sea aboard a small yacht). I was also fascinated with the age of the great explorers … Scott of the Antarctic, say, or, much later, Edmund Hillary’s first ascent to the summit of Mt Everest. I didn’t know so much about all those British people involved in “alpinism” in the 19th century, but I was quite aware of the stunning Matterhorn, the “Berg der Berge” as it’s sometimes called in German (meaning basically ‘the mother of all mountains’). Seeing that most iconic peak in the world became a dream of mine. But somehow I never followed it up. Until August 2020, that is. Indeed, the Matterhorn was the first place on my wish list when my wife and I decided to add a rail trip through Switzerland that summer (to replace the original plan of going to Namibia, which had to be postponed due to the pandemic). And I must say, seeing the Matterhorn finally with my own eyes did not disappoint, even though I did not get a photo with the fabled reflection in the Riffelsee lake on the Gornergrat, because a) the water surface wasn’t smooth enough, and b) the summit of the Matterhorn was still shrouded in a persistent cloud:

These views are the famous angles (that are said to have inspired the shape of a well-known type of Swiss chocolate) of the Matterhorn, but I also saw it from a less iconic angle, namely from a neighbouring peak, the Klein Matterhorn (meaning “little Matterhorn”, even though it’s still quite a biggie, at almost 4000m/13,000 feet), showing the south and east faces (the south being across the border in Italy):

I should perhaps briefly reiterate why the Matterhorn can count as a dark-tourism destination in the first place: That’s because it’s one of the deadliest peaks in the world! Over 500 climbers are estimated to have lost their lives trying to conquer it, even today such fatal accidents still average at about 10 to 12 annually!

Amongst the casualties are four out of the party of seven climbers led by Edward Whymper on the very first successful ascent to the summit in 1865. On the descent, one climber lost his footing, and dragged three more down the sheer rock face where they tumbled to their deaths. This is still a tragedy well remembered, including in Zermatt, where there are several plaques commemorating the events. And in the Matterhorn Museum in Zermatt, the exhibition includes some artefacts relating to this tragedy, including some personal belongings of Whymper’s perished alpinist companions of 1865:

In the nearby churchyard of Zermatt’s St Mauritius Church is a dedicated “Bergsteigerfriedhof”, or ‘mountaineers’ graveyard. The graves of some of the legendary climbers of the first ascent of the Matterhorn are located here, together with some 50 others, all casualties of alpinism on the Matterhorn and surrounding other mountains. There’s also a “grave of the unknown climber”, and some graves are adorned with mementoes, such as this one:

Shortly before I uploaded the Matterhorn and Zermatt chapter, I also finished the rest of the handful of chapters for Switzerland, such as for Zürich (with two subchapters) and another Alpine one, namely about the Jungfraubahn. I had also written a Blog post about Switzerland shortly after my return in August 2020, and that features a few photos from there too, so I can refer you to that as well.

But so much for Switzerland. I’m now looking forward to new travels …